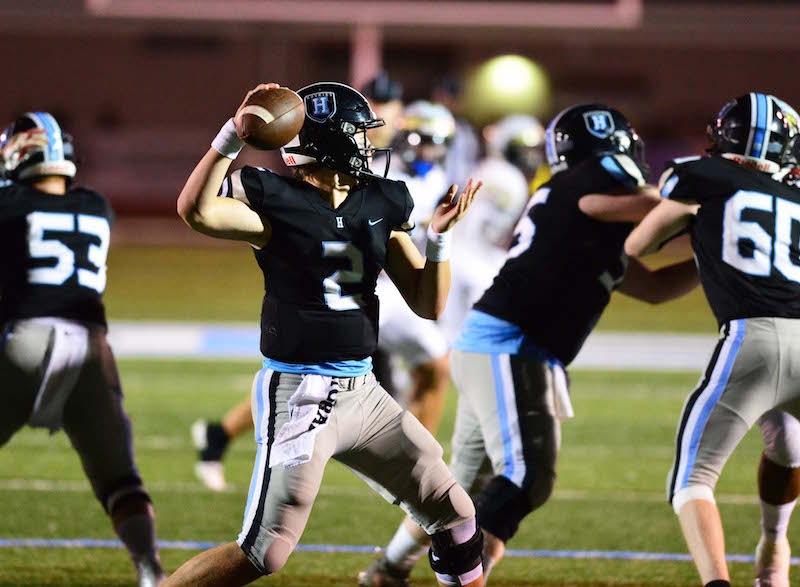 The Helena Huskies finished region play a perfect 6-0 and improved to 9-0 overall on the season with a 22-15 win against Stanhope Elmore on Friday, Oct. 15. (For the Reporter/Jeremy Raines)

MILLBROOK – Helena’s Mac Turner ran in an 11-yard touchdown with 34 seconds remaining to lift the Huskies to a 22-15 win over Stanhope Elmore on Friday, Oct. 15 and help them finish region play undefeated.

The win continues Helena’s school-best nine-game winning streak, as the Huskies have one more regular season game remaining, at UMS-Wright on Oct. 29, before the playoffs begin.

The win also gives HHS its second perfect 6-0 region record in three seasons (the other was in 2019).

Helena struck first on Friday, with Jordan Washington running in a 2-yard touchdown with 1:07 remaining in the first quarter. Entering with four consecutive 200-plus yard rushing performances, the sophomore back had another strong night on the ground with 21 carries for 105 yards.

Stanhope Elmore (4-4, 2-3) tied the game at 7-7, and that was all of the action until the final quarter. The game remained tied until the fourth quarter, when Turner passed to JC Sivley for a 35-yard touchdown.

Stanhope Elmore answered quickly, however, with 4:48 left to play on a 4-yard run, and then the hosts took a risk and went for a 2-point conversion and the lead.
It paid off, and Stanhope Elmore took its first lead of the game at 15-14.

HHS had just enough time to pull out the win, however, on the Turner 11-yard run and added its own 2-point conversion for good measure.

It marked the fifth win in a row by 10 points or less for the Huskies.

Turner completed 14 passes in 24 attempts for 96 yards.
His favorite targets were Sivley (five catches for 54 yards) and Nathan Wade (seven for 34).

Joseph Roberto, Justin Yunke, Jackson Snyder and Hunter Hale were everywhere for the Huskies defense, with 8.5, 6, 5.5 and 5.5 tackles, respectively.

Helena has a bye week next week before finishing the regular season with UMS-Wright.