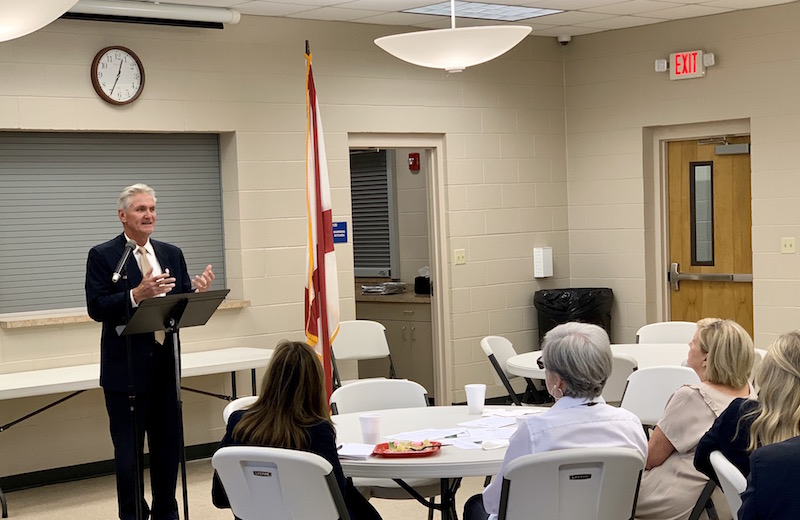 Picklesimer started his state of the city address by saying Chelsea is in good shape financially.

“We enjoyed a great year from the standpoint of revenues seeing growth in most all business categories in our city,” he said. “Our fiscal year ended Sept. 30 with almost 5-percent growth in revenues.”

Picklesimer compared the city’s first budget of $37,000 in 1996 to the current budget as a sign of ongoing progress.

The road project to realign the intersection of Shelby County 47 and Shelby County 39 is expected to finish in early 2022, according to Picklesimer.

“This project, along with all of the other projects, were delayed by the incessant rain that we endured this summer,” he added. “The splash pad was delayed opening by a couple of months, but had a terrific season. The numbers of people that visited were huge, and our staff did a great job of opening the park.”

Work is still happening on Phase 2 of the Highway 11 sports complex, and city leaders are in the planning stages of the amphitheater to be constructed at Melrose Park.

This year’s budget includes $2.5 million for the addition of a second gym, a locker room and two racquetball courts at the Chelsea Community Center.

In a restructuring of the community center’s management, Parks and Recreation Director Bart Pettus is now the center’s director, and Jane Ann Mueller and Mark Glausier are managing the daily operations of the facility.

Many new businesses have opened in Chelsea in recent months, including Chicken Fry’d, AutoZone and RaceTrac, and others like Buffalo Wild Wings, Arby’s and Habaneros are under construction.

“Our retail and commercial growth continues to thrive,” Picklesimer said. “We continue to do about $2 million a month in food sales in our city.”

Picklesimer also talked about the recent news of plans for a hotel to be built on property behind Buffalo Wild Wings and Arby’s.

“The Auburn Hospitality Group submitted plans for a beautiful new La Quinta hotel to the Planning Commission at our last meeting in September,” he said. “It will be an 80-unit hotel with a meeting room and all of the expected amenities.”

With ongoing growth in population, the city has partnered with the Criterion Group to conduct a feasibility study to explore the idea of Chelsea forming its own city school system.

Picklesimer said the results of the study are expected to come back in November.

In recent months, discussions about the possible annexation of nearby communities, such as Dunnavant Valley, into Chelsea have revealed mixed feelings about the issue.

“These discussions and public meetings in Mt Laurel have led to the decision to take the annexation of Dunnavant Valley off of the table,” Picklesimer said. “This will reduce the student count of our proposed system by just over 1,000 students if we are successful in the merger of the city of Westover.”

Picklesimer said he has discussed potential annexation with Westover Mayor Larry Riggins and other city leaders, and his request is to “let the citizens of Westover have a vote to determine if they want to be a part of our city school system should the numbers return favorable for us to proceed with the project.”