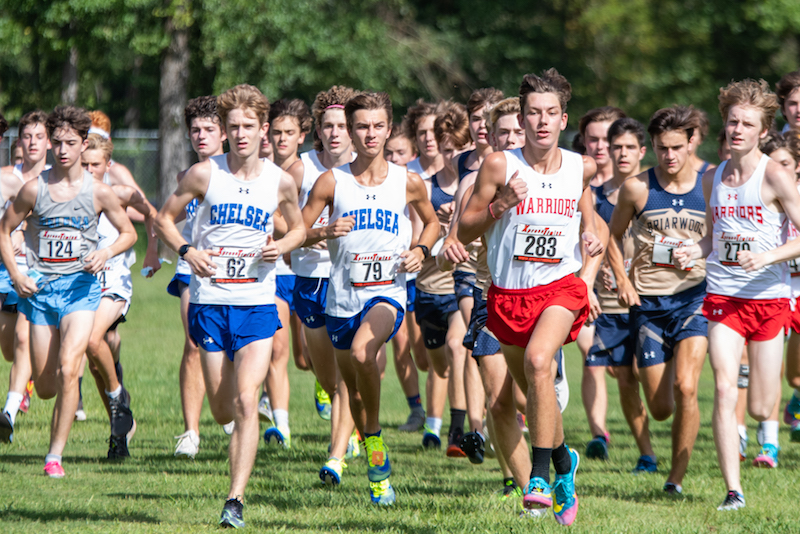 Chelsea’s Miles Brush and Thompson’s Jackson Hamlin were two of several local runners to finish inside the top 10 at the Randolph Inviational with Brush winning the event. (File)

HUNTSVILLE – Another race has come and gone, and another race saw the same familiar faces put together noteworthy performances on Thursday, Oct. 14.

Competing in the Randolph Invitational at John Hunt Park in Huntsville, Chelsea’s Miles Brush and Cady McPhail continued their torrid start to the season with top-three finishes in the event, while Thompson’s Jackson Hamlin, Chelsea’s Elijah Williams and Briarwood’s Mary Grace Parker all left their mark as well.

Once again, however, the day belonged to Brush.

The senior runner at Chelsea High School dominated the field to win by more than 30 seconds. He finished the race in his fastest time of the year with a mark of 15:01.47, which beat out second by 37 seconds.

Brush, the defending 6A state champion, has now finished first in three consecutive events and has a sixth-place finish at the Southern Showcase, which featured some of the best runners from around the country.

He has now run every race in less than 15:30 this season.

Grabbing a podium finish in the boys race alongside Brush was Hamlin, who also continues his best season with the Warriors.

The senior took third thanks to a time of 16:03.61, which marked his second top-three finish this season and his second-fastest time this season.

Joining those two in the top 10 was Williams—another Chelsea runner.

Williams set a new personal record by finishing the race in 16:40.90, which gave him his second top-10 finish of the season in ninth.

On the girls side, two runners also finished inside the top 10, while McPhail claimed a top-three finish.

The junior for the Hornets claimed her third top 10 of the season and second top-three finish by claiming third with a time of 19:24.40.

Briarwood’s Parker was the only other runner in the girls race to claim a top-10 finish. She finished ninth thanks to a time of 20:12.61.

Her strong showing was one of several highlights for the Lions, who finished third in the team standings, while Chelsea claimed sixth and Thompson finished in eighth.

Chelsea’s two finishers inside the top 10 of the boys race helped the Hornets finish second there, while Thompson claimed fifth and Briarwood 11th.

Other local runners to finish inside the top 30 of the boys race included Cameron Prosser, Andrew Fielding and Aden Carter.

Fielding was Chelsea’s other highlight thanks to claiming 24th with a time of 16:58.41. Chelsea’s Thomas Ludwig and Parker Campbell both finished inside the top 50, while Thompson’s Ian Boackle and Briarwood’s Brandon Dixon did the same.

In the girls race, Briarwood’s Bela Doss finished inside the top 20 after running the race in 21:37.19 to claim 18th.

Briarwood’s Lena Anne Parker, Zoey Eighmy and Luci Williams all finished inside the top 45, while Thompson’s Whitney Clark did the same by claiming 43rd.