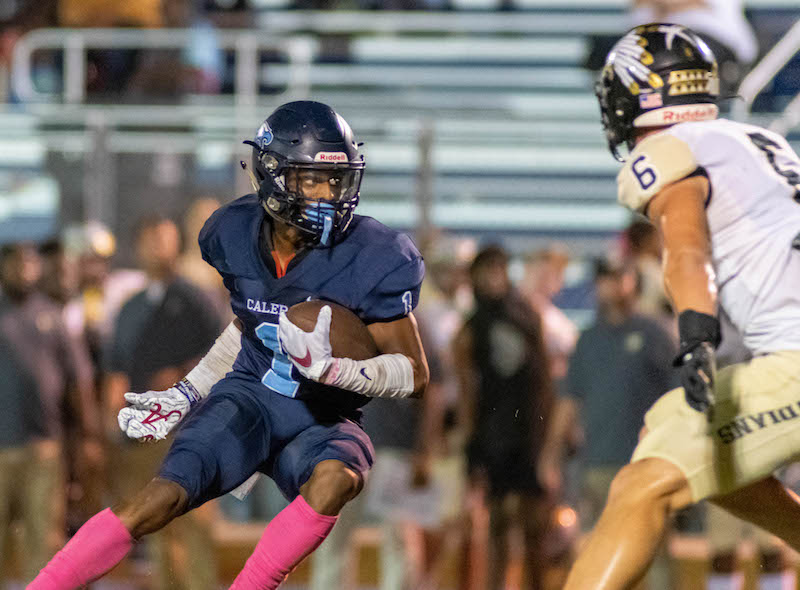 The Calera Eagles will look to finish off region play with one more win this Friday against Benjamin Russell. (File)

The final week of region play is upon us, and a lot is on the line for several teams. Not only do we have a top-two battle between Thompson and Hoover for the region championship, which is broken down in its own preview story, but we’ve got several teams battling for playoff spots or seeding.

A total of eight teams have already clinched playoff spots, but there is still a chance for two more to get in as well, while others already in the playoffs are looking to keep momentum going and improving their seeding for an easier first-round opponent.

Going into last week, it looked like Oak Mountain would have a great chance to win this battle with Hewitt-Trussville, but things change quickly, and now the Eagles are likely without star quarterback Evan Smith for the game. However, Oak Mountain’s defense should still make this a game. The Eagles are still only giving up 15.8 points per game, while Hewitt has struggled against the best defenses it has played, scoring 10 against Hoover—a team the Eagles put up 21 against—and nine against Thompson. The Huskies are scoring 37 points per game, which is eight more than Oak Mountain, but the Eagles are giving up eight points less per game. The Huskies have struggled the last two weeks, narrowly escaping both Gadsden City and Vestavia Hills. I think Oak Mountain’s defense will continue to make life tough for Hewitt’s offense, but ultimately, Smith meant too much to this team for the Eagles to win this week without him. Oak Mountain 14, Hewitt-Trussville 21

Neither of these teams has won a game since their season-opening wins during the first week of the season. Tuscaloosa County beat Paull Bryant 59-34 that week, but the Wildcats haven’t scored more than 16 since and have given up 21 or more each week since. Spain Park won its opener 37-13 against Huntsville, but has struggled since as well. The jaguars, however, have looked slightly better on both sides of the ball and get this game on their home field. They’re scoring 14.4 points per game and giving up 36.9, while Tuscaloosa County is scoring 12.8 and giving up 42. Spain Park 31, Tuscaloosa County 21

Calera is in the postseason for the first time in Class 6A after last week’s thrilling 34-29 win against Wetumpka, now the Eagles look to continue the momentum with a win against Benjamin Russell this week. Having already locked up the three seed, Calera was a combined 14 points from winning this year’s region championship, which shows how talented this team is. Now, they get a Benjamin Russell team that is 2-6 on the season and scoring just 18.4 points per game while giving up 27.8 per game. Calera has won the last two weeks without the offense playing as good as it can, which shows what the defense has been able to do. Expect Preston Stokes, Kobe Prentice, Braylyn Farrington and others to have a big night offensively this week, while the defense should continue showing just how talented it is. Calera 31, Benjamin Russell 17

My judgement may be off, but watch out for a possible upset here. Mountain Brook, the No. 3 team in Class 6A, has already locked up the region championship, and this marks the final regular season game of the season for the Spartans. There is no reason for them to take any chances ahead of the playoffs, while Chelsea is playing its best football of the season. The Hornets, following an 0-4 start with several games they almost won, have now won four in a row to even their record. The offense has scored 31 or more in five of six, while they have scored 35 or more in four of those games.

Now, the defense is coming off its best performance of the season in a 17-6 win against Shades Valley. Mountain Brook is the better team on paper, scoring 32.8 points per game and giving up just 10.3 points per game. It will take a strong effort from the Hornets, but this seems like a good spot for them to have a shot at the Spartans. Scoring 29.3 points per game, the offense will have its hands full against a good defense, but they have the playmakers at receiver to at least test Mountain Brook’s defense. Chelsea’s defense has to set a physical tone that they won’t back down early in this game, which could make the difference in keeping it close. Don’t be surprised if this one is tight in the fourth quarter. Chelsea 17, Mountain Brook 28

Coming off a bye week, the Pelham Panthers will close region play with a matchup against Chilton County. The Panthers shouldn’t have any issues in winning, but lose focus and anything can happen. The Tigers are 2-6 right now and scoring just 17.8 points per game, while Pelham’s defense has given up 14 in back-to-back games and 21 or less in five of eight games this season. Chilton has also been held to 14 or less in two straight games. The defense of the Panthers should make the difference, but the offense still needs to show some consistency as we near the postseason. Expect a since of urgency on that side off the bye week as well. Pelham 35, Chilton County 14

It’s a big week for these two teams for the second year in a row. The winner will get the two seed going into the playoffs, giving them home-field advantage and an easier matchup in the first round, while the loser will have to hit the road. But Briarwood is coming off a bye week following its 14-0 loss to Mountain Brook two weeks ago, while Homewood lost 49-14 to Mountain Brook last week. The Patriots have now lost two in a row and have scored 14 or less in those games, and they’ll now get a Briarwood defense giving up 17.3 points per game. The Briarwood defense looks to be reaching a good point, and I think the Lions show that in a strong effort on that side. The offense has dealt with injuries, and Christopher Vizzina is going to have to find someone who can make plays downfield, but Ethan Anderson adds enough of a top target for now with Jay Butler done for the year and Luke Reebals still trying to become fully healthy. Briarwood 28, Homewood 14

The Shelby County Wildcats have a lot on the line this week. A win this Friday against Jemison and a Selma loss to Demopolis would give the Wildcats the two seed and home-field advantage in the first round of the playoffs, while a loss could keep them out of the postseason. Expect Shelby County to know that and for this team to capitalize on playing a 0-8 Jemison team that is struggling to score points. Shelby County is playing well defensively right now, giving up 22 or less in three in a row and five of six. The Wildcats have struggled offensively at 16.1 points per game, but Jemison is giving up 41.4 points per game. Shelby County should hold a strong advantage in this one. Shelby County 34, Jemison 14

It’s another year and another chance for Montevallo to win its region finale to claim the three seed going into the playoffs. The Bulldogs sit at 6-2 overall and 4-2 in region play, but now get a 3-3 Dallas County team looking to create chaos in the region standings. That said, Montevallo is playing its best football of the season with four wins in a row. The Bulldogs are scoring 35.3 points per game and going up against a defense that is giving up 32 points per game. With Joseph Anderson playing so well and others like Kial Cottingham starting to make more plays as well, this offense should have another big night with 37 or more in their last four games. Defensively, the Bulldogs are giving up 20.3 points per game and have given up eight or less in three of their last four. That will make it tough for Dallas County to keep pace. Montevallo 35, Dallas County 20

Vincent’s path to the playoffs is as confusing as anyone. Simply put, the Yellow Jackets need to win and take care of business for their best shot. Taking on LaFayette, it won’t come easy, but the two teams are pretty similar on paper at 5-3. The Jackets are scoring 30.8 points and giving up 25.5 points per game, while LaFayette is scoring 31.6 and giving up 24 per game. LaFayette, however, is playing best football of the season, scoring 33 or more and giving up 22 or less in last three in a row, while Vincent has lost two of three. I think this is going to be a battle to the finish, but LaFayette has the momentum right now, which may make the difference. Vincent 20, LaFayette 27

Cornerstone will enter this matchup against the region leader fresh off a bye week, but it will be a tall task against a Lowndes team that is scoring more than 30 per game and giving up 15.9 per game. The Chargers are flipped around, scoring just 16.6 per game and giving up 33.1. Lowndes is coming off a 47-0 victory against Coosa Valley, who the Chargers lost to a few weeks ago. Cornerstone 7, Lowndes 35

The Evangel Lightning bounced back in a big way last week with a 62-7 win against the Tennessee Heat. Now, they’ll travel to East Central Homeschool looking to earn a spot in the ACSC State Championship. The Lightning, who are playing well defensively, will get an East Central team struggling to score points off back-to-back losses. Expect Evangel to put forth another strong effort this week. Evangel 48, East Central 15