CMS Student Body Responds to the Love of Maddie Howard 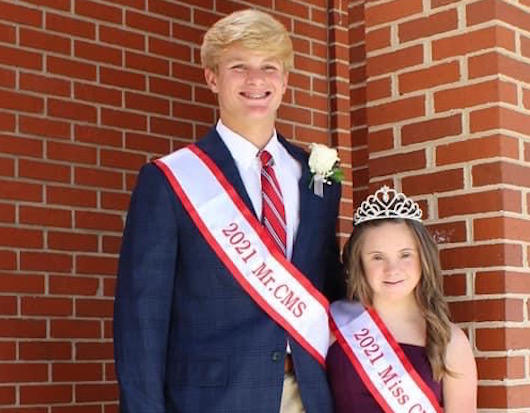 The air was full of Wildcat Pride at the Homecoming pep rally for Columbiana Middle School on Thursday, October 14th. The theme for the game was Pink Out to raise awareness for breast cancer research. The student body donned everything from pink tees to pink face paint cheering as loudly as they could. Right in the center of it all were eighth-graders Maddie Howard who was generously blowing kisses to the crowd and Cooper Pennington; the new reigning Mr. and Miss CMS of the 2021/22 school year.

Mr. and Mrs. CMS is a yearly tradition each year that is student body driven. This year, it was the eighth class in particular that campaigned hard to make sure that local favorite, Maddie Howard had the honor of representing their school in the following week’s homecoming parade.

“Maddie is special,” eighth-grader Cameryn Murray told us when asked about the student body vote. “She is so sweet to every single person in the school, and we knew she deserved this.”

One might think that Maddie Howard has had it easy to hear the community express their love for her, but that’s not exactly the case. Born with Downs Syndrome, Howard had a very precarious beginning that started in the NICU due to birth complications. After surviving that, at age seven she was diagnosed with Leukemia and endured two long years of treatments that required her to practically live at Children’s Hospital because of her Downs Syndrome. She’s an overcomer though and did beat her cancer.

“Maddie has always had a way with people,” her mother Amanda Howard shared with us. During her treatments, when nurses had to poke and prod and hook her up to machines, she would cry when they had to stick her with needles, but then when it was over she would take her nurses’ hands and kiss them and tell them ‘thank you.’ She won the heart of every one of her caregivers right away.” It’s this kind of sweetness that won the hearts of her peers at school too.

Cooper Pennington, her counterpart in eighth-grade royalty, beamed as he confirmed this. “It’s hard to be sad around Maddie. I remember a couple of years ago I was really upset about losing a big game, and Maddie just came in and smiled and gave me a hug. I just couldn’t stay upset. That’s what she does.” It should be noted that Pennington is quite the leader at his school too. A student-athlete that hopes to run his own business one day, Pennington is excited to get to represent his school and is excited about the future of CMS under the leadership of their new principal Justin Smith.

When we asked her mom what it meant to her to see Maddie win with the love of her whole class she told us with eyes brimming, “It means the whole big fat wide world to me. So often kids like her are picked on and what she experienced was nothing but love. There are no words to describe it.”

We got the chance to chat with Maddie Howard after she and Pennington were presented at halftime during the game that evening, and she told us that she was most excited about getting to toss candy to her friends in the parade on October 22nd. “Chocolate is my favorite. I really hope the candy is chocolate! Let’s do this!” We think it’s safe to assume, her fans would likely agree but will love seeing her represent their school no matter what.