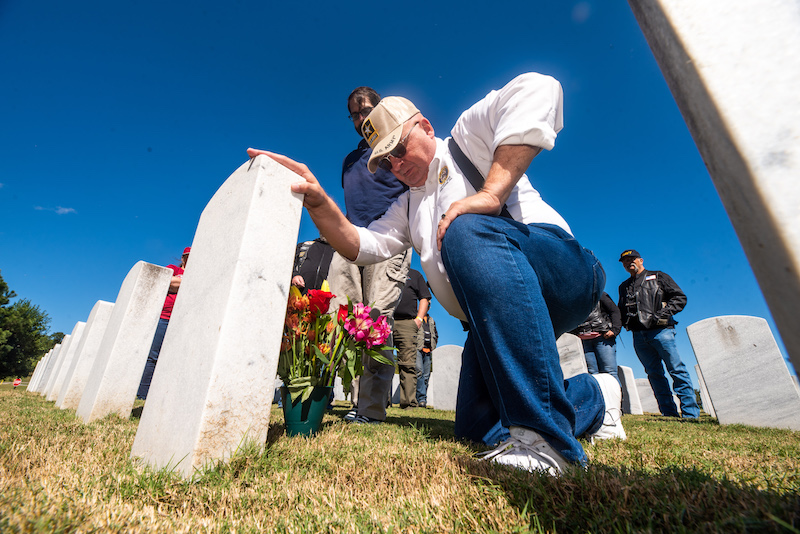 It was a particularly beautiful Saturday on Oct. 16 as the riders of the Matthew Blount Post 555 Memorial Ride assembled at the Heart of Dixie Harley-Davidson in Pelham. The weather faired much more enjoyable for the event than its previously scheduled date.

“We are so blessed,” said Barry Blount, the father of Matthew Blount, the memorial ride’s namesake. “Last time when we scheduled it, we could have done the backstroke through the parking lot.”

“It’s very humbling that everyone came out here today to support the memory of Matt, support American Legion 555 and to be a part of this brotherhood,” said Matthew’s brother, AJ Blount.

For the past five years, the memorial ride has been held in honor of Matthew Blount, who served as a medic in the United States military. The ride is held by the American Legion Matthew Blount Post 555, which was also set up in Matthew’s honor. Matthew passed away from complications due to a severe and rare form of cancer, and the event is held every year on the Saturday closest to his birthday.

The ride begins in Pelham and travels out to the Alabama National Cemetery in Montevallo. All proceeds go to benefit the veteran charity of Wreaths Across America, which provides wreaths for veterans’ tombstones during the holidays.

“Our post every year sets a goal or a benchmark,” said Post Commander Jeff Monday. “This year was like $4,500. We try to keep it localized because while it is a national event across the United States, if we keep it local it helps our cemetery.  We’ve done other events before in his name, but this always seemed a little more fitting. He was the kind of guy that liked motorcycles as well.”

Monday said events held the past couple of years haven’t felt the same due to COVID-19.

“People were just not getting involved because everybody was staying at home due to COVID, and last year it went on but it was like with an asterisk next to it – it wasn’t the same,” Monday said.  “This year seems like it’s going to be back on as normal, though.”

According to Barry, in two and a half years after they started the Matthew Blount Post, they were the largest post in their district out of 13 posts.

Once riders reached the National Cemetery in Montevallo, AJ, described himself as his brother’s “little twin” growing up.

“We were inseparable for the longest time,” he said.

AJ described his brother as a “very strong Christian,” and said “everything he touched turned to gold. If you needed anything, Matt was there 24 hours a day. There can’t be enough said about him…there really isn’t anything negative I could say about him.”

AJ then shared a story about his brother that spoke of Matthew’s strength of character.

“Matt left for basic training right after high school to join the army, and 10 years after active duty he called me up one day and said, ‘AJ, we’re going to college,’ and I said, ‘You got it, pal. You come here and show up and whatever college you want to go to I’ll go with you.’ Well, he called my bluff, and he called me and said, ‘Hey, we’re going to JSU.’ I told him I was already going to Alabama and I had a scholarship and he said, ‘That’s great, but you made me a promise.’”

AJ followed through on his promise, and as he stood by his brother’s gravestone, he acknowledged how following through with that promise changed his life forever.

“It made me into the man I am today,” said AJ. “I would say 98 percent of it was Matt and the other 2 percent was me actually going forward and doing it. Matt would say it was the exact opposite because he was extremely humble. He was always the person behind the curtain making sure people were being taken care of and things were getting done.”

Matthew would have been 40 years old last month, and AJ said in the nine years since his brother has been gone, he has still in a way never left his side.

“I could talk for hours and hours about the great things Matt did in his very short life on this Earth, but the biggest thing that kept coming back to me was I was comparing myself to him,” he said. “Last night I sat down with myself and I began to cry after praying about it, and I realized even after nine years I was comparing myself to him and I realized I need to set my own standards, because that’s what Matt would have pushed me to do my whole life.”

Honoring veterans like Matthew will continue to be the forefront of the Matthew Blount Post, whether through the motorcycle ride or other events.

“We’ll continue doing it,” said Monday. “It just fits. It fits what Matt stood for and what this post stands for to continue…Our work [as veterans] will never end.”