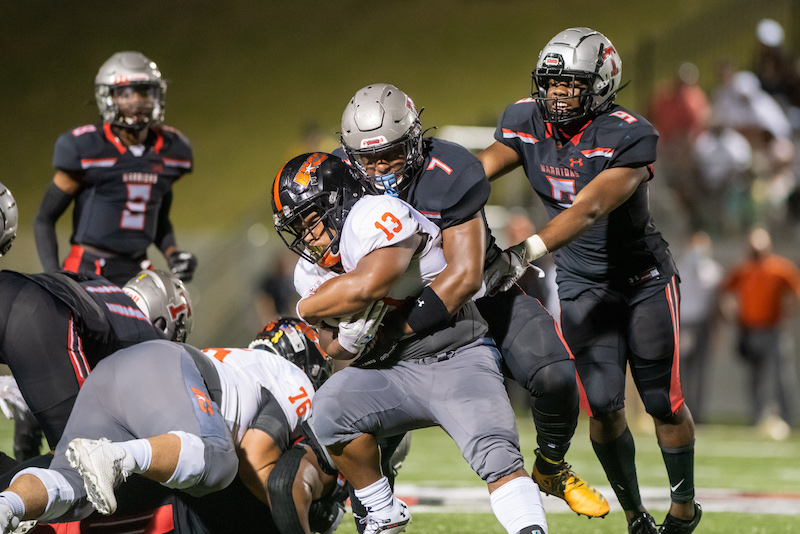 The Thompson Warriors will play host to No. 2 Hoover this Friday night in the biggest game of the season so far. (File)

It may not be the Game of the Century, but as far as high school football goes, it’s pretty darn close.

That’s what you can expect when the No. 1 Thompson Warriors play host to No. 2 Hoover this Friday night for the Class 7A, Region 3 Championship.

The two teams have been on a collision course with one another for the majority of the season, and now, they’re primed for the biggest game of the season.

The Bucs have now outscored opponents by a combined score of 349-108.

It’s crazy to see those numbers and think a team is at a disadvantage, but Thompson has outscored opponents by a combined score of 448-26.

However, led by quarterback Bennett Meredith, who gave Thompson one of its toughest challenges a year ago while at Spain Park, Hoover will present the toughest test for the Warriors so far this season.

The No. 2 Bucs will have the most talent at every position that Thompson has faced, and a talented quarterback can make all the difference in trying to find just the slightest opening against Thompson’s ironclad defense.

If Meredith can come out and find some early openings to help the Bucs take an early lead, that is their best hope. He’ll have to find his top targets, Cotton Peters and K.J. Law early and often, but Hoover will also need LaMarion McCammon and Ahmari Williams to step up in a big way.

With a Division I player at just about every spot in the secondary and several in the front seven as well, having multiple options will be key for the Bucs in hopes of keeping Thompson’s defense guessing.

And that’s where the problem lies for most opponents.

Thompson’s front seven features two national top-10 recruits in Jeremiah Alexander and Peter Woods, who have already totaled more than 100 tackles with a combined 40 tackles for loss this season, while the linebacking unit includes leaders such as Jax Van Zandt and Seth Hampton, who have more than 20 tackles for loss and 80 tackles between the two of them.

Throw in others like Nate Riddle to that front seven, and establishing a run game proves challenging.

That leaves a tough challenge for Williams at the running back position for the Bucs, but more importantly, it allows Thompson’s secondary to know passes are likely.

Led by Tony Mitchell, it’s a secondary featuring top talent that can not only break up passes, but make big hits in the middle of the field to cause issues.

Also featuring TreQuon and AnQuon Fegans, the unit has combined for eight interceptions this year and knows Meredith provides the toughest challenge so far.

But with a lockdown player at every position, expect it to be difficult for Hoover to establish a consistent passing game.

What that does is make it hard to keep up with Thompson’s dynamic offense.

The Warriors are led by Connerr Harrell on that side of the ball. The reigning Gatorade Player of the Year and Class 7A Back of the Year has thrown for more than 2,000 yards this year at the quarterback position with just three interceptions and 32 touchdowns.

He’s also run for close to 300 yards, but what makes him most dangerous are the weapons around him.

Harrell has four running backs that have run for 230 yards or more this season, led by Brandon Franklin with 439, while Justin Pegues has run for 192 yards.

That makes every defense have to respect the ability of the ground game no matter who is in the backfield, while the passing game is arguably the most dangerous aspect.

Not only can Harrell buy time in the backfield as an elusive quarterback, but he has three trustworthy receivers with more than 390 yards this season.

Ryan Peppins leads the way with 920 yards and 17 touchdowns, while Jaylen Ward has totaled 470 yards and eight touchdowns. Pegues has also been big in the passing game with 450 receiving yards.

All three guys have elite speed and can make plays both downfield or after the catch. Spread across the field, that provides a tough test for any defense.

That balance across both sides of the ball gives the Warriors too much of an advantage, and while Hoover will provide a difficult test, Thompson should be able to create some separation late in this one. How close will it be? That’s the question.

Last week, after the Oak Mountain win, I was asked to “not disrespect” the Warriors anymore in friendly banter after the game like I did by predicting Oak Mountain to score 14 points. Mind you, the Eagles were inside the 5-yard line twice and should have scored two touchdowns; but this week, I’ll trust in them since they asked me to.

This defense amazes me each time I see them, and there isn’t a better one in the country in my opinion. So now, it’s time to prove it against the toughest opponent, who won’t make mistakes if they get opportunities. That means special teams has to be sound as well, because you want to win the field position battle, especially early.

As talented as Meredith and the Hoover offense can be, I don’t see much of a running game emerging, and the defensive line of Thompson won’t give the passing game much time to develop.

With this prediction, however, will come a hungry Hoover team with a talented quarterback, so it’s time to back up the talk for the Warriors and prove just who they are in a top-two battle.