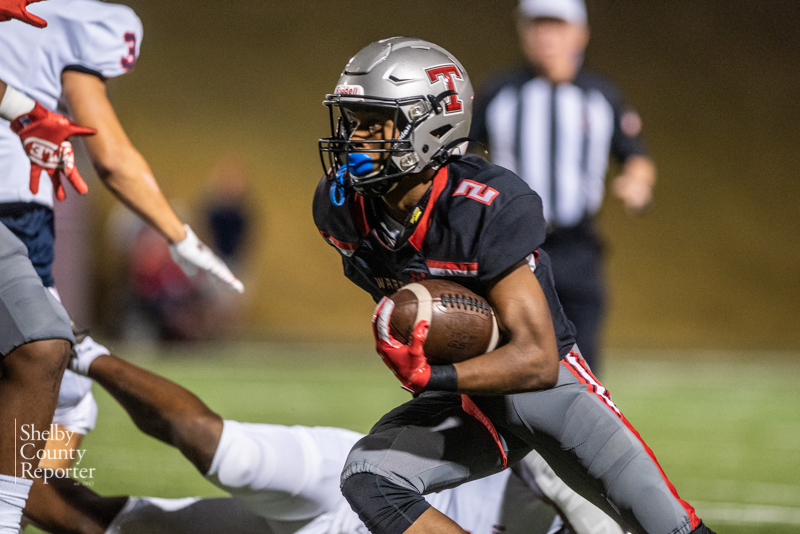 Thompson’s Ryan Peppins is one of three players from the Warriors to earn a spot in the North-South All-Star football game. (File)

There will be plenty of representation from Shelby County when the North All-Star football team takes the field for the North-South All-Star game on Friday, Dec. 17 in Mobile.

Three players from Thompson, one from Spain Park and Helena head coach Richie Busby will all be a part of the special game for the 37-member North All-Star squad.

Thompson tied with Bob Jones and Pleasant Grove for the most players named to the team.

Peppeins is one of the state’s top receivers this year, and the announcement came the week after he put up 222 yards and five touchdowns against Oak Mountain.

As of Wednesday, Oct. 20, Peppins had totaled 920 receiving yards and 17 touchdowns on the season to lead the Warriors, who have three receivers with more than 480 yards.

On the defensive side, Van Zandt has put up jaw-dropping numbers of his own.

The senior linebacker has totaled more than 50 tackles with 11 tackles for loss, which is fourth on the team behind national recruits Jeremiah Alexander and Peter Woods as well as fellow linebacker Seth Hampton.

He also has one forced fumble on the season for a Thompson defense giving up less than three points per game with five shutouts.

Hall is one of many on the Thompson offensive front that has been big for the Warriors as well. He sits near the team lead in pancake blocks.

Braxton Sumpter will represent the Spain Park Jaguars on the North team thanks to a remarkable season kicking the ball.

All four of those players will be battling under the leadership of Helena head coach Richie Busby, who will lead the North team.

Now in his fourth season leading the Huskies, Busby has posted an overall record of 29-13. Most impressively, however, is what he has done the last three years.

The Huskies finished 9-2 two years ago, 7-5 last year, with two forfeits due to COVID-19, and are currently 9-0 this season with one game left to play.