‘A simple way to read the word of God’ 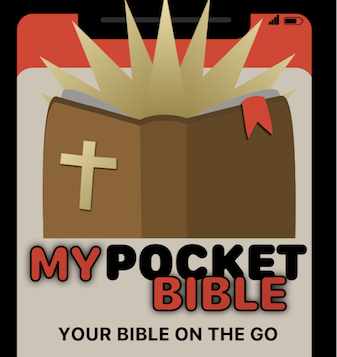 The Bible app “My Pocket Bible” is the creation of Helena resident Tracy McNeil, who is the owner and operator of digital content developer company Arctyx. (Contributed)

HELENA – Churchgoers looking for a more remote way to enjoy their time of worship have found a steady companion in the My Pocket Bible app. The app, which provides access to passages from the King James version of the Bible, has Helena roots.

The app’s creator, Tracy McNeil, is the owner of the digital creation company Arctyx. McNeil moved to Helena in 2018, and began Arctyx in June 2020 after he found himself laid off from work during the COVID-19 pandemic.

“[Arctyx]  got its roots in game development,” McNeil said. “That’s where I was really hoping to go with it, but I was really stuck in a rut with game development, and it was leaving me not wanting to successfully complete a project. It was draining to my inner creative because it was leaving me with all of these unfinished products. I was thinking in my head of things I could do to add to my portfolio that I enjoyed creating and I could do it for myself.”

His prayers, so to speak, were answered when a small local church reached out to him on his website about creating a Bible app during the peak of the COVID-19 Delta Variant wave.

“Even before the pandemic, the church was seeing dwindling attendance numbers,” McNeil said. “It was just a small mom and pop church, and they just wanted a simple way to remotely engage with their congregations.”

Large scale app development companies were quoting the church massive amounts of money to make their app. McNeil thought that was ridiculous and decided to help.

“We kind of fell into each other’s laps when we both needed each other.”

McNeil offered to create the app for free as long as he was allowed to maintain his intellectual property and use noninvasive ads. He said the combination of parties led to a perfect balance: McNeil was able to scratch his creativity itch while growing his portfolio, and the church received an innovative way to engage their congregation without being taken advantage of.

“It was a new type of project for me,” McNeil said. “I would be learning as much as they would be gaining, so I really didn’t see a point in charging for that.”

“The hardest part about creating this app was honestly not even the creation part of it,” McNeil said. “It was setting up the copyrights of the Bible. I had it coded in two weeks, but just getting the copyright permissions for using the Bible for public domain, that was the hardest part.”

To get copyright permission for the King James version of the Bible, McNeil had to repeatedly contact the University of Cambridge. McNeil was persistent, and ultimately it paid off.

He ended up creating two apps: one with the church’s specific branding published under their names, and the second was what McNeil referred to as a “more generic” copy that essentially became My Pocket Bible. The church was more than pleased with their product. They still keep in touch with McNeil, and give him feedback from the users in their congregation.

“The whole point of the app was to be something completely simplified,” McNeil said. “Something all people could access, easy for elderly people, you wouldn’t need to buy like a subscription. It was literally just an app to read the Bible.”

While other Bible apps may offer a more elaborate experience, McNeil said he didn’t want his app to have too many bells and whistles.

“It’s just a simple app to read the word of God,” he said.

Since the launch of the app, McNeil’s company, Arctyx, has expanded its portfolio, and the My Pocket Bible app has gained in popularity. As of right now, the app is only compatible with Android phones, but McNeil said he is currently working through the red tape of adapting the software to IOS for IPhones.

Arctyx (an anagram of Tracy) functioned as a software development company initially, but in the almost two years it’s been launched, McNeil said Arctyx has done anything digital you could imagine. He’s also an avid supporter of groups that advocate for gaming for everyone, including people with disabilities, older age groups out of the typical “gamer” age bracket and women in gaming.

Visit your Android app store to download the My Pocket Bible app.