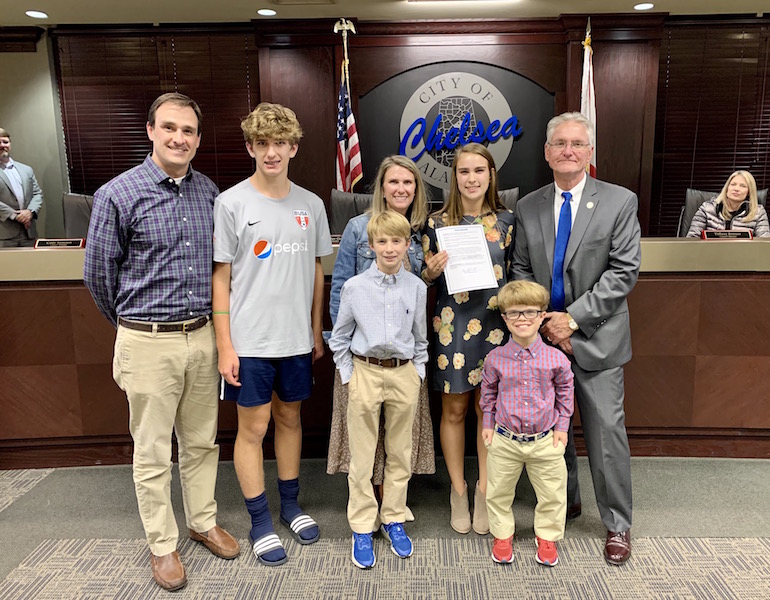 CHELSEA – A local student spoke to the Chelsea City Council about the importance of a proclamation related to dwarfism awareness on the council’s agenda on Tuesday, Oct. 19.

Chelsea High School junior Kate Peterson said her younger brother Russell has a form of dwarfism known as achondroplasia, a genetic disorder that results in an average size torso but shorter arms and legs.

“It is the most common type of dwarfism, and it affects many people around the world,” Peterson said. “As SGA president, I have been gifted with a platform to bring awareness to a campaign very dear to my heart.”

“The national nonprofit organization Little People of America, or LPA, provides support and information to people of short stature and their families,” she said. “LPA annually recognizes October as Dwarfism Awareness Month, and people around the country show their support for dwarfism awareness by wearing green.”

Peterson said her family and friends have participated in “Wear Green Day” over the past few years, and local schools have become involved, too.

“What began among a small support group has expanded,” she said. “In fact, last year both Chelsea Park Elementary School and Mt Laurel Elementary School got involved and even made it a friendly competition. This year, I’m excited to say that all the Chelsea schools are going to wear green this Thursday in support of Dwarfism Awareness Month.”

The goal of Wear Green Day is “to spread public knowledge and positive awareness about people with dwarfism and the fact that it is not a disease, and it is not something that needs to be cured, but that simply those with dwarfism are the same as you, only a different stature,” Peterson said.

As the most common form of dwarfism, achondroplasia affects one in every 40,000 births.

Peterson said her family’s hope is for Wear Green Day to become an annual event.

“In Chelsea, I hear the phrase ‘It’s all about family’ often,” she said. “In my family, dwarfism awareness is an important undertaking.”

After the council approved the proclamation, Mayor Tony Picklesimer said the lights on City Hall will be green for the remainder of October in recognition of Dwarfism Awareness Month.

“We’re proud of you,” he said to Peterson. “Thank you very much for bringing this to our attention.”

• Approved declaring a washing machine as surplus property and authorize its disposal.

• Approved for Nick Grant funds totaling $8,725 to be awarded to Chelsea High School for a new volleyball net system.