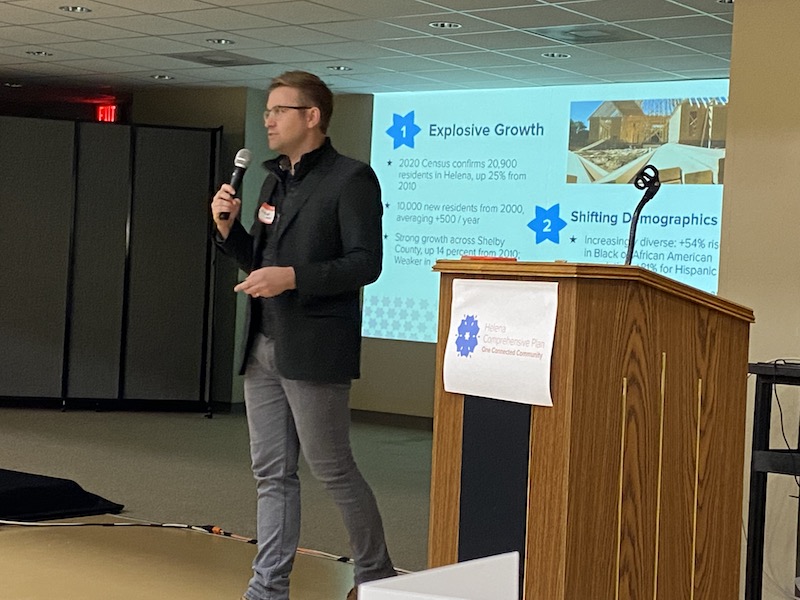 Helena city leaders held a community-driven meeting asking residents of Helena to help them in building a comprehensive plan for the city’s future. Pictured is Kyle May, the project manager for MKSK, an architectural and urban design firm. (Reporter Photo/Michelle Love)

HELENA –  On Wednesday, Oct. 20, Helena’s city leaders held a “Community Kick-off” event asking residents of Helena to voice their hopes and concerns in the hopes of building a comprehensive plan for the city’s future.

The meeting, which was held at the Helena Sports Complex, held an impressive turnout with various members of Helena’s residents, business owners and City Councilmembers  present. Alabama Representatives Kenneth Paschal and Arnold Mooney were also present.

Helena Mayor Brian Puckett thanked everyone for coming to the meeting, and expressed excitement at the potential for the evening.

“We need to put a plan in place,” Puckett said. “Not just put it in place, but actually follow through with it moving forward.”

Puckett handed the floor over to Chris Hermann of MKSK, an architectural and urban design firm dedicated to helping build comprehensive plans for cities like Helena. Hermann said this was a major moment for Helena, noting the considerable growth and progression of the city.

“It is really important for a community, particularly one that’s growing like Helena, to every 10 years ask, ‘Where have we been? Where are we going? What do we want to do?’ That’s really what this conversation is about,” said Hermann.

Hermann continued that as Helena continues to grow, it’s important now more than ever to stay connected.

“There’s a lot of interest in new things and services of things you’d like to see, and that’s great,” he said. “We want to communicate with you and work with you on how to make that happen.”

Herman asked the attendees to think about what priorities they would want to bring to the forefront in the evening’s conversation.

Moving on in the evening, MKSK’s Project Manager Kyle May asked everyone present to participate in a series of questionnaires about what everyone thinks is special about Helena, what the demographics of the city are and how all of those things can play into the growth and development of future projects.

Plan topics presented included land use, economics, infrastructure, parks and trails and local facilities that are useful to the community.

In a group discussion, participants were asked to talk with each other about what they were both optimistic for and concerned for looking into the next 20 years of Helena. Popular answers for optimisms were the safe community, productive city government and the school systems. The most popular concerns were property taxes and the quality of Helena’s roads and traffic.

The growth of the city, however, was both labeled as a concern and an optimism. Many of Helena’s residents were excited for growth, but were concerned that the city was growing “too fast” or “not growing smart.”

May concluded the evening by explaining MKSK would be working with all of the responses given that evening by consolidating them into a coherent comprehensive plan that can be used by city leaders in the coming years. Puckett emphasized that the all of Helena’s city leaders are dedicated to representing all members of the community, and want their voices to feel heard.