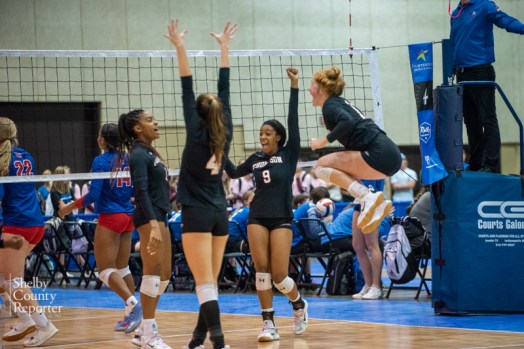 Thompson volleyball players celebrate during their win against Vestavia Hills, which cemented their spot in the state tournament. (Reporter photo/Keith McCoy) 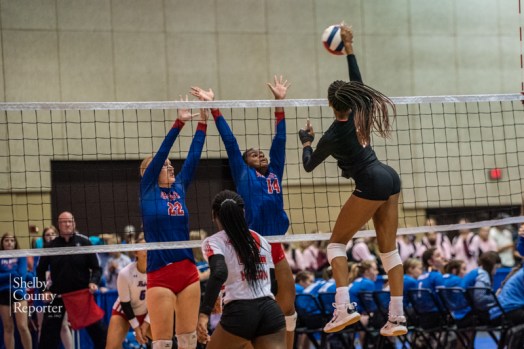 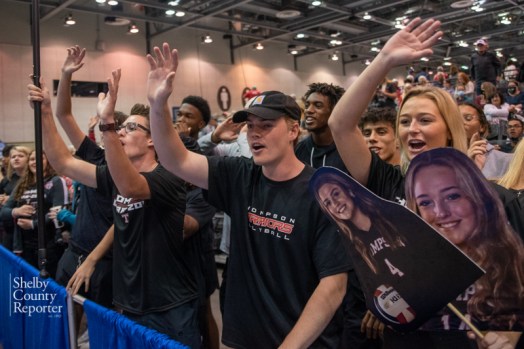 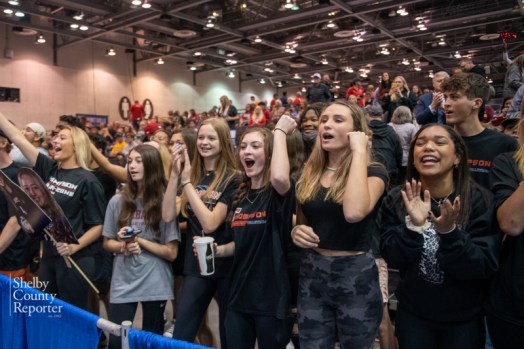 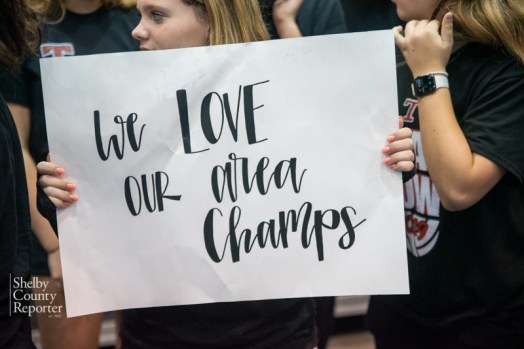 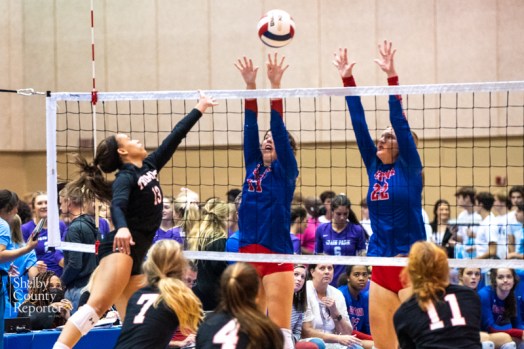 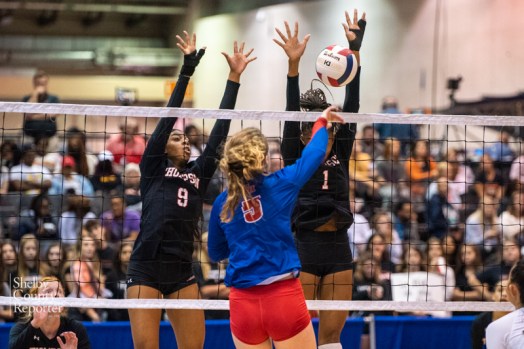 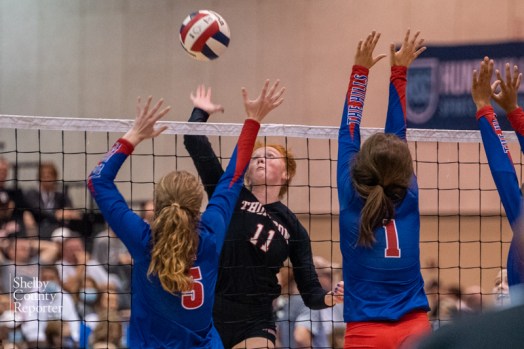 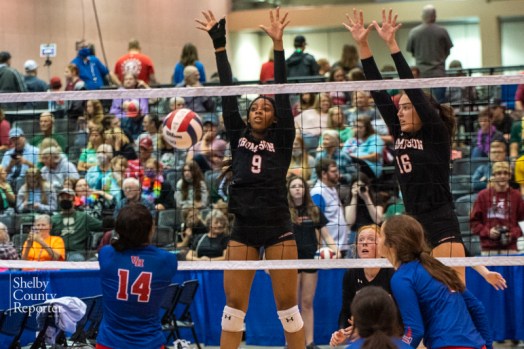 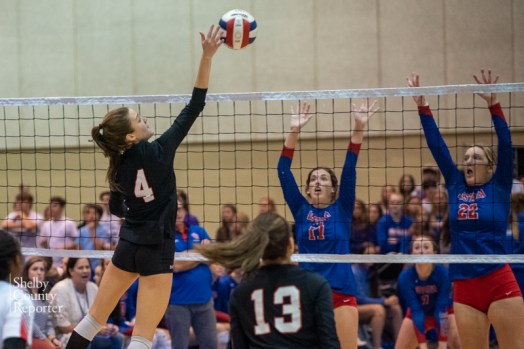 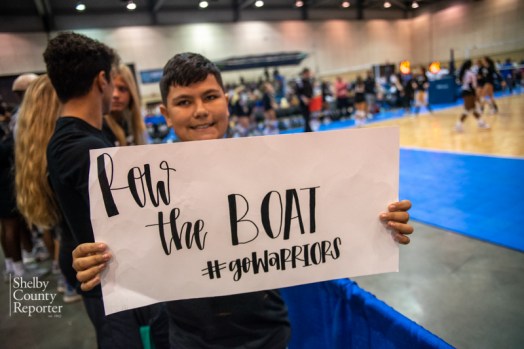 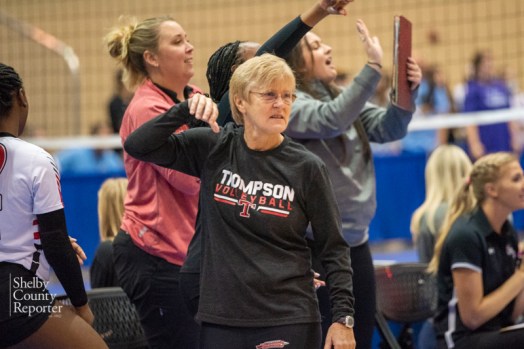 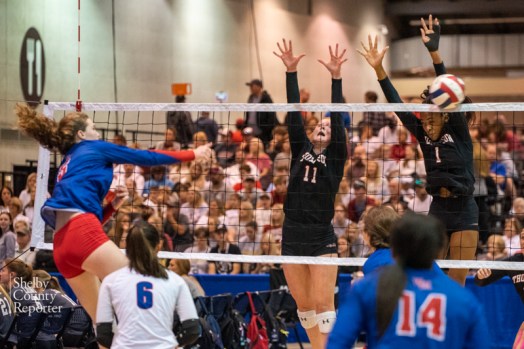 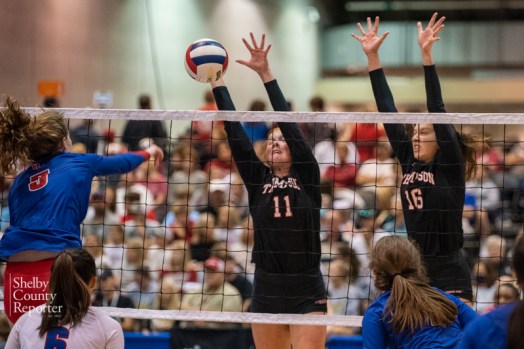 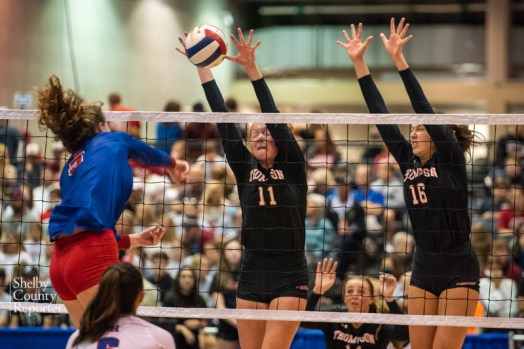 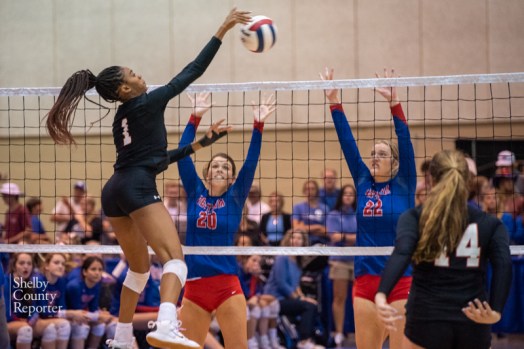 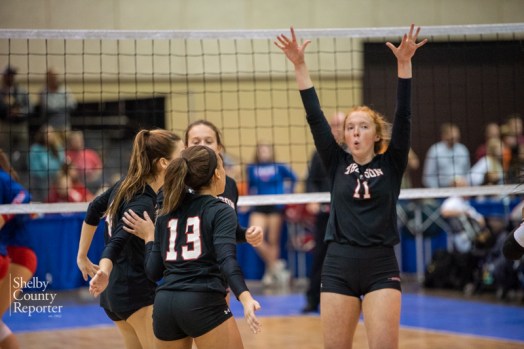 HUNTSVILLE – Advancing to the Final Four last year, the Thompson Warriors could almost taste a state championship. But after falling to eventual state champion Hoover in the semis, the Warriors instead entered the 2021 season with a bitter taste.

Determined to turn that bitter ending from a year ago into history this year, the Warriors did just that with a straight-set victory against Hoover to claim the area tournament title on Oct. 14, and now, they’ll have their chance to chase down the championship that narrowly evaded them last year.

Taking on Vestavia Hills on Thursday, Oct. 21, in the North Regional tournament, Thompson overcame a 1-0 deficit with its season on the line and proceeded to reel off three consecutive sets in a row to down the Rebels 3-1 and punch their ticket back to the state tournament.

The win makes them one of the final eight teams standing in Class 7A, and puts the Warriors just two wins from competing in the state championship.

The victory didn’t come without challenges, but the Warriors refocused on their goals and coasted after falling into a 1-0 hole against the Rebels.

In the opening set, Thompson fell behind fast and never could recover.

Vestavia Hills jumped out to a 15-9 lead and extended the advantage to seven points shortly after at 17-10.

The Rebels went on to pick up a 25-15 victory in the opening set to take control early with a 1-0 advantage in the match.

At that point, it seemed as if the Warriors were struggling to find any confidence, but they remained calm and knew they could bounce back.

That composure, which was built up through one of the state’s most difficult regular-season schedules, paid off.

From there, Thompson didn’t just look like a better team, the Warriors looked like the team that was ranked No. 1 midway through the season and had just beaten defending state champion Hoover in the area tournament championship.

Thompson took a tight battle early in the second set and started to create some separation with a 16-11 advantage.

Vestavia gave one last push to cut the deficit to two points on the back of a 3-0 run, but the Warriors finished off the set with a 9-3 stretch from there to pick up a 25-17 set victory.

That not only prevented Thompson from falling into a 2-0 deficit, but it gave the Warriors breathing room. Instead of needing to win three consecutive sets without dropping one, it was now a best-of-three match.

Not only that, but the Warriors had all of the momentum now.

That showed in the third set as they jumped out to another early two-point lead before extending it to 16-10.

This time, the Rebels didn’t have a push and Thompson made quick work of the set en route to a 25-13 victory that put the Warriors in front 2-1.

With their vision firmly on a trip back to the state tournament, that 2-1 lead was all the confidence they needed.

The fourth set was a tight battle up to a 12-12 tie, but Thompson kicked into a new gear knowing a fifth-set tiebreaker was something to avoid.

The Warriors went on a 6-2 run to create all of the separation they needed.

Vestavia fought back to within two points at 19-17 and three points at 22-19, but the Warriors earned match point at 24-20 and closed the match out two points later with a 25-21 victory.

With the win, Thompson will head to the state tournament on Wednesday, Oct. 27.