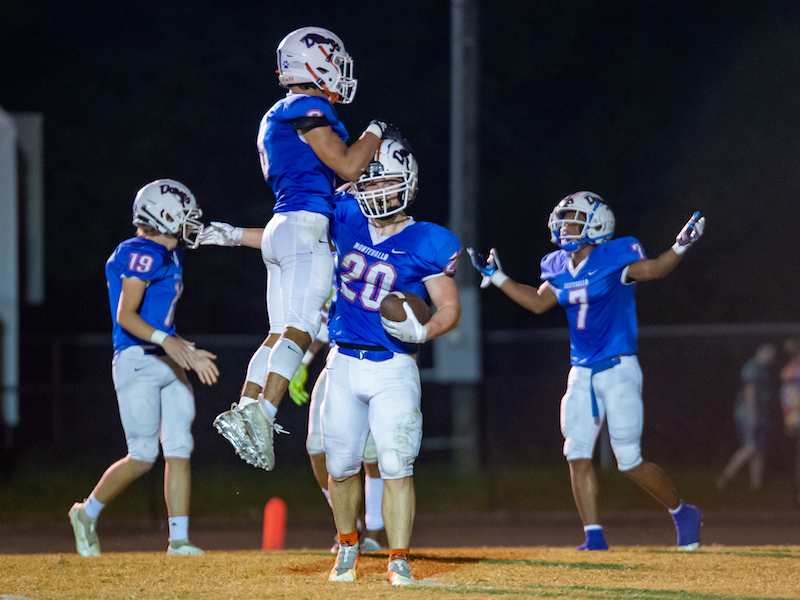 PLANTERSVILLE – Montevallo secured a playoff berth with a 49-14 win over Dallas County on Friday, Oct. 22.

The Bulldogs built a 35-0 lead by halftime.

Joseph Anderson got the scoring started with a 3-yard run, and then Kial Cottingham found Kam Goins for a 22-yard touchdown with 2:54 remaining in the first quarter.

Anderson added his second touchdown run, this one from 2 yards out, seconds into the second quarter.

Then it was Cottingham’s turn again, this time connecting with Tamardreon Purnell from 16 yards out.

Cottingham added a 20-yard touchdown run with 2:57 to go in the first half to make it 35-0 after the extra point by Gio Hernandez, who was good on all seven of his kicks.

A 65-yard run got Dallas County on the board shortly into the third quarter, but Montevallo answered with a 7-yard touchdown run by Anderson.

Dallas County scored again early in the fourth quarter, and MHS concluded the scoring on a 1-yard run by Anthony Martin.

“I’m unbelievably proud of our seniors,” MHS Coach Blake Boren said. “We talked all week about cementing a legacy, and I thought we played inspired football tonight with a playoff berth on the line.

“In the history of Montevallo football, there have been two senior classes to make the playoffs all four years. Tonight, our seniors became the third group to accomplish this. This group is also one of nine in school history to win a playoff game.

“I’m just very happy to have been a part of this group’s accomplishments. I hope we have a lot of football left together this season. We’re starting to play well. I am excited to see them play in the postseason.”

Anderson was the workhorse for the Bulldogs, rushing 21 times for 222 yards.
Cottingham added four rushes for 50 yards, and completed seven passes in nine attempts for 104 yards.

Jaydien Rutledge led the team with 36 receiving yards, and Purnell, Goins and Javon Rogers each had two catches.

Charlie Adams led the defense with 10 tackles and also caused a fumble, while Cole Dennis had nine tackles and Dylan Campbell had seven.