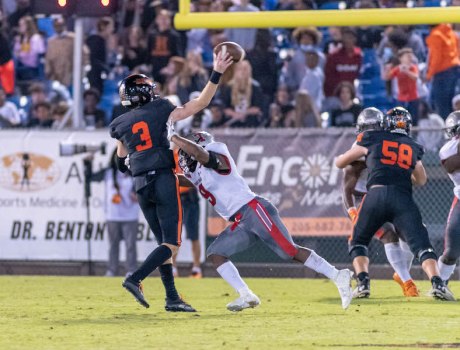 Hoover quarterback Bennett Meredith steps into a throw despite the pass rush. He had three touchdowns, including the game-winner with 13 seconds left, to lead the Bucs past Thompson in a top-two battle for the region title. (For the Reporter/Neal Wagner) 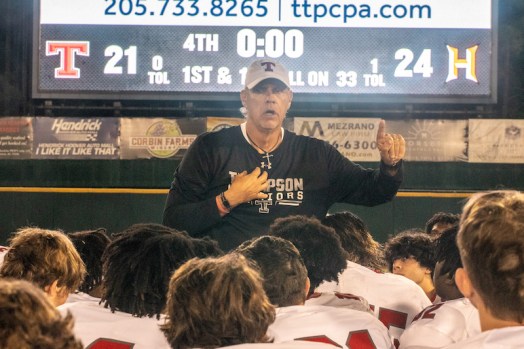 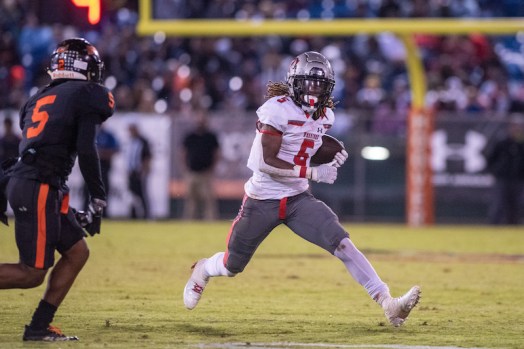 But as head coach Mark Freeman said after the difficult loss to the No. 2 Bucs, the Warriors weren’t playing for an undefeated season.

“Personally, you don’t talk about going undefeated. You talk about being a state champion, and so this is just a test for us to go get better, find out who we are, go get better, and our guys will,” Freeman said after the team’s first loss in the last 28 games. “We’ve got great guys, great coaches, great players, and we’ll bounce back. We’ll get them refocused.”

It was a difficult second half for the Thompson offense, which appeared unstoppable in the second quarter behind 21 points to take a 21-10 lead into the half.

But an injured Conner Harrell didn’t return to the quarterback position in the second half, and the offense didn’t have the same consistency from there.

A few dropped passes, a Hoover defense keyed on the run and ultimately a missed field goal from 30 yards made the difference in the three-point loss.

The Warriors also faced adversity in the first half of the game, falling behind for the first time this season at 3-0 through the first quarter of play on a 25-yard field goal.

Thompson, however, responded on a 22-yard touchdown run from Justin Pegues to put the Warriors in front 7-3.

Hoover did come back with a big answer when Meredith hit Jabari Gaines from 18 yards out one play after a big third down and long conversion that saw him step into a pass while Peter Woods was tackling him.

With the score, the Bucs regained a 10-7 advantage midway through the second quarter.

But from there, it was all Thompson the rest of the half.

The Warriors answered with a 32-yard touchdown pass from Harrell to Ahmari Bolden to take the lead back at 14-10 with 3:51 to play in the half.

Then, after the defense got a stop, the Warriors scored in two plays when Harrell hit Jaylen Ward for a 71-yard touchdown.

That, however, was the final pass Harrell threw.

It looked as if Hoover was going to draw within four points after earning third-and-goal from the 1-yard line in the final 30 seconds of the half, but Thompson’s defense got a massive goal line stand that sent the players and fans into a frenzy going into the locker room.

In the second half, Thompson’s defense played well enough to give the Warriors chances to win, but they were on the field a lot with the offense struggling to carry the momentum into the half with Harrell out.

Two dropped passes on the first two drives from the Warriors in the half prevented likely touchdowns, and Hoover eventually capitalized.

The Bucs scored with 1:33 left in the third quarter on a 25-yard touchdown pass from Meredith to RJ Hamilton to cut the deficit to 21-17.

It looked as if Thompson’s daunting defense may be able to hold that lead, but the Bucs got one last chance with 2:38 to play from their own 19.

Thompson went to work, converting a third-and-10 with an 11-yard pass early in the drive, and then quickly earning first-and-goal.

One play later, Meredith rolled to his right and found Gaines for a perfect 8-yard touchdown pass with 14 seconds left that became the game-winner.

“That’s a good football program over there, and there is nothing to hang our heads about,” Freeman said. “We’ll be ready to bounce back.”

Meredith finished 23-of-40 for 292 yards and three touchdowns, while Hamilton had 152 yards on 10 receptions.

Woods had a strong night for Thompson’s defense with 8.5 tackles, including three for a loss.

“It’s football and you’ve got to fight through adversity, and it was a good football game,” Freeman said. “Nobody wins them all. Are we upset? Yeah, but the real season is fixing to start in two weeks for us, and we have to get them back and get them ready to go.”