Calera picks up 6th win of season behind dominant 2nd half 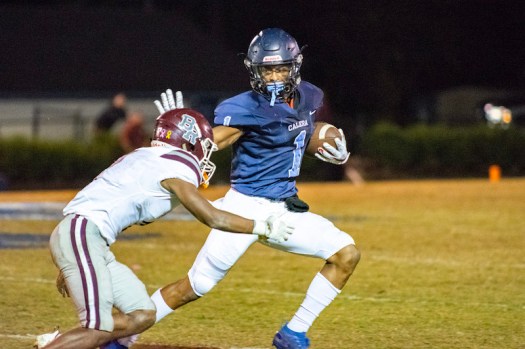 Calera's Kobe Prentice stiff arms a defender. He finished with 101 yards and a touchdown in the Eagles' win against Benjamin Russell. (For the Reporter/Markee Canada) 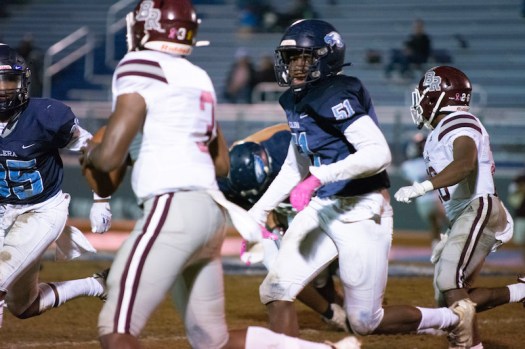 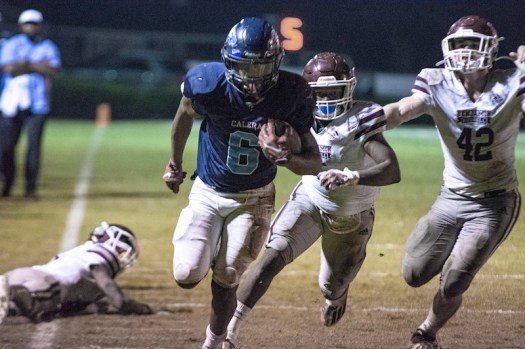 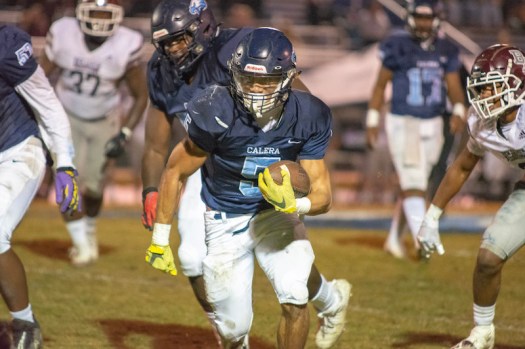 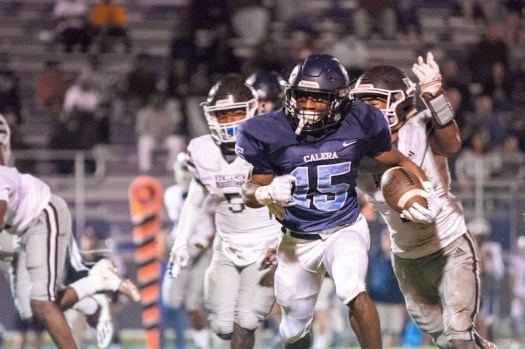 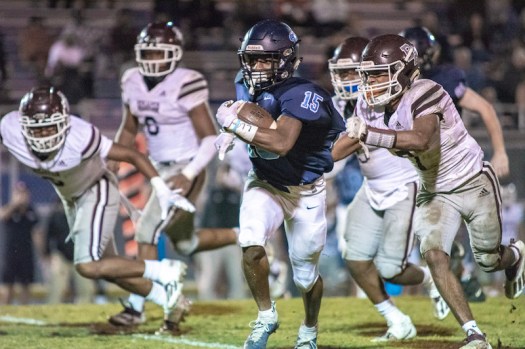 Calera will host Chelsea this Thursday night in our Game of the Week. (For the Reporter/Markee Canada) 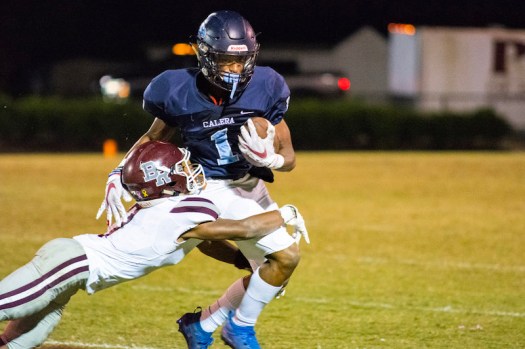 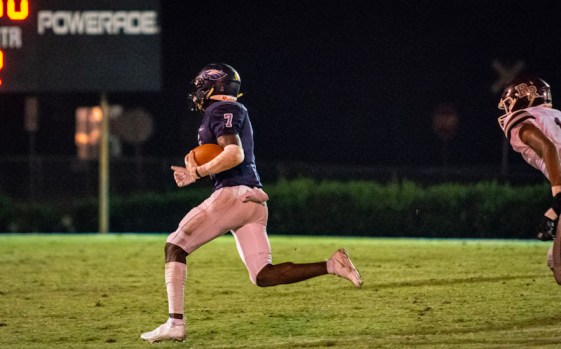 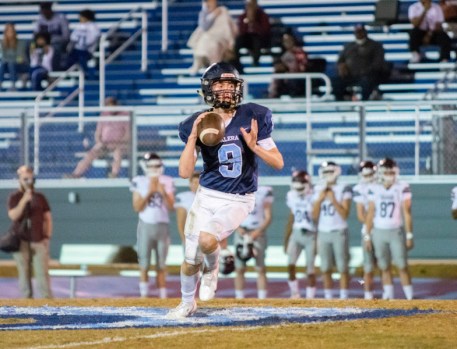 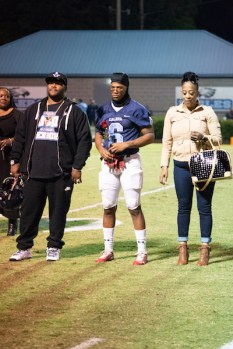 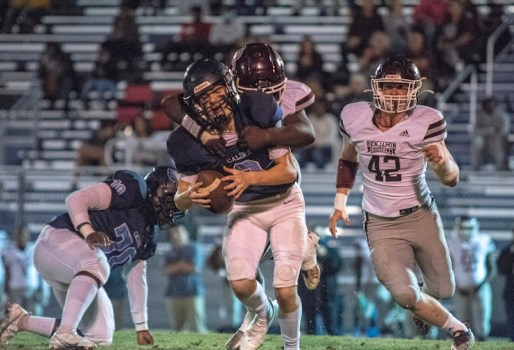 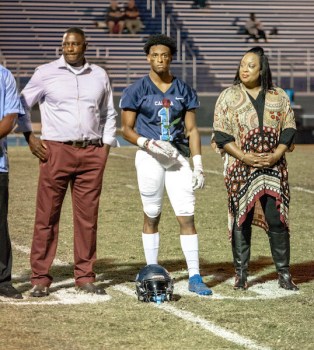 CALERA – The final score may say otherwise, but the Calera Eagles fought through a tough matchup on Friday night, Oct. 22, coming back from being down at halftime to blow past the Benjamin Russell Wildcats 41-17.

“I mean, I think second half, we battled back,” Calera coach Jason Hamlin said postgame. “We faced a lot of adversity in the first half, having our quarterback go down and we got a few guys still banged up from the Wetumpka game. I thought that was just a full team victory, everybody did their job and kind of come together in the second half to punch a big W in.”

The Wildcats started the game with a long drive that led to a field goal and an early 3-0 lead. After trading punts, Calera made the most of a short punt to let running back Daniel Carmona set the Eagles up in the red zone and follow it up with a scoring run.

From there, two fumbles ensued on the next three plays. Benjamin Russell committed the first blunder on the first play of its next drive thanks to a bad snap. Calera then had a 33-yard completion to Matthew Windham wasted on the next play on a fumble that the Wildcats recovered

Calera’s next offensive play was also fumble after a snap went back 30 yards and had a Wildcat defender fall on it.

Benjamin Russell finally got into the end zone on the back of Jykeveion Hicks for a 4-yard rushing touchdown and a 10-7 lead.

The Wildcats only had the lead for mere seconds before Calera stole it back off a Jaylen Mitchell kickoff return touchdown for a 14-10 lead.

After forcing a punt, Calera faced disaster once more in the first half as cornerback Ty’quan Williams jumped a pass intended for an Eagles’ receiver and strode into the end zone from 10 yards out on Calera’s first play of the drive. Benjamin Russell would take that 17-14 lead into halftime, and coach Hamlin looked to clean up an offense that gave up three first half turnovers during the break.

“At halftime, we just talked about calming down and playing our game,” Hamlin said after the game. “Like, they were stressed, they were nervous a little bit rather than just playing our game. We were kind of feeding into what Ben Russell was doing, and they had a great game plan and they came out and played hard, but we just talked to our guys about calming down, and don’t try to be the hero, just DYJ, do your job, and everything else will take care of itself.”

The second half proved to be a completely different story, as the Eagles defense shut out the Wildcats and rode their offense throughout to seal the game.

Running back Chris Cotton ran the middle on the first drive of the half for a score that put the Eagles up 17-14—a lead Calera didn’t relinquish.

The next play, senior Gabe Fails recovered a fumble on a Benjamin Russell kickoff return. Although the Eagles were unable to score that drive, the next one found Kobe Prentice deep for a 70-yard score.

Cotton scored again after a late punt set the Eagles up inside the 5-yard line, and a two-point conversion from Prentice in the corner of the end zone put Calera up three scores, 34-17.

A pass breakup from the Calera defense on fourth down of the next Benjamin Russell drive sealed the deal, and a late Cotton touchdown created the final score.

After the game, Hamlin was confident in assessing his team’s near future, as the Eagles still have a non-region clash at Chelsea next Friday standing between them and playoffs.

“Hopefully, if we come together as a team, the only person that can really beat us is us,” Hamlin said. “Now, we’re going to face a tough challenge, obviously Chelsea’s a good football team, but they’ve come up hot past few weeks. We’re going to have our hands full; it’s going to take a total team effort because I don’t know who we’re going to have on the sideline and who’s actually going to help us play.”

Calera is now 6-3 overall this season and finished region play 4-2.