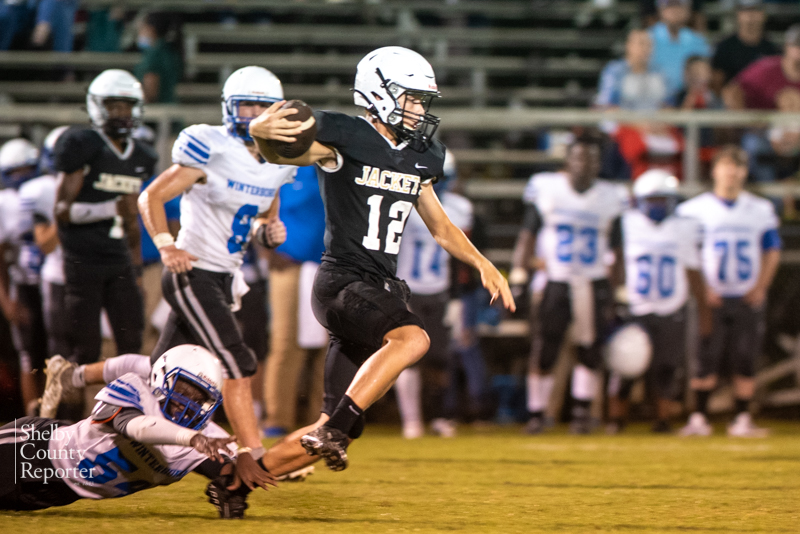 VINCENT – Needing a win or a Fayetteville loss to Ranburne on Friday, Oct. 22, to earn a spot in the playoffs, the Vincent Yellow Jackets didn’t see either happen.

The Jackets took an early lead and played tight with LaFayette early in the game, but the Bulldogs eventually became too much, pulling away for a 54-23 victory.

With that, Vincent needed Fayetteville to upset Ranburne, but Ranburne won that one 43-29 to keep the Jackets out of the postseason despite one of their most successful seasons in recent years.

“It’s disappointing because I thought we had opportunities to get to the playoffs this year, but we made a lot of strides this year. If we can win next week it will bring us up to 6-4 which hasn’t happened here in a long time. We’re starting to see it in our kids now. There were some upset kids tonight because they wanted it really bad. With all of the adversity we’ve had hit us in the last week we could have easily rolled over and died. I’m proud of our guys and hope we can finish out strong next week and work toward next season. It’s going to be a fun time coming,” said Lucas Weatherford, Vincent head coach.

That was the start of a back-and-forth battle for the first two quarters.

LaFayette came right back late in the opening quarter with another touchdown to regain the lead at 12-8.

But Vincent then responded to that score with one of its own. The Jackets took the lead at 15-12 and had a chance to carry that advantage into the locker room.

Before the half could end, however, LaFayette punched in one last touchdown to regain the lead by five going into the break.

Needing a big start to the third quarter to prove they could answer right back, the Yellow Jackets got the opposite.

They gave up 22 unanswered in the third quarter alone to create all the separation necessary at 42-15.

Vincent was able to find the end zone one more time before the game ended, but so did LaFayette, creating the 54-23 final.

The Jackets fell to 5-4 on the season with the loss and will close out 2021 season with a road trip to Prattville Christian on Oct. 29.

Weatherford shifted Tray Youngblood to the backfield. He carried the ball six times for 164 yards and a touchdown, while quarterback Blake Allums had 198 yards on 9-of-14 passing and 34 yards on the ground.

Zac Carlisle had 138 yards receiving, including a pair of long receptions that ended in the end zone but were called back.