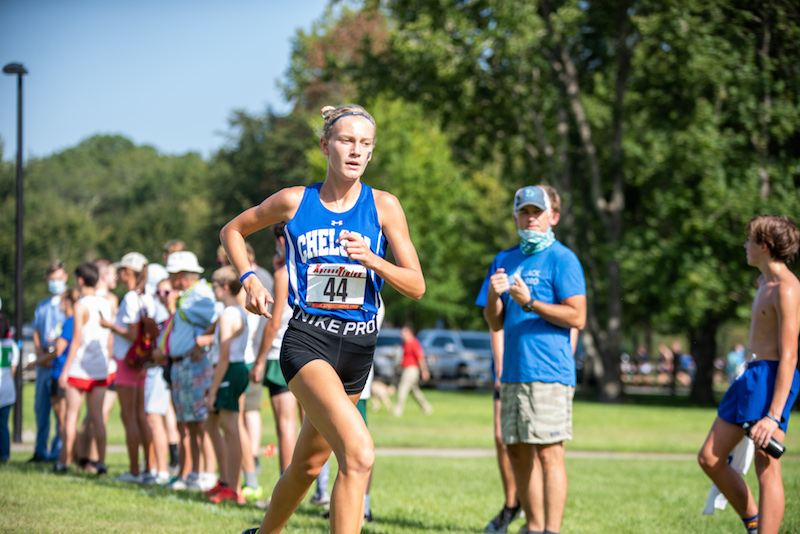 SCOTTSBORO – It was business as usual on Thursday, Oct. 21 for Chelsea’s Miles Brush and Cady McPhail at the Last Chance Invitational at Scottsboro’s John R Esslinger Trail of Champions.

The two runners, who are contenders for the Class 6A Cross Country State Championship this season, swept the race finishing first in the boys and girls race, respectively.

For Brush, it marked his fourth consecutive victory on the season. Since finishing sixth at the Southern Showcase to start the season, he has gone on to win the Jesse Owens Classic, the Randolph Invitational and now the Last Chance Invitational, running each race in less than 15:28.

At the Last Chance Invitational, Brush finished the race in 15:06.81, which was his second fastest time of the season and beat out second by 17 seconds.

He was joined in the top 10 by teammate Elijah Williams, who finished eighth with a time of 16:29.60. It marked a new personal record for Williams, who now has three finishes inside the top 10 this season.

In the girls race, McPhail didn’t just win, she dominated the event.

The girls got one more inside the top 25 thanks to Juliette Edwards finishing in 24th behind a time of 21:29.54.

Joining the Hornets inside the top five of both team standings were the Oak Mountain Eagles.

It was a particularly strong day for Oak Mountain’s girls, who posted six finishers inside the top 25 to claim third in the team standings.

Faith Scardino was the highlight with her fourth-place finish. The freshman ran the race in 19:41.78, which was a new personal record for her.

Behind her, Lauren Cole and Catarina Williams took 11th and 12th, respectively. Cole finished with a time of 20:45.13, while Williams finished two seconds behind.

In the boys standing, the Eagles finished fourth one spot behind Chelsea thanks in large part to Josh Stidfole.

The senior set a new personal record with his time of 16:33.03, which earned him a top-10 finish of ninth

Not far behind was teammate Matthew Womak in 12th. The junior finished with a time of 16:40.18 for the Eagles.