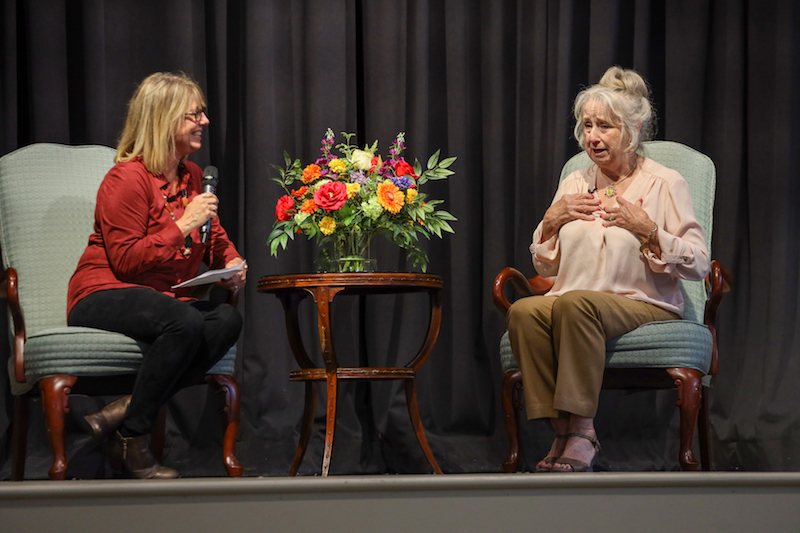 Laurie Stroud Franklin talks with cooking celebrity Brenda Gantt at a special fundraising event for CASA in Columbiana on Sunday, Oct. 24. (For the Reporter/Beth Chapman)

COLUMBIANA – Alabama Cooking celebrity Brenda Gantt came to Shelby County on Sunday, Oct. 24 and wowed a crowd of 300 who came to see her at The Grande Hall at Old Mill Square all in the name of charity.

“We need to lift each other up and be an encouragement to others,” Gantt said during the event, which will help have an impact on the lives of children through CASA.

After a barbecue lunch, Laurie Stroud Franklin, a former news anchor and now editor of Christian Family Magazine, interviewed Brenda. The crowd got the opportunity to hear about her newfound fame, her daily schedule, her favorite meals, her family and her deep-rooted faith in God.

Her homespun stories with her thick southern drawl lured her fans in closely as she told stories of her faith, her food and her skillet skills.

When asked what her best meal is—one that she would serve if Jesus were coming to her house—she said it would be fried chicken, black-eyed peas, sliced tomatoes and fried okra, while her favorite food to eat is chicken and dumplings.

As for what she said the most important thing to learn to cook is—biscuits.

“You want to be able to make biscuits because you can make so many other things like fried pies and dumplings,” Gantt said.

Her daily schedule begins at 4 a.m. each day, and her goal is to always to be a “lifter,” something she encouraged the audience members to be, and a reason she wanted to be a part of the special day.

Gantt’s first cookbook, “It’s Gonna Be Good Ya’ll” was recently released by Hoffman Media of Birmingham.  Gantt said it took many hours to translate her stories and recipes.

She became a social media sensation during the pandemic when some young men in her church asked her to teach their wives to make biscuits.

She made a video, posted it on Facebook and it went viral. Within two weeks, she had one million followers on her Facebook page.

“Brenda Gantt was a great lunch hostess and a phenomenal speaker,” said event attendee Carol Hill. “She was just like I expected her to be—genuine, gracious and kind.”

Hill added her deep appreciation for Gantt coming to Shelby County to help such a worthy cause.

The proceeds from the event benefit CASA’s mission is to prevent child abuse and neglect and to recruit and train volunteers to go through the court process with children who have been abused or neglected. They also offer several parenting classes throughout the year.

Their goal is to ensure that every child has a safe and permanent home.

CASA is funded in part by the Children’s Trust Fund, a Shelby County Community grant, local foundations and the kindness of many individuals.

To see how you can become a CASA Volunteer, visit Casaofshelbycounty.com.