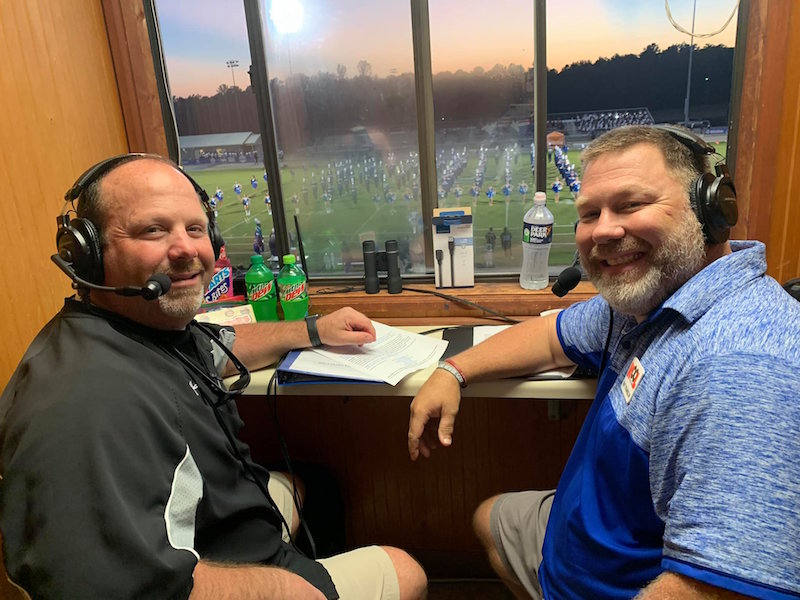 Almost directly out of a scene in the “Christmas Story,” Ray Franklin fired a BB gun while in the woods with his friend Richard Powers. At that moment, what Franklin didn’t know, is that when the BB ricocheted off a tree and back to hit Powers near his eye, a lifelong friendship was born.

To this day, the two throw jabs left and right each Friday night of the high school football season as Chelsea’s broadcast crew for Kool 96.9 FM—a venture they have been on for the last five years together as former coaches at Chelsea Middle School.

“We just feed off each other. We’ve been around each other and the game for a long time, we were in each other’s wedding, I was a player, we’ve both been managers, we’ve both coached,” Powers said. “We just have a great relationship, and it comes out when we’re on air.”

Getting to that level of comfort with one another, however, came with its share stories for the two. 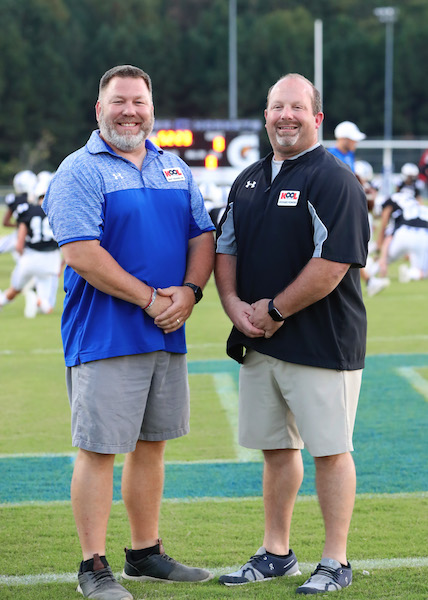 As childhood friends in the city of Chelsea, Franklin and Powers grew up alongside each other, which is where their current on-air relationship began to grow.

The jabs for the two go on for quite a while, including Powers reminding Franklin that he stole his freshman girlfriend or the two trying to figure out who was the better football player.

Through it all, however, a friendship blossomed and that led to them coaching together at Chelsea Middle School, which brought them in touch with Chelsea football’s program more than 30 years ago.

“We’ve been around the Chelsea football program probably longer than anyone other than coach (Roger) Hibbs,” Franklin said.

The first group the two of them coached at the middle school included guys like current city councilman Casey Morris, Matt Lang and others who are all in their 30s with kids now.

But as their coaching days began to wind down, they wanted to find something else that could keep them with the program.

It started with Franklin doing color for the radio broadcast at first alongside play-by-play broadcaster Doug Ragland.

One night, however, Powers got a little bored after he stopped coaching and was going to the Oak Mountain-Chelsea game with his family. As a former coach, rather than sit in the stands, he wanted to do something productive during the game, so he asked Franklin if he needed help with stats.

Powers kept stats for that first game, then filled in for both Franklin and Ragland in the coming weeks on different occasions before fully taking over alongside his lifelong friend.

“I can’t coach anymore because of my admin (assistant principal) position at Pelham Ridge, but this was a great way for both of us to stay in touch with a program that we poured so much into,” Powers said.

And that is when their unique and award-winning style of radio took off.

“You’ve got radio guys who do it and are really good, but I think our coaching experience, knowing each other and having coached these particular kids, makes it special,” Franklin said. “We know them and their parents. It’s a great connection to have. Plus, we tell it like it is. We don’t have a filter, and sometimes that gets us in trouble.”

Part of what makes the duo special to listen to each Friday night, aside from their colorful commentary, is their connection to some of the same student athletes they coached for several years at the middle school level.

With next year’s junior class the final of the group they coached, they aren’t taking any of the current moments for granted.

“Richard and I love that. We love on these kids and just want the best for them. So it is neat to see those connections several years later,” Franklin said. “We get to talk to them about more than just football now. I’ve been in one of their weddings, some of them go to church with us. I’ve been in hospital when one of their babies was born. It’s more than just about football, they become more than players and become friends.”

One of those special moments came recently, following the sudden death of Michael Gibbs.

Gibbs, who died at the age of 19, played for the two coaches, and they both quickly saw just how special he was.

“I’ll never forget we got him seventh grade and I told Richard, ‘This kid is special,’” Franklin said. “He was quiet, but such a great leader hard worker.”

At a recent game, the Gibbs family came up to both Powers and Franklin and thanked them and talked with them for a few minutes.

“That was special,” Franklin said. “When I quit coaching, I knew creating those relationships would last.”

For Powers, he talked about watching some of this year’s standout players for the Hornets and how much they’ve grown over the last few years

“When Hayden Garrison as a seventh grader, I would have never expected him to be the quarterback,” Powers said. “It was actually Cooper Griffin, but Garrison developed so well over the years. As for Griffin, we knew he needed to be used somewhere on the field and that’s still the case today. He would do anything he could to get on the field, that’s why you seem him doing everything on Friday nights.”

Franklin joked that if OJ Howard or another great NFL tight end walked in to take over the position from Griffin now, he would immediately go to the coaches and ask them what position he could move to in order to benefit the team.

The list goes on for the growth both former coaches have seen of those players as they watch them from the booth each week.

“It’s really neat to see these kids who come out in seventh and eighth grade football who haven’t developed yet,” powers said. “Then, you still see these guys, some of them are grown men, still come up and say hey and call us coach. We hope they still look up to us, because that shows we built that relationship. It’s neat to hear from those guys.” 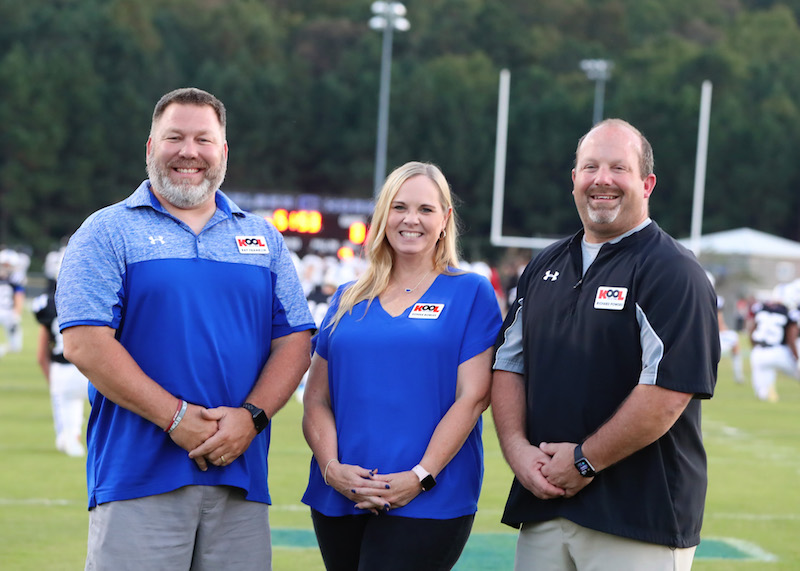 Franklin and Powers with Donna Bowls, producer at Kool 96.9 FM. (For the Reporter/Cari Dean)

During a recent game, Franklin and Powers got distracted as they often do by something the chain crew was doing. Tangled up trying to move the chain following a first down, the two couldn’t help but let a few jokes out.

“Let’s go, get off the couch,” Powers said, trying to hurry them along. “I wish I could get somebody up off the couch to go on a walk with me.”

“You mean your wife won’t get up off the couch and go on a walk with you?” Franklin responded.

“So you just offended your wife and demoralized the chain crew all in one statement,” Franklin responded with a laugh.

Those unscripted, personalized moments are exactly what you get when you listen to the two, who openly admit they let their personal lives out on the radio and struggle to have a filter sometimes.

Just in the last few weeks alone, they’ve argued about the “Golden Girls,” Quebec and many other unexpected moments, but all to keep the broadcast light, fun and interactive for the fans, many of who text in throughout the game.

“We obviously want to present the game, but there are times we can do more. It’s a mix of comedy and football broadcast,” Franklin said. “We like to lighten the mood, especially when we’re losing.”

And it is that banter that makes the duo an ABBY-Award winning broadcast crew for Kool 96.9.

It’s all because they have a passion for Chelsea’s football program.

“People in Chelsea see my passion, and that’s why I’m still doing this. It’s tough to hide that. Some of my honesty may be a little too brutal, but I think we are better this year than we have been,” Franklin said. “Sometimes we’re so excited, nobody will have any clue what is being said, including ourselves.”

When we started this season, I told a group of dads, this group of seniors hadn’t won a ton of ball games. But as eighth graders, I told them, they’re the hardest bunch of kids I’ve ever coached. As far as hard-nosed working kids that give you everything they’ve got, this is that group. They might not win every ball game, but they’ll give you everything they have during every game. They’re resilient and good leaders.

And at the end of the day, while they try to be nonbiased and cover the biggest parts of the game for both teams, they ultimately still love getting to see the Hornets on the field each week.

“My favorite part, is how hard these kids scrap every season. We say it most weeks, we’re outsized, out maned and out athlete, but these guys scrap and fight, and they never give up,” Powers said. “That’s what I enjoy. When the chips are down, these guys don’t give up.”

So, for the foreseeable future, they’ll put on a headset each Friday night, bring you the play-by-play of each Chelsea game and even throw in some colorful commentary you won’t see coming.

“We’ve been friends for a long time, even despite shooting him in the eye with a gun and stealing his freshman girlfriend,” Franklin said. “So we’ll do this together as long as we both still want to.”