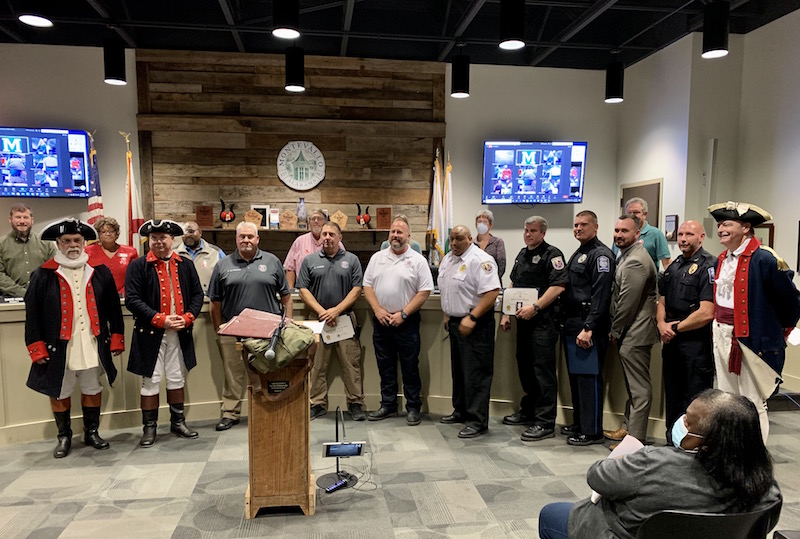 MONTEVALLO – Local first responders were honored for their work and dedication during the Montevallo City Council meeting on Monday, Oct. 25, three days before National First Responder Day on Oct. 28.

“In recognition of our community leaders and first responders who answer the call to serve, the Sons of the American Revolution (SAR) believes in recognizing those who represent the ideals of patriotism and citizenship,” read an SAR document about this year’s commendations. “One such program is SAR’s commendations and awards.”

Officer Jason Thrash with the University of Montevallo Police Department was selected because of his dedication to the department and willingness to work at times when the department is short-handed.

“He always has a good attitude,” his commendation reads. “He remains supportive of the department, the students, faculty and staff. This is only a few reasons he was chosen as our Officer of the Year.”

Investigator Dustin Gray with the Montevallo Police Department, who is assigned to the Alabama Drug Enforcement Task Force, was selected because of his help with rendering aid to a suspect in custody who was experiencing a medical emergency related to an apparent overdose.

“Under the supervision of the SBI lieutenant on scene, the suspect was given multiple doses of department-issued Narcan,” his commendation reads. “The suspect began to recover and admitted that he had ingested a potentially fatal dose of heroin as the agents entered his home. Investigator Gray and the other agents’ quick thinking and decision-making led to the most favorable outcome to a spontaneous emergency, preventing the loss of the suspect’s life.”

Officer TJ Wolfe, also with the Montevallo Police Department, was selected because of his response to an emergency call of an infant choking.

“Wolfe, realizing that the Montevallo Fire units were already dispatched to another call and that he was the closest help for the child, he notified dispatch that he would be en route to the choking child,” his commendation reads. “Officer Wolfe arrived on scene and performed a Heimlich maneuver and was able to get the child to begin breathing. Officer Wolfe’s quick decision to divert and render aid to the child made the difference and resulted in a positive outcome in a potentially life-threatening situation.”

Shannon Blackburn, a member of the Montevallo Fire Department, was selected based on his leadership with the department’s explorer program for teens who are interested in learning about fire and EMS jobs.

“Shannon has taken the program from almost non-existent to having 10-15 young, excited members,” Blackburn’s commendation reads. “With his leadership, we will have several new members joining Montevallo Fire and Rescue each year.”

Reggie Darden, also a member of the Montevallo Fire Department, was selected based on his extraordinary involvement since he joined the fire service several years ago.

“Last year, Reggie ran a total of 496 calls, which is possibly the most calls run by a member in one year in the history of Montevallo Fire and Rescue,” Darden’s commendation reads. “So far in 2021, he has already run over 400 calls. Reggie also assists with the explorer program and pretty much any other task he is asked to help with.”

Martin expressed gratitude to all first responders for their service to the community.

“I know I’m biased, but we really do have a wonderful group of people in all of our public safety groups here,” Councilmember David King said. “They go above and beyond every day to make sure our community is served and safe.”

• Approved a proclamation for Red Ribbon Week on Oct. 23-31.

• Held a first reading of an amendment to a city ordinance prohibiting thru-truck traffic in designated areas: Shelby County 216 from Alabama 25 and 155 and Shelby County 12 (Spring Creek Road).

• Held a first reading of an amendment to a city ordinance regarding no parking zones (amended); the east and west side of North Boundary Street from Valley Street to Oak Street.

• Voted to donate $1,000 to the Montevallo High School band for transport expenses related to the football playoffs trip.

• Approved Becky Tutwiler’s appointment to the Planning and Zoning Commission for a term to expire Oct. 30, 2026.