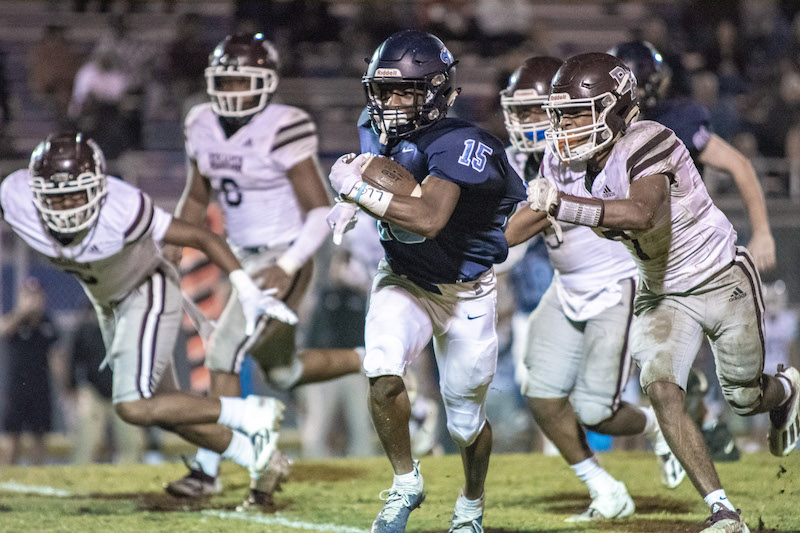 Calera will host Chelsea this Thursday night in our Game of the Week. (For the Reporter/Markee Canada)

Well, just like that, we’re down to the final week of the regular season.

It has come and gone in the blink of an eye, but with nine of 11 teams in the AHSAA from Shelby County making the playoffs, it’s just the beginning for many teams, while two will look to go out with a bang.

Though the playoff-excitement is building, the final week of the regular season has its share of exciting games, including five on Thursday night, that surely won’t have anyone overlooking this week’s action.

Calera vs. Chelsea (Game of the Week, Thursday)

It doesn’t get more fun than two county teams playing their best football looking to end the regular season on a high note going into the playoffs. Both of these teams have hit recent hot stretches with Calera winning five of six to improve to 6-3 on the season and Chelsea winning four of five to get to 4-5 on the season after a 0-4 start. A big key for both has been the defensive side in their last several games. Calera now giving up 21.7 points per game and Chelsea giving up 28 points per game. Both having been playing their best on that side of the ball lately. That said, it’s the two offenses that make this one exciting. Calera’s loaded group hasn’t played its best lately and has still played good football and is coming off a 41-17 win against Benjamin Russell, while Chelsea is led by a strong group as well and has scored 31 or more in five of its last six. With both playing their best football of the season, this one should be a tight one, and I’m not sure there is a favorite, so we’ll make Calera’s home-field advantage the deciding factor. Calera 31, Chelsea 28

Oak Mountain’s three-game gauntlet to end the regular season ends this week, but will also follow with a battle against undefeated James Clemens in the first round of the playoffs. But to end the regular-season, they’ll take on Class 6A No. 1 Clay-Chalkville, who is now 9-0 on the season. The Cougars are scoring 51.2 points per game and giving up just 12.7 points per game. Last year, the Eagles put up a good test in a 21-14 loss, but couldn’t convert on several chances offensively late in the game. This year, they’ll likely be without Evan Smith until the first round of the playoffs, which means the offense is going to have to have a big week with a young quarterback against a good defense. I do think Oak Mountain’s defense is extremely good this year and will keep this game close, but Clay-Chalkville seems to be on a path for a championship in 6A, which means this will be a tough test for the Eagles. Oak Mountain 14, Clay-Chalkville 28

Spain Park will be looking to win two games in a row to end the season after losing seven in a row following an opening loss. The Jags took down Tuscaloosa County 35-7 last week for their second win of the season, and will now look to finish with some momentum going into the offseason with a matchup against 6A Hueytown—a team they beat 63-62 in a wild game last year. Hueytown, however, is 8-1 this season with seven wins in a row. They’re scoring 55 points per game, and while the defense has given up 55 and 57 in two games this season, the offense has scored 40 or more in every game and 50-plus in seven games this season. The Jaguars giving up 33.6 points per game may be too much in this one. I think they’ll score some points, but Hueytown’s offense has been one of the state’s best. Spain Park 21, Hueytown 42

It’s not a region game, and it’s the week before the playoffs, but it means the world to both Pelham and Homewood to win this game going into the playoffs. The Patriots have won the last eight games in a row with Pelham’s last win in the series coming in 2011 before the two teams took a break for three years. The Panthers, however, look to have another good chance this year to break the losing streak in the rivalry. Pelham enters with three wins in a row after losing two straight by three points, while Homewood enters with three losses in a row. But both teams are very similar on paper. Pelham is scoring 27.6 points per game compared to 26.6 points per game from the Patriots, while the Panthers are giving up 20 compared to Homewood’s 25.4. Pelham’s defense is playing good enough to win this game. It’s a unit that has given up 14 in three straight games and 14 or less in five of nine this season, while the Patriots have scored 18 or less in three straight. That said, Pelham may be the more talented team this season, but the Panthers will have to prove it on the field. Pelham 21, Homewood 24

It may be against a Class 5A team, but the Helena Huskies will have their hands full this week against UMS-Wright. The No. 7 team in 5A, the Bulldogs are 8-1 with eight wins in a row since losing 13-0 to 7A Baker in the season opener. The reason for their success is the defense. Baker is giving up 8.6 points per game and have given up seven or less in three straight games and 15 or less in eight of nine games. But Helena’s defense is giving up just 18.8 points per game, and the Huskies have proven they have won close games, which will likely come in this one with two talented defenses. Helena has utilized a remarkable sophomore season from Jordan Washington to wear down teams late, and it’s likely they can do that again, similar to last year’s 12-7 win in this game. Helena 27, UMS-Wright 20

The Briarwood Lions picked up a big win against Homewood last week and will now look to finish off a 9-1 regular season this Friday at Corner. The Lions should have a strong chance to do so against a 2-7 5A team that has six losses in a row. Corner is scoring 18.8 and giving up 34.1 points per game, while Briarwood is scoring 32.9 and giving up just 17.3 per game. Expect Briarwood’s defense to have one of its best games of the season. Briarwood 35, Corner 7

The Shelby County Wildcats will look to head into their home playoff matchup with a two-game win streak in this Friday’s matchup against Talladega, and they should have a great chance at doing so. Talladega is 1-8 on the season with its only win coming against Elmore County last week. Outside of that, it’s a team that has scored 22 or less in all but two games. Shelby County’s defense has given up 21 or less in four straight and in five of six. The Wildcats’ defense alone should be enough in this game. Shelby County 35, Talladega 13

The Montevallo Bulldogs will put their hot stretch of play to the test against Class 1A No. 3 Maplesville this week. The Bulldogs are playing their best football with five wins in a row, scoring 37 or more in each and 48 or more in four of five and giving up 14 or less in four of their last five games. But Maplesville doesn’t lose often, and it’s a team that is now 9-0 on the season that has scored 40 or more in five of nine and has given up 21 or less defensively in each game. Being three classifications higher, Montevallo will have opportunities, but it will take a special performance to take down a perennial power. Montevallo 20, Maplesville 27

The Vincent Yellow Jackets will miss the postseason, but this year’s group is special and one that continues to send the team in a new direction. The team has a chance this week to finish above .500 in a season at 6-4 for the first time since 2013. That means something to head coach Lucas Weatherford and his players. It is a group that will give every ounce of effort they have to make that happen against a Prattville Christian team that is 3-6. It’s an opponent that has won all three of those games in the last five , but one that is also scoring just 16 points per game and givin gup 30.9 points per game. Prattville Christian does have a classification advantage, but Vincent’s defense is the best it has been in years, and the offense will be motivated enough to end this season with a 6-4 record. Vincent 34, Prattville Christian 27

The Cornerstone Chargers will look to finish this season on a high note, and they should have a good chance against a Hooper team that is struggling on both sides of the ball. Hooper is scoring just 11.3 points per game and giving up 46.3 points per game. It’s a team that has lost five in a row and scored seven or less in four of those five games and 13 or less in all but two games. Hooper did beat Banks 23-22 this season, a team Cornerstone lost to 54-0 in game two. So this is a chance for the Chargers to show how far they have come. Cornerstone 34, Hooper 35

It is the final game before the playoffs for Coosa Valley and they’ll get No. 6 Sparta. So far this season, Sparta has scored 43.8 points per game and is giving up just 17.8. Coosa Valley’s defense is playing well enough to keep this one close at 23.8 points per game, but the offense still has another step to take to tackle a top-10 opponent in the AISA. Coosa Valley 17, Sparta 28

Evangel will take on Southern Prep this week looking to continue gaining confidence ahead of the ACSC State Championship game against Ezekiel. The lightning sit at 8-2, while Southern Prep is 7-2. Evangel, however, has played better against similar opponents and should be the favorite to walk away victorious in this one. Evangel 40, Southern Prep 12