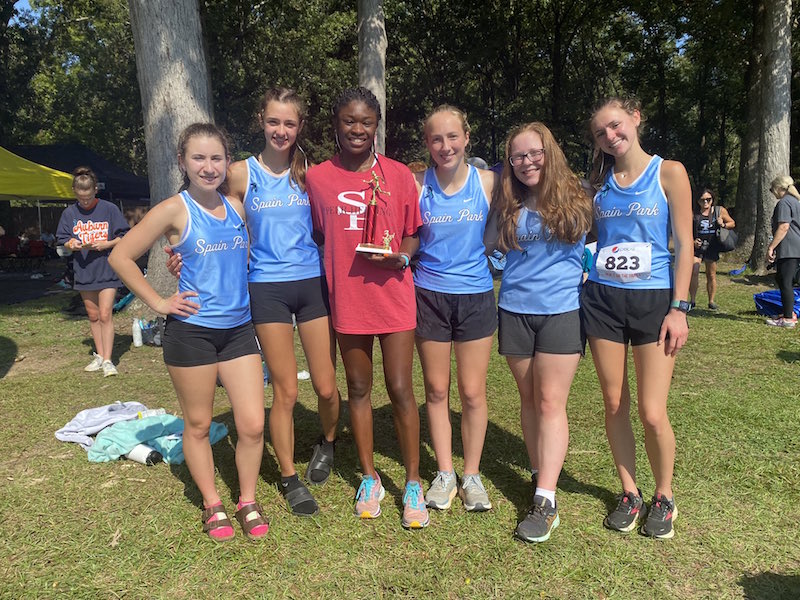 HOOVER – In their final regular-season meet of the season on Thursday, Oct. 21, the Spain Park Jaguars finished with a bang.

Hosting the Spain Park Last Chance at Veterans Park, the Jags were able to win both the boys and girls races to enter the postseason with confidence.

The girls had a remarkable day, coming close to sweeping the top five spots. The Jags took the first four spots in the standings with Mackenzie Culpepper highlighting those finishers as the winner.

Peyton LeCroy finished out the top four by claiming fourth with a time of 22:16.09.

With those four high finishes, the Jags had already done more than enough for the team win, as they finished with 17 points compared to 54 of Vestavia Hills in second.

Laney Browder and Anna Hoffman finished back to back in 21st and 22nd, while Camden Moore and Madalyn Serio did the same in 24th and 25th.

Also competing in the girls race were runners from Indian Springs and Montevallo.

Indian Springs was led by Sohana Caplash, who finished 19th with a time of 25:41.68, while Montevallo was highlighted by Yuliana Gutierez in 26th behind a time of 27:16.26.

That gave the Jaguars 23 points in the event, which was 20 points ahead of Wetumpka for the win.

They were highlighted by Kenneth Bishop and Weston Higginbotham, who took second and third, respectively. Bishop finished with a time of 18:10.25, while Higginbotham was 14 seconds behind that.

Garrett Bishop, Webb Harper, JT Brownlee and Mac McPeters finished fifth through eighth in that order. All finished with times between 18:31.54 and 18:40.45.

The Montevallo Bulldogs, Vincent Yellow Jackets and Indian Springs all had athletes running in the event as well.