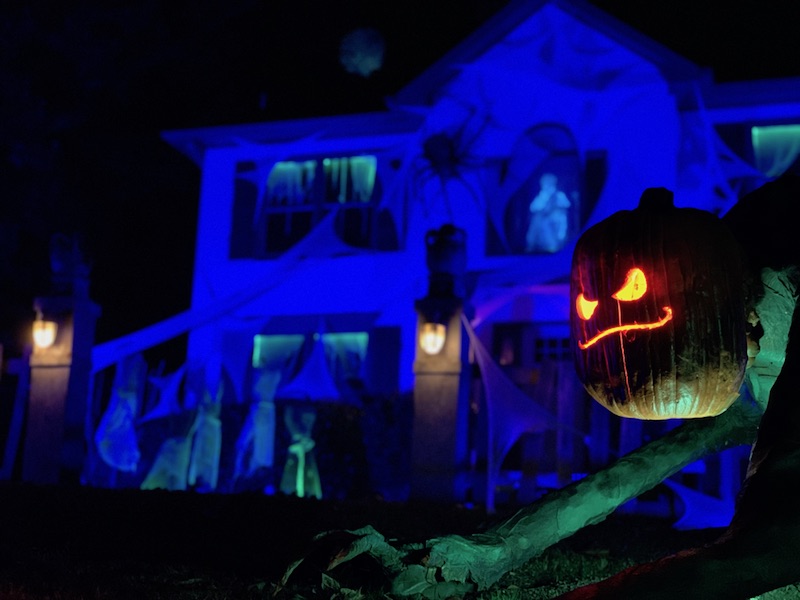 HELENA – If you’re driving down Augusta Way in Helena in late October, you would be able to pick out the house of the Thomas family. Their yard is the most elaborately decorated house on the street, with handmade ghouls, ghosts and apparitions layered throughout the lawn. These fantastic creations are made by the house’s owner Michael Thomas, who, as eloquently said by his 7 year old daughter, “gets real obsessed with Halloween.”

“We’ve lived here about eight years,” Thomas said. “I originally started with just the spider and the webbing and it’s just grown from there.”

Every year Thomas adds something different to his collection, taking inspiration from things he finds online or even from movies. His house is adorned with a giant spider crawling above the door, realistic looking spider webs, and blacked-out windows that are draped with ghostly shrouds. Currently, his lawn is inhabited by a Harry Potter Dementor-like shrouded figure, three pumpkin monsters who appear to be crawling out of the ground, and five ghostly apparitions projected onto his house, a mausoleum Thomas said is still a work in progress and three ghosts who appear to be floating in mid-air.

Thomas’s favorite feature, however, is the moon he has perched on his roof that casts different images every few minutes. If you were driving down the street, you would have to take a second look to make sure there wasn’t really an owl or a black cat sitting in front of the moon. It’s Thomas’s favorite, but not his wife, Moriah’s.

“It’s so dangerous,” she said. “He fights fires for a living but nothing scares me like when he has to climb up to turn that thing on.”

Everything featured in Thomas’s collection he made himself. The three pumpkin creatures, for example, he made with two-by-four wood, chicken wire, paper maché, and foam pumpkins he bought at the store. With immense care and attention to detail, they look like something out of a movie set.

At night, the house truly comes alive. Thomas has different styles of lighting casting onto the house so it pops against the night’s darkness. On Halloween, they bring out the smoke machine and play music to really put on a spooky show.

“Even Halloween houses, lighting is your best friend,” he said.

The past couple of years, Thomas said they haven’t had the number of trick-or-treaters that they would have hoped. He and his wife both hope that this year they get a bigger crowd.

“We are the full bars people!” Moriah said laughing. “I mean you look at our house, you know we have the good candy.”

It’s clear Thomas’s creativity knows no bounds. Moriah said she is always blown away by what he comes up with each year.

Thomas said he’s already planning for next year because getting a head start is key.

“I really want to do something like an aerial projection,” he said with excitement. “Like maybe have something flying from the sky? That would be so cool.”