Calera downs Chelsea to close out best regular season since 2016 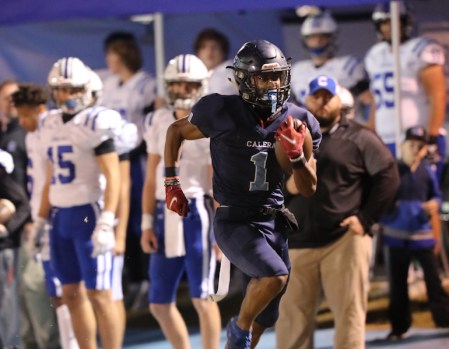 Kobe Prentice had three touchdowns and 146 yards receiving to help lead Calera to a 31-21 win against Chelsea on Thursday, Oct. 28, and the Eagles’ best regular-season finish since 2016. (For the Reporter/Cari Dean) 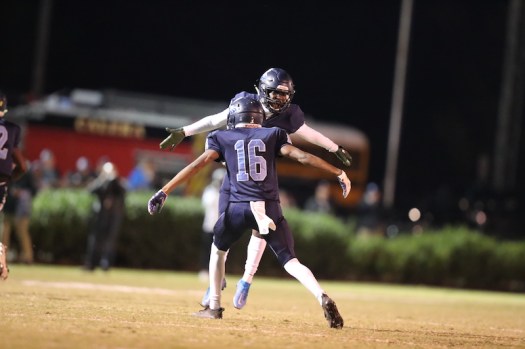 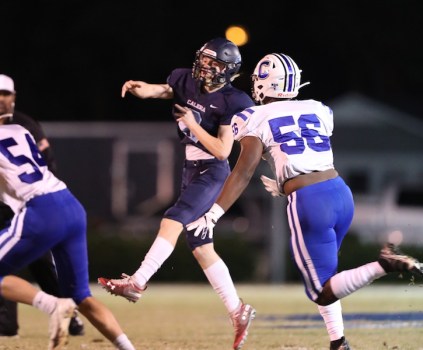 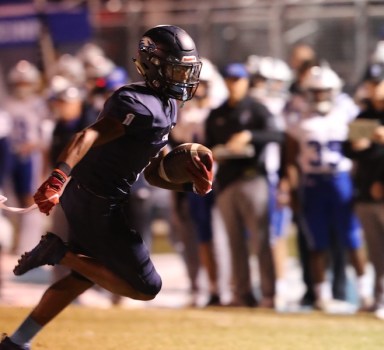 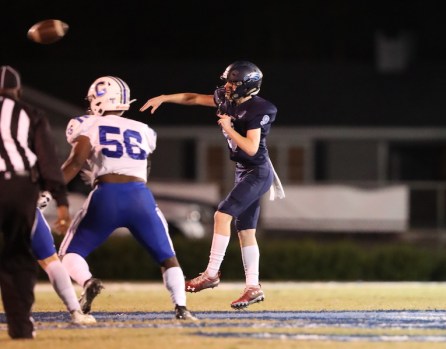 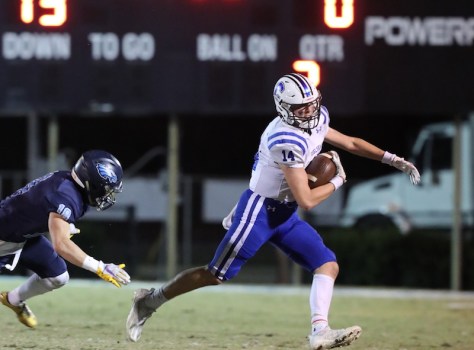 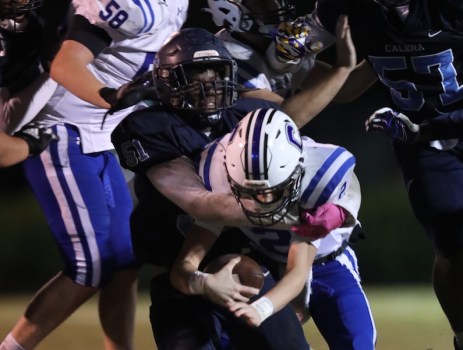 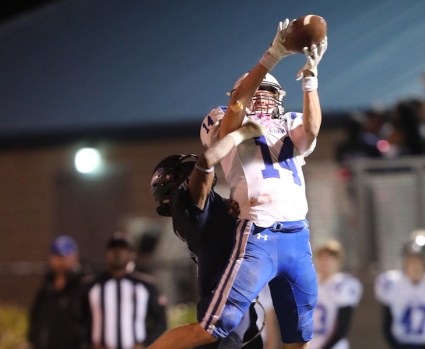 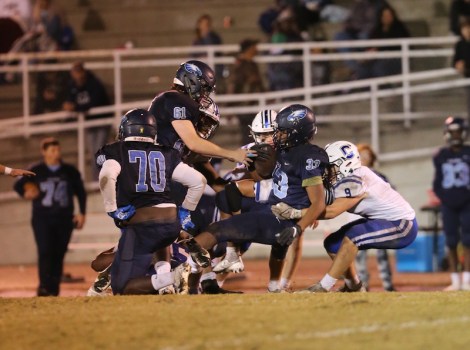 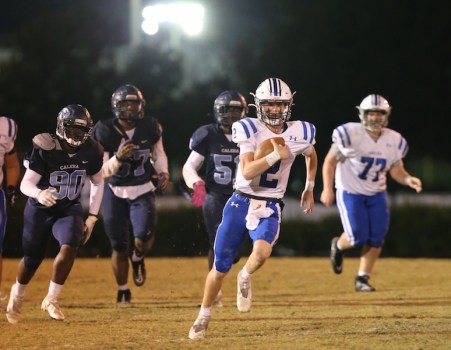 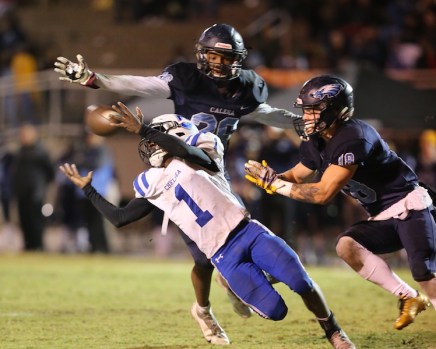 CALERA – For the first time since 2016, the Calera Eagles finished the regular season with at least seven wins in a season after fending off Chelsea for a 31-21 victory on Thursday, Oct. 28.

The Eagles scored 25 first-half points and got five combined touchdowns from Preston Stokes, Kobe Prentice and Chris Cotton in the win to help them finish a perfect 6-0 on their home field this season and improve to 7-3 heading into the playoffs.

“The kids, they’ve bought in. We’ve had our headaches teaching them how to win, but everybody has been on board,” head coach Jason Hamlin said after the win. “The seniors have kind of led this team how we needed them to. Everybody says, ‘Coach Ham, coach ham.’ I didn’t do anything. The seniors led the ship, I’m just an angry old man that gets after them when I need to get after them. The seniors have done a great job of leading this team to where we are right now.”

And through getting the players to buy in during his first year, the Eagles have gone from one head-to-head win each of the last three seasons and no wins on their home field to seven wins overall, an undefeated record at home and their first playoff appearance at the 6A level.

Calera got its first big boost of the game on the opening kickoff when Wesley Head recovered a bobbled catch by the Hornets to set up the Eagles at Chelsea’s 28-yard line.

Following an 11-yard catch from Braylyn Farrington and a 2-yard sweep to Kobe Prentice, Chris Cotton went to work from there with carries of 10, 3 and 2 yards, the latter of which went for a touchdown that gave the Eagles a 6-0 lead following a missed PAT.

Then, third down became Calera’s best friend the rest of the half.

The Eagles scored their first third-and-long touchdown on a screen pass from Preston Stokes to Prentice on third-and-15 that saw Prentice turn on the jets for a 49-yard score and 13-0 lead with 6:28 left in the first half.

Chelsea responded to that with its lone touchdown of the half early in the second quarter when Hayden Garrison hit Thomas Simpson for a 20-yard touchdown pass to cut the deficit to 13-7 with 10:43 to play in the half.

From there, however, the Eagles scored twice more on third-and-long.

The next one once again went to Prentice when Stokes hit him on a quick screen on third-and-10. Prentice cut back across the field behind the offensive line and went 52 yards to the house showing his speed once again.

“You get the ball to your playmakers,” Hamlin said of the third-down conversions. “KP is just unbelievable. He’s hard to contain. We find a way to get him the ball, and it’s just magic. It helps that they have to respect guys like Braylyn, JG and Windham out there too.”

The Eagles got one more shot with 1:52 left in the half to score more points, and they capitalized once again on third down.

This time, on third-and-12 from the Chelsea 43-yard line, Cotton broke through a hole up the middle untouched for the touchdown to make it 25-7 at the half.

Coming back out for the second half, the game became a bit more stagnant, but the Eagles still had one more big third-down play between Stokes and Prentice.

On third-and-15 from the 26-yard line, Stokes threw up a pass to Prentice in double coverage. Despite that, the senior receiver lept up just behind two Chelsea defenders and came down with the ball at the goal line for a touchdown.

Calera again missed an extra point, which made it 31-7 with 2:45 left in the third quarter.

Chelsea did make a push in the final eight minutes of the game, starting with a 9-yard touchdown pass from Garrison to Emerson Russell, which was followed by a successful two-point try to Cooper Griffin to make it 31-15 with 7:02 left to play.

After being forced to punt on its next drive, the Hornets got a break when they recovered a fumble on the return with 4:31 to play.

That gave Chelsea a chance, and the Hornets capitalized when Garrison connected with Griffin from 8 yards out. This time, however, the two-point try was no good, leaving Calera in front by 10 with 3:20 to play.

Chelsea did get the ball back one more time with 2:18 to play, and the Hornets drove it deep into Calera territory, but a ricocheted pass off a defender laying on the ground ended with an interception to seal the game.

“I can’t put it into words. The senior class has bought in with me, and they’ve led the team to 7-3, which is remarkable,” Hamlin said. “Hopefully we are setting the standard to where every year, this is what it needs to be.”

Calera will now travel to Spanish Fort to take on the No. 5 team in the state in the opening round of the playoffs.

“I told people when I took the job, the goal was playoffs, something this group of players hasn’t experienced before,” Hamlin said. “We just kind of took it week to week. We were able to show them just how close we were. We were 14 points away from being region champs. They’re excited, and we’ll be locked in. The big picture, the pressure is on Spanish Fort. Nobody really expected us to be here, so we’re going to have a good time while we’re here.”

Garrison finished with three touchdown passes to lead Chelsea for the night.

The Hornets will now travel to Oxford for the opening round of the playoffs.