Montevallo ends regular season with win against 1A No. 3 Maplesville 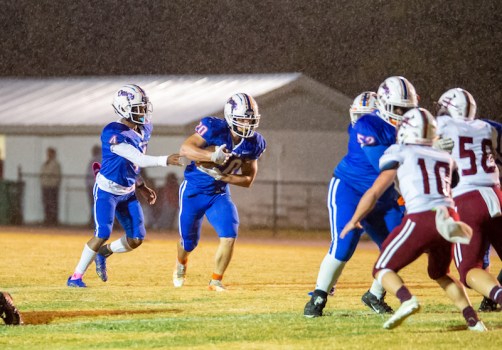 Joseph Anderson ran for more than 250 yards and totaled all three touchdowns in Montevallo’s 20-7 win against Maplesville on Oct. 28. (For the Reporter/Larry Dancy) 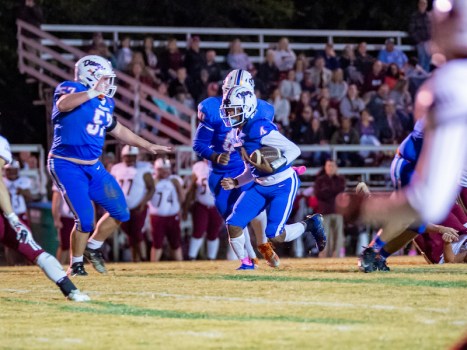 Montevallo trailed by just one point in the third quarter, but the Bulldogs couldn't close the game in an opening-round loss to Jackson on Friday, Nov. 5. (File) 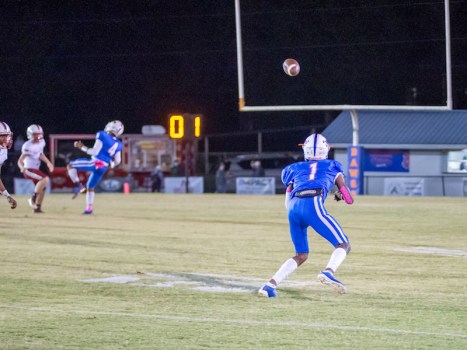 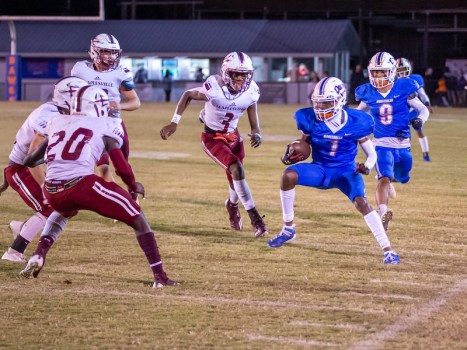 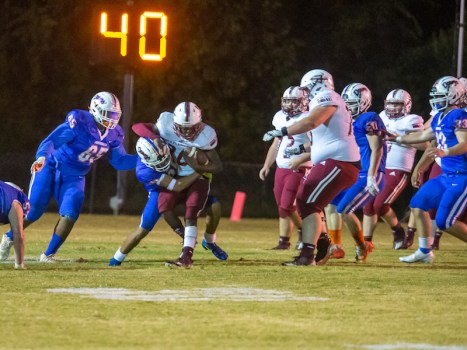 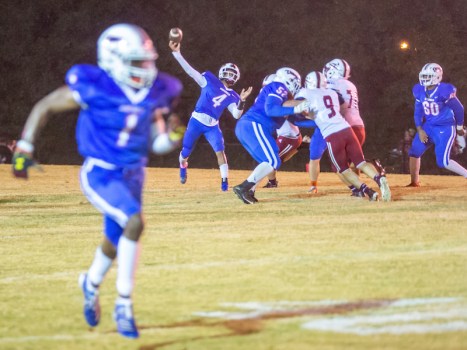 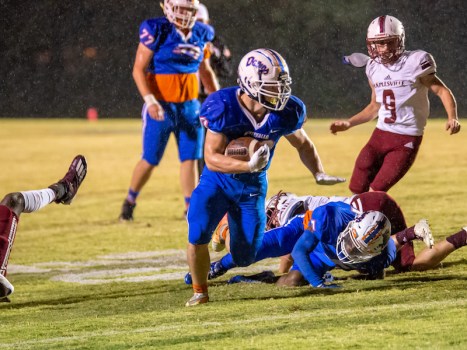 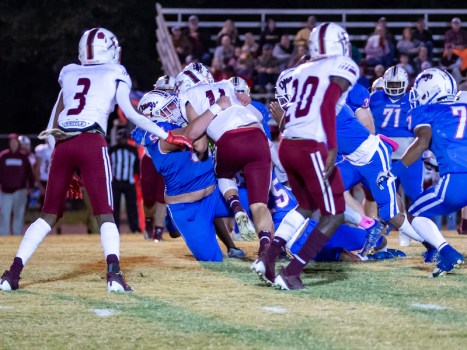 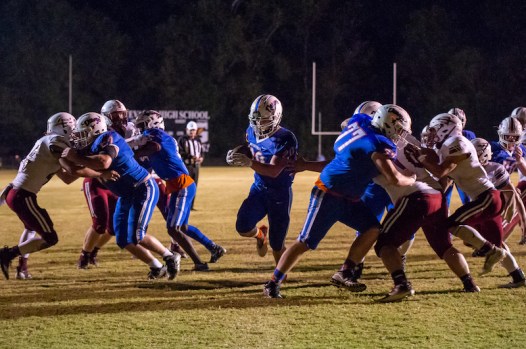 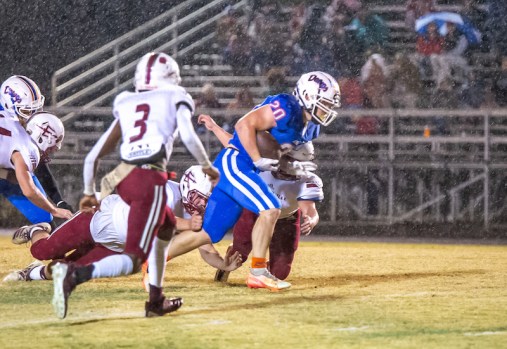 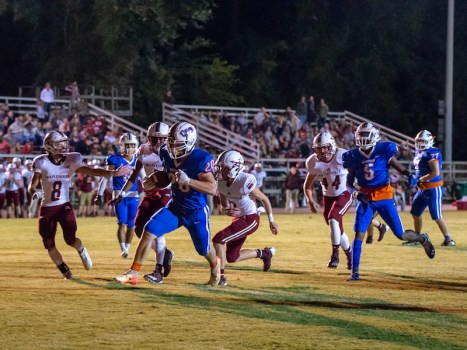 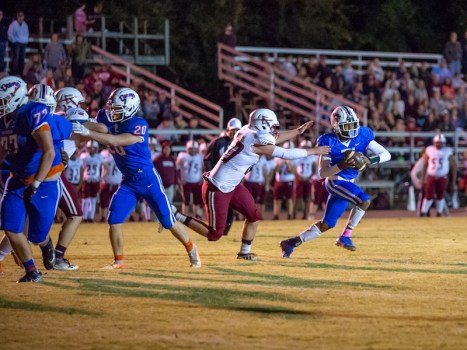 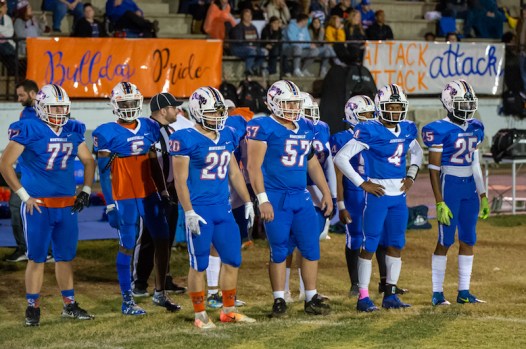 By JORDAN BROOKS | Special to the reporter

MONTEVALLO – Behind 254 yards and three touchdowns on the ground from Joseph Anderson, the Montevallo Bulldogs notched their biggest win of the season on Thursday, Oct. 28.

The senior running back scored all of the team’s touchdowns and had 36 carries to lift the Bulldogs to a 20-7 win against Class 1A No. 3 Maplesville. The win helped Montevallo improve to 8-2 heading into the playoffs, while the Bulldogs handed the Red Devils their first loss of the season.

“For three or four weeks now, we haven’t had to play a game like this, so sometimes you worry about when you get in these situations how you are going to respond,” Montevallo head coach Blake Boren said after the win. “I think it’s great for are kids to experience this going into the playoffs. Maplesville has a great tradition, and they are one of the premier programs in the state. Their kids played as hard as anybody we’ve played in two years.”

After both offenses failed to convert early, the Bulldogs were able to put the first score on the board late in the opening quarter.

One play after a sack, Anderson busted up the middle for an 8-yard score to give Montevallo a 7-0 lead with 1:22 left in the first quarter.

Montevallo had a chance to add a second touchdown early in the second quarter, but an interception in the end zone cost the Bulldogs points.

The Red Devils offense took advantage and was ignited by a 23-yard run from Brady Harrison slipping multiple Montevallo defenders. The play action that followed threw off Montevallo’s defense for a 56-yard pass to Jakavion Jackson, giving the Red Devils a shot to score. Harrison capped the drive off with a 2-yard touchdown run tying the game 7-7 with 1:44 left in the half.

Early in the second half, Maplesville had a chance to take its first lead of the game, but Montevallo’s defense came up big by forcing a turnover on downs.

The Bulldogs responded on the following drive with a heavy dose of Anderson, who ran the ball for 10-plus yards on multiple occasions before powering his way into the end zone from 2 yards out for a 14-7 advantage with 2:21 left in the third quarter.

After trading possessions, Maplesville looked to have come up big by forcing a punt from the Bulldogs at their own 17-yard line.

Boren, however, had other ideas. After seeing something they liked, Montevallo faked the punt in a huge risk, and it paid off with a first down after the chains were brought out to measure.

From there, the Bulldogs controlled the clock for the remainder of the game driving down to the Maplesville 5-yard line. Montevallo sealed the drive with one final plunge from Anderson on a 1-yard touchdown run with 1:08 left.

“I’m really happy for our kids,” continued Boren. “I think it shows great senior leadership.  Everything that we’ve talked about since I’ve been here we saw tonight.  We faced a little bit of adversity and our kids fought it and overcame it.  I think we have a really good group, a group that wants to create their own legacy.  And I think they’ve done that now by winning their eighth game.  This is a special team and I’m happy to be a part of it.”

Montevallo will start the playoffs next week with a match up on the road against Jackson High School with kickoff set for Friday, Nov. 5 at 7 p.m.