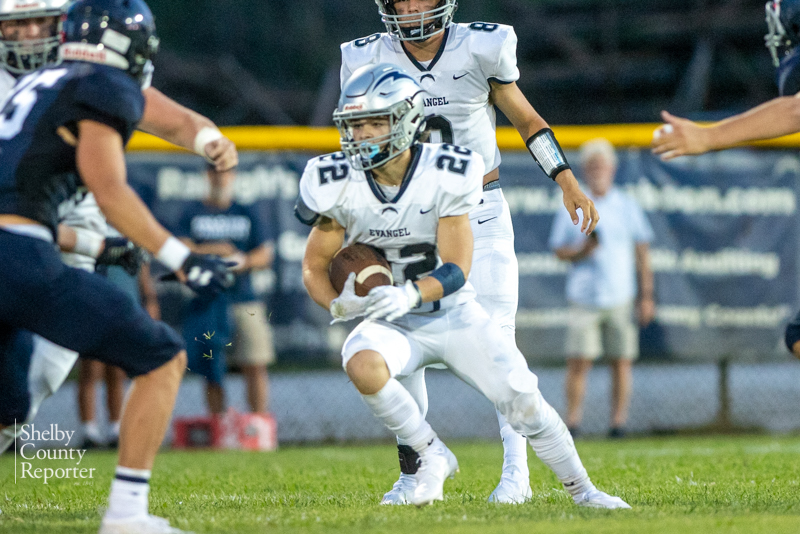 ALABASTER – Evangel Christian School closed the regular season Oct. 29 with a 43-14 senior night win over Southern Prep Academy. The Lightning took a 36-0 lead into the half after a trio of Eli Whitfield touchdown passes and two touchdown runs from Hunter Atkins.

A highlight of the night though came in the fourth quarter when senior Jude Barlow returned a kickoff 65 yards for Evangel’s final touchdown and his first career score.

“We have 15 seniors and some of them had big plays that they’ll remember forever. Jude will remember that for a lifetime and that means more to me than anything,” Evangel head coach Tim Smith said after the win. “When he scored, our sideline exploded. Half the team ran out on the field. It makes you realize how much these guys care for each other and love each other. It’s just fun to coach them.”

Whitfield completed the game with 78 yards on 8-of-15 passing, including an 8-yard touchdown pass to Atkins, a 22-yard touchdown to Kyle Jones and an 11-yard TD pass to Christian Chapman.

Atkins rushed for 109 yards on eight carries and two touchdowns, one from 6 yards out in the first quarter and a 66-yard touchdown before halftime.

Lucas Mast was 5-for-6 on extra points.

Jet Turner also scored two points for the Lightning, recording a safety in the second quarter. He had three tackles, one for a loss and a sack. Everson Jones led ECS with four tackles and a fumble recovery, which he returned 22 yards to help set up a Lightning touchdown. Zach Chandler had two tackles, two sacks and a forced fumble.

ECS (9-2) will travel to Ezekiel Academy in Wetumpka on Nov. 5 for the 8-man state championship game. Smith said the team has been looking forward to its chance to meet the Knights again after a 41-30 loss Oct. 1.

“They beat us two of the last three times and it should be a good one. It’s two evenly matched teams and either one of us can win it,” Smith said. “The team who wins it will be the team with the most big plays because we’re both big-play teams. The key for us is we have to shut down their big plays and make them drive it, but they have the home field advantage.”