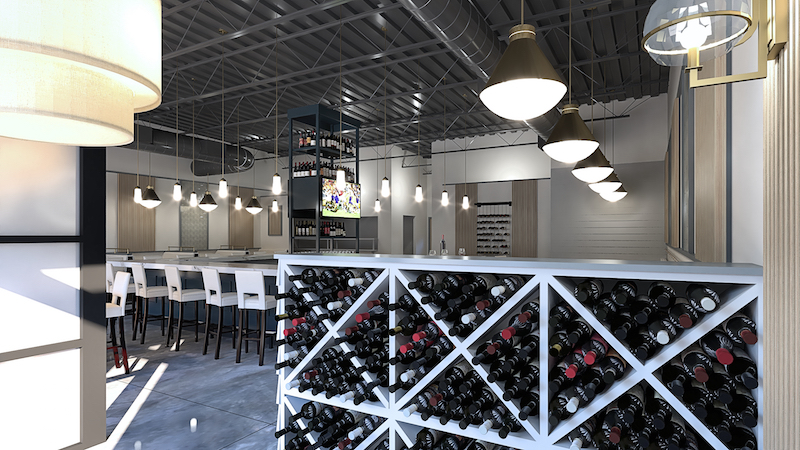 This rendering shows the interior layout of Oak House, a new restaurant set to open in December in the Dunnavant Square development off Dunnavant Valley Road. (Contributed/RLS Design Group)

MT LAUREL – Travis Grappo’s roots in the restaurant industry run deep—as deep as the roots of an oak tree, you might say.

The Mt Laurel resident has opened more than 50 restaurants in his career, which spans multiple decades and states. But this year, Grappo is preparing for a new venture: founding a restaurant of his own.

He and his wife, Sarah, had discussed the idea at length, and when one of Travis’s friends told him a space was available next to OHenry’s Coffees in the new Dunnavant Square development near their neighborhood, Travis saw an opportunity.

“He put me in touch with the landlord, who is now my business partner,” Travis said. “We immediately hit it off. I told him I wanted to do an upscale-casual restaurant, dinner only, with contemporary American fare. That’s how it all started.”

After his meeting with Bill Thornton this summer, Travis started thinking about who he wanted to bring on board as his “culinary expert.”

The first name that came to mind was Oliver Robinson, who served as chef at Fleming’s Prime Steakhouse and Wine Bar when Travis was the restaurant’s part-owner.

“We were business partners, but also great friends,” Travis said. “There was no other choice but Oliver. He’s phenomenal.”

Robinson accepted the offer, becoming another partner in the business.

“Life is all about relationships,” Travis said. “My wife and I were able to found our own restaurant and bring on two amazing partners in the process. We’re all family, and we’re looking forward to moving this thing along.”

Next on the to-do list was designing and constructing the interior of the nearly 2,300-square-foot restaurant.

That’s where his wife’s talents have shined, according to Travis.

“Sarah has knocked it out of park with the interior of the restaurant,” he said. “She has outdone herself with making this restaurant look amazing.”

She chose Sherwin-Williams Web Gray paint color for the walls and modern pendant lights to create a clean, contemporary look.

The focal point of the space will be the bar, which will represent a fourth of the restaurant’s seating.

A chef’s table will seat up to eight people, and a community table will accommodate as many as 10.

With a top-notch team in place and construction underway, Travis and Sarah just needed a name for the restaurant—something that would encapsulate everything they envision it to become.

“It’s all in a name,” Travis said. “Picking the name was the hardest thing I’ve ever done.”

They took cues from the surrounding area, particularly Oak Mountain State Park and Double Oak Mountain, where they spend much of their free time running the trails.

“We knew it had to be something with ‘oak’ in it to represent the area,” Travis said. “We went back and forth with friends and family focus groups.”

During Travis’s first meeting with the restaurant’s marketing team at Lot 22 Media, the owner’s son, Gordie Stewart, mentioned “Oak House” as they were talking through name ideas.

Travis initially dismissed it, but later, local resident and close friend David Brush’s description of the name solidified it as the perfect choice: “Oak House resonates strength, permanence, time, collector of people and wisdom. It speaks directly to our valley.”

“That put me over the edge,” Travis said. “This is such a tight-knit community. I want this to be the neighborhood’s restaurant.”

And with top-notch food and drinks, he believes it will be just that.

Robinson is spearheading the menu, which will feature a core lineup of steaks, seafood and pasta dishes with daily chef specials.

“He’s all over quality,” Travis said of Robinson. “He’s one person that will never cut corners when it comes to a quality product.”

Diners will also be able to order specialty cocktails and wine from a robust wine list.

The couple is planning to open Oak House in mid-December.

The restaurant will utilize an online system called Tock for reservations, but walk-in patrons will also be accepted.

Oak House will be open for dinner only on Tuesday-Saturday. The restaurant will be closed on Sunday and Monday initially.