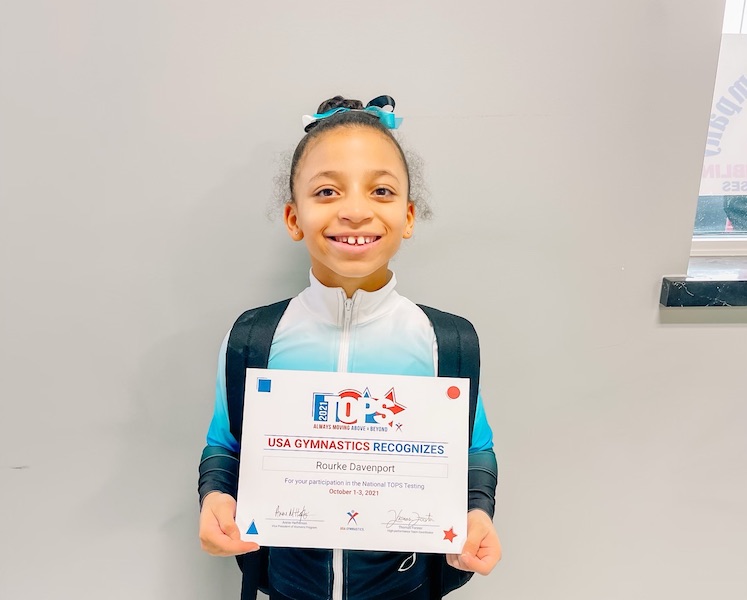 Helena’s Rourke Davenport earned a spot in December’s TOPS National Team Camp, where she will be trained by the best gymnast coaches from all over. (Contributed)

HELENA – In early September 2021, 9 year old Rourke Davenport was placing all of her focus on practicing for the National Talent Opportunity Program (TOPS) gymnastics testing, a path all Olympic gymnasts have gone on in their journey to the top.

Gymnastics has always been second nature to Rourke, taking to it with ease at the young age of 18 months old. Back in September, Rourke was nervous and excited for what the future held for her. Now, her excitement is tenfold as she officially qualified for the TOPS National Team Camp.

Her mother, Robia, was thrilled by Rourke’s achievement, though she admits she wasn’t really expecting it.

“Typically, when she goes to her meets, there are so many talented girls that we run into from all over the country, I was just so sure we would call Nationals an honor and that would be it,” Robia said.

Not only did she qualify for the National Team, Rourke is in the top 10 percent in the country for young gymnasts ages 8-10 years old.

They made the trip to Indianapolis where Rourke went through three days of testing. There, separate groups of 8 year olds, 9 year olds and 10 year olds competed. Ultimately, a culmination of the top 100 across all three age groups is presented in the final list of qualifiers.

The first day, Rourke performed her physical abilities which, according to Robia,  consists of a 30-second hand stand hold, 10 press handstands, 5 cast handstands, 20 leg lifts and an 8 second 12-foot rope climb. The second day she showed off more of her skills.

Robia said through it all, Rourke stayed in the zone.

“At her meets she does get nervous, but when we walked into the National Training Center, she went, ‘You know, for some reason I’m not nervous,’ and she wasn’t,” she said. “She just had her game face on and she was on like I had never seen before. It was like a completely different child was out there and she just rocked it out.”

Next on the agenda are the developmental camps where Rourke will be coached by Nationals coaches from all over.

Robia said Rourke is so excited about the upcoming possibilities, and said this feat has truly helped with Rourke’s confidence level.

“I know this is so validating for her,” she said. “Because with Rourke, she can be consistent, but her last season with competing was pretty rough. It wasn’t her norm, and she was feeling really defeated. I think this reaffirmed some things for her.”

Robia continued that she and Rourke’s dad are “beyond proud” of her and her hard work.

“I feel like it’s safe to say that she is accomplishing more than me and my husband have in our lifetime and probably will continue to do that, so yes, we are so very proud of her,” she said.