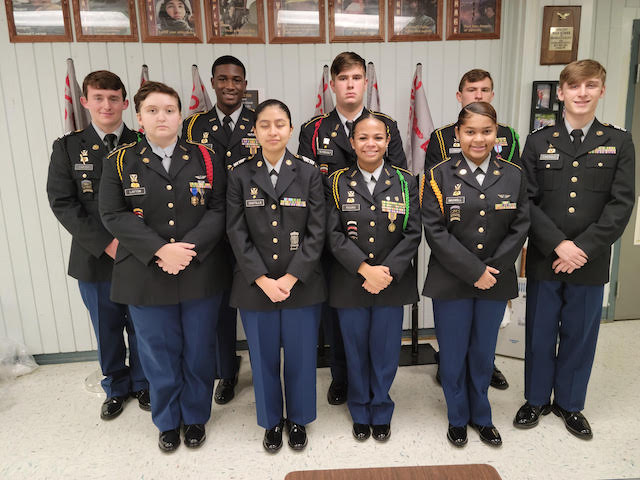 The JROTC program is also popular with students. While it is a requirement for 9th graders, it later becomes an elective, yet many choose to stay engaged.

According to Senior Instructor, Sergeant Major Mary Kyser, “The program is a cooperative effort between the Army and the high school. Our goal is to produce successful students who become successful citizens.”

It is also popular with students. While it is a requirement for 9th graders, it later becomes an elective, yet many choose to stay engaged. Vincent’s new Brigade Commander, Chloe Layton, has been in JROTC for four years and reports that she takes great pride in the roles she has been given. “I am honored to be selected for this position. I will devote myself to progressing the brigade and leaving a positive effect on the program even after I leave,” said Layton.

Cadet Lt. Colonel, Noah Tetreault, promoted to Brigade CEO to Kyser said, “I am truly honored and grateful to be put in this position and to be the right-hand man to CSM Kyser.”

Each year juniors or seniors interested in leadership positions are given the opportunity to interview with a panel to compete for the jobs. Cadets are promoted and selected based on established performance and leadership skills. Continued passion, active support of and participation in the JROTC program with a positive attitude are also required for a cadet to be promoted.

“It is an honor to serve as Command Sergeant Major of the 2nd Battalion,” said Carter Carroll.

Students in the JROTC program are well known around the Vincent community because they often are seen participating in service projects such as volunteering at events like Vincent in the Park hosted by the City of Vincent’s Park Board.

Congratulations to each of the new leaders. You are sure to continue the legacy of excellence associated with the Vincent Middle High School JROTC program.