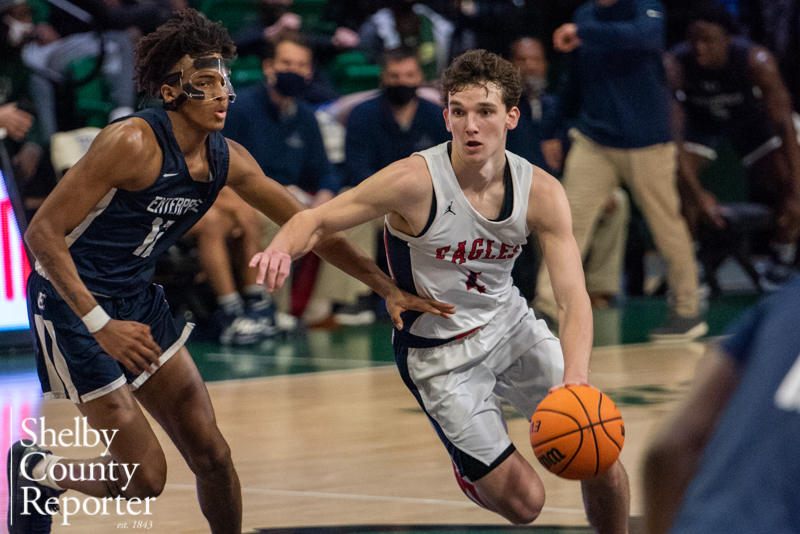 It was a sweet ending. Hoisting the state championship Blue Map trophy in the air, the Oak Mountain Eagles closed the 2020-2021 basketball season with the Class 7A State Championship.

Now, the Eagles enter the 2021-2022 season with a new type of pressure—as defending state champions for the first time in school history.

But with the return of nine seniors and three starters, Oak Mountain seems more than equipped to handle that pressure.

“This is a great group of kids that is all about the team,” head coach Chris Love said. “I’m really proud of how much we have improved as a team, and I’m very encouraged by how our guys have come back and improved as individuals.”

However, not a part of that returning group of starters are Noah Young and Will Shaver.

Both finished last year as All-County First Team players for their production on both ends of the floor.

Shaver was the team’s leading scorer and rebounder with 15 points per game and eight rebounds per game, while he also affected every shot around the rim at 6-foot-11.

A North Carolina commit, Shaver left for IMG Academy at the end of last season in hopes of early enrolling at UNC.

Young, who is now at UNA, was the engine behind last year’s team as a senior leader. He averaged 12 points per game and also posted six rebounds per game with a height of 6-foot-5.

“Going into the season, defense and rebounding the basketball is our biggest focus,” Love said. “Will Shaver and Noah Young are gone. The two leading scorers and rebounds. So we’ll have to find a way to get rebounds and affect shots without their presence.”

The Eagles, however, will get back guards Evan Smith, Wilder Evers and Brady Dunn this season, which all were starters in the Final Four last year.

Smith is a true point guard, who can share the ball and get by defenders, while Evers is a strong shooter and ball handler. Dunn adds a sharp-shooting threat from the outside.

In addition to those three, Ryan Giegel and Matthew Heiberger had to step up in the championship game last year and produced with Dunn out due to an early injury, while Cam Whitaker, Jah’ki Mullen and Cam Atkinson will all play key roles this season as well.

“Most important thing to have is a group that likes each other and works together,” Love said. “They want what’s best for each other. Even if it’s not best for themselves, they’ll put the team ahead of themselves.”

Giegel and Ean Gove are two seniors that will help lead that group in addition to the other returning stars.

“They have both had great summers for us and have really stepped up for the team,” Love said. “They’re two of the best and probably wished they had more minutes at times in the past, but they do whatever is necessary for the team.”

Giegel said that the togetherness of this year’s team is dangerous because the team plays at even higher pace than year’s past.

“It’s basically the same team, playing even faster,” he said. “We’re just excited and focused on getting better every day. We know if we’re all working together, we can have success.”

Oak Mountain will open its bid to repeat on Tuesday, Nov. 16 with a road trip to Ramsay before hosting another Final Four opponent in Spain Park on Friday, Nov. 19.