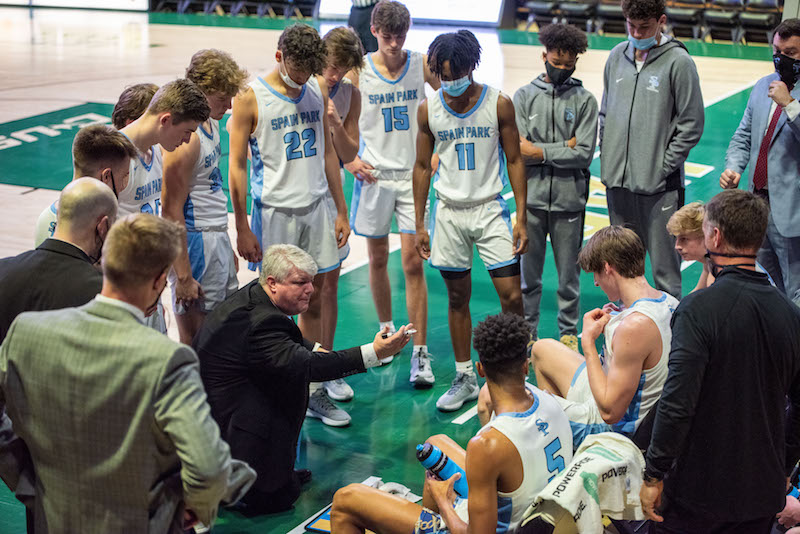 The Spain Park Jaguars will be looking for a repeat trip to the Final Four this season after a special run that saw them come up one-point short in last year’s semifinal matchup. (File)

When Enterprise’s Joshua McCray put in an offensive put back as the buzzer sounded for a 57-56 double-overtime victory in the Final Four last year, the Spain Park Jaguars’ hearts broke.

They had come so close to punching a ticket to the state championship game against county rival Oak Mountain, but they fell that one point short.

The heartbreak, however, is something that is driving this year’s team to be great, especially with younger players expected to step into big roles.

“Last year showed the younger players what it means to fail, which is something everyone needs to learn to handle and push through,” senior point guard Josh Harrington said. “It teaches them it’s OK to fail. But how do you better yourself from that?”

Harrington will be one of the leaders back on this year’s team and one of six seniors on the team.

And it’s a group that learned how to respond from failure now a part of the program for four years, going from 8-24 during the 2018-2019 season to 18-12 two seasons ago and a spot in the Elite Eight and close to 30 wins last year and one point from playing for a state championship.

Now, Harrington, alongside returning senior starter Colin Turner and other seniors, will hope to not only continue showing what it takes to be great, but how to respond from disappointment.

Those characteristics are something that excite head coach Chris Laatsch.

“I’m excited about this group,” Laatsch said. “Obviously last year was a tremendous group that made a special run, but we’ve got some talent and potential from guys that haven’t heard of before.”

Harrington will be a leading returner at guard after averaging 6.8 points, 4.3 assists and 2.7 rebounds per game, while Turner will be one of the best returning post players in the state.

As a junior last year, Turner scored 10.8 points per game and had 5.1 rebounds per game. Now, he hopes he can take it to a new level as one of the go-to players this season.

“I added a lot of strength going into last year, and I’ve built on that again,” he said. “I’m playing more physical now with how much size I have, and I’ve been working on my shot, my outside game. I want to help my team with everything I can.”

And he’ll have to step up in a big way with the Jaguars losing Cam Crawford—last year’s Player of the Year in Shelby County.

Crawford averaged 15.7 points and 5.8 rebounds per game a year ago to help the Jags make their magical run.

But beyond him, Spain Park will also lose key contributors in Blake Floyd and JR Lambert, who each averaged at least 5.6 points per game and were crucial on the defensive end of the floor. In addition to that, Jax Hovanec and Braden DiClemente also provided key minutes and have graduated.

Zach Gray and Pierson Cole are two players expected to step into big roles this year to help fill that gap, while several others are expected to emerge as talented young athletes.

Laatsch added that if the team does struggle early, he hopes that doesn’t ruin their confidence because he sees the potential of the team.

“I think our guys are bought in and hungry, and we have great leaders that will lead them through,” he said. “Are we getting better each and every day? If so, then we’ll reach our potential.”

Laatsch said the Jags will be a similar team this year to last, but he may do some things to coach to this year’s players and their skillsets.

“I think as a high school coach, you coach who you have,” he said. “Keep the parameters the same, but tweak things to the talent. We’ll do some things a little different, but we create a program that flows from the moment they get in it.”

The Jags will open the season on Thursday, Nov. 11 at 4 p.m. against Grissom at Ramsay High School. They will play Oak Mountain on Friday, Nov. 19 at Oak Mountain in a battle of two Final Four teams from last year.