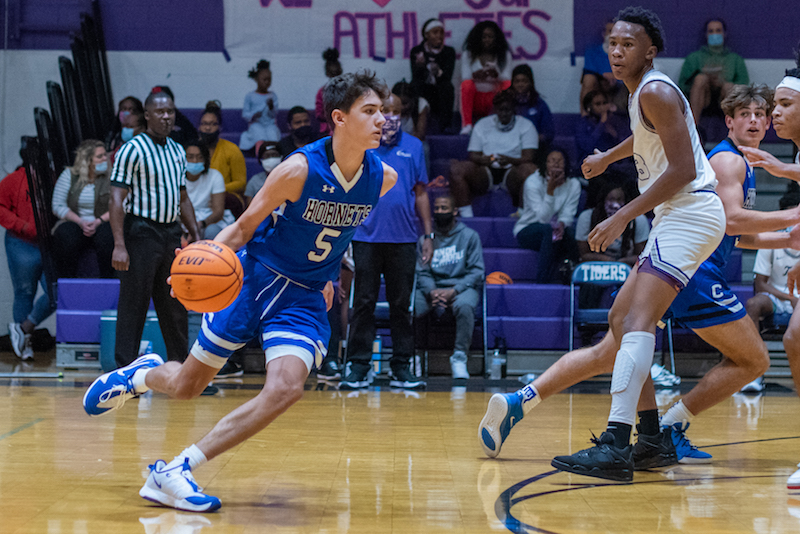 Paul Lanzi, above, led Chelsea in scoring last year at 10.8 points per game and returns this year ready to lead the Hornets to a successful season. (File)

Last season had its share of ups and downs for the Chelsea Hornets on the basketball court, but it was a team that lost 14 games by 12 points or less throughout the season.

It was a group that improved as the season went along, and now has a chip on its shoulder heading into the 2021-2022 season after those tight losses and a two-point loss in double overtime to Homewood in the opening round of the area tournament last year.

“We improved from the first half to the second half of year last year,” head coach Nick Baumbaugh said. “We need to start this year the way we finished last year. We’re really excited because we’ve been working hard in the weight room. Our kids are all bigger, stronger and more physical, and we’ve got a lot of kids getting in the gym and getting up shots.”

It will be a similar situation to last year for the Hornets, who will only have one starter back, but that one returnee is the team’s leading scorer in Paul Lanzi.

“I don’t feel much pressure this year,” Lanzi said of his role. “We have a lot of talent this year that is going to take a lot of pressure off me. I feel like they’ll relieve some pressure off of me to score.”

In addition to him, Avery Futch, Alex Redd, Cooper Griffin, Caden Cook, Carson Camper, Walker Gailey and MJ Conrad and EJ Hudnall will all add guys who can make a difference on the floor.

There closeness is what gives this team something different compared to those in the past.

“This group really enjoys playing together and hanging out,” Baumbaugh said. “This year, it has been fun seeing the guys being in the weight room, in the gym ad having fun with each other.”

That chemistry is what Lanzi said will be important for this year’s team to get over the hump in those close games and have a successful season.

“Our chemistry is for sure the key,” he said. “It has gotten a lot better. It goes along with a lot of young guys that play really well that will step in.”

With that chemistry also comes the best group of playmakers the Hornets have had in several years with young talent ready to step up.

Griffin’s main goal as a senior and likely starter following the football season is to help hold the team accountable as a leader.

“There is a lot more leadership this year overall,” he said. “Younger guys are really stepping up. Senior leadership from me and getting everyone to buy in. I feel like this group embodies what it means to work hard each and every day, which will be key for us every year.”

And for Baumbaugh, it is execution that will be the main key along with the hard work.

“Some of the things we do in practice, we have to execute in games and value the basketball,” he said. “That comes with starting where we finished last year. Statistically we could see it. We hit more shots, took care of the ball better. We have to do that on a daily consistent basis. If we execute, we will be good because we already value our defense and how we play on that side of the ball.”

Griffin added that the team has been focusing on those key areas, while they’re excited to get going.

“These are my boys, and I’m ready to go to work this year,” he said.

Chelsea will open the 2021-2022 season against Brookwood on Nov. 4, while their second game will take place on the road against Vestavia Hills on Thursday, Nov. 11.