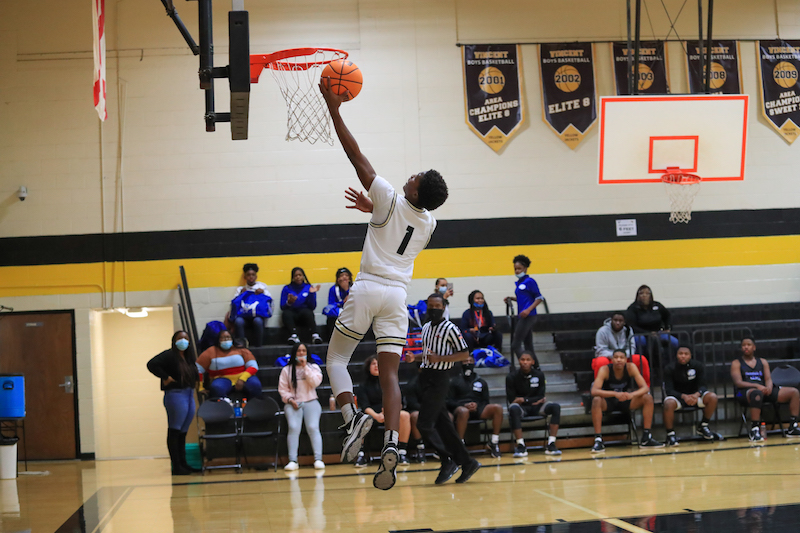 Tray Youngblood, above, will be one of several players back for this year’s Vincent basketball team looking to make it to at least their 16th consecutive sub-regional appearance. (File)

When they hit the floor for the 2021-2022 basketball season, the Vincent Yellow Jackets will hope continue a legacy that dates back the previous 15 years.

That’s how many consecutive years the Jackets have advanced to the sub-regional round of the playoffs.

“Every year is different in a lot of ways, especially in a place like ours where it’s a small school and there is a lot of roster change every year,” head coach John Hadder said. “But we work to the strengths that we have, and we have high expectations on what we want to achieve. We’re excited to get it started.”

Even with the success that last year’s team had by making it to sub-regionals, the Yellow Jackets finished 13-16 overall and struggled to find consistency.

“For us, last year was a perfect storm in a bad way,” Hadder said. “We lost four guys going into the year from a team that lost three games and didn’t have much of a summer with a new roster due to COVID.”

That limited the growth of a team full of new faces. But this year, Hadder and the players are looking forward to a more normal year and the hope of what can come from that.

This year’s team will return several key leaders not only with experience but now with a full offseason of preparation after several started as sophomores last year.

Three of those young playmakers, who are now juniors, include Blake Allums, TyQun Goodman and Tray Youngblood.

Allums made 65 3-pointers last year and will look to be a leader from the guard position bringing back 9.1 points per game, while Goodman finished second on the team in scoring with 10.4 points per game and led the team with 8.7 rebounds per game.

Youngblood also adds one of the school’s most athletic players to the floor each game.

“I’m counting on these guys to play big roles this year,” Hadder said. “Blake is a guy who can really score with the ball, shoots well and understands the game, while Tray is one of the better athletes. He is really quick and great defensively.”

Last year was the first time they played varsity basketball, and now Hadder is hoping that with their experience, they’ll be able to step up as leaders this season.

“They never really were in that situation before to have to set that example and pull everyone along, but this year, that’s what I’m looking for from them,” he said.

But the expectation doesn’t change with basically three starters back this season.

“We just try to play to a standard that we set. I hope our guys take pride in that. It’s something over the years that we’ve really had a level of expectation,” Hadder said. “I hope our guys don’t feel burdened by that but understand that’s the level we play to every year.”

Both are taking the task of being leaders to heart, knowing they have to live up to the legacy that has been set for 15 years.

Hadder said his main goal for this year’s team is to establish the ground work of being a tough and gritty team defensively. He said that is something the team didn’t do well enough last year, and if they do improve, the offense is going to be better, which should lead to success.

Week 6 predictions: Briarwood, Helena set for Game of the Week; others jump back into region play