‘An impactful journey:’ OMHS Teacher of the Year reflects on career

NORTH SHELBY – Oak Mountain High School teacher Vicki Jackson developed a love of reading at an early age, but the opposite was true for her in mathematics.

“Math was never my thing,” Jackson said. “I struggled in math and didn’t enjoy it. I would hide my papers and my report cards from my parents.” 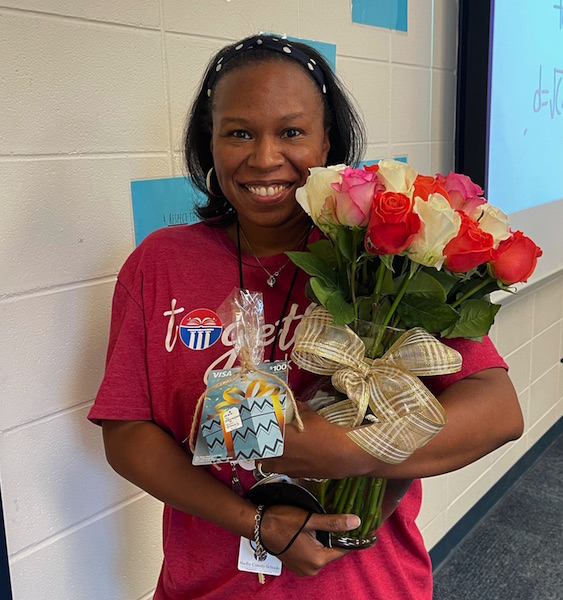 Vicki Jackson received flowers and a gift card for being chosen as Oak Mountain High School’s Teacher of the Year for 2021-2022. (Contributed)

Ironically, Jackson teaches geometry and Algebra I at OMHS now, and she is great at her job—so great that she was named the OMHS Teacher of the Year for 2021-2022.

Jackson credits one of her high school math teachers, Dr. Marion Miles, with helping her overcome her problems and ultimately starting Jackson on a path to having the same impact on students.

“She would meet with me in the morning before school or after school,” Jackson said of Miles. “She saw I would understand to a certain point. She recognized some of the gaps I was having, and she tutored me.”

Jackson said Miles saw something she didn’t see in herself; she saw the potential for success given enough time and effort.

“It was such an impactful journey, how I got here,” Jackson said. “(Math) was my strongest subject when I left high school. That’s really how it started. I would love to do this for someone else.”

Jackson earned her undergraduate degree in secondary education with a concentration in mathematics from the University of Montevallo.

While working on her graduate degree at UM, she suffered a stroke and took some time off to recover.

“I had to do physical therapy, occupational therapy and speech therapy,” she said. “I was still very strong in anything analytical. My neurologist was dumbfounded. That part of my brain was very strong; I just had to work a little harder.”

Jackson taught at Oak Mountain Middle School for 15 years before transitioning to OMHS, where she is in her third year.

Jackson sponsors the Algebra I Math Team, as well as a mentoring group she helped launch in 2019 called the Young Women’s Club.

“We meet during our SOAR 60 period twice a month,” she said of the club. “It is a time for girls to come together to empower and encourage each other.”

The club invites speakers from various organizations to speak to members about topics such as college, careers, community service, leadership and setting goals.

For Jackson, the club is in line with the rapport she tries to establish with her students in class.

“It’s so important to know who you’re teaching and know who they are outside of the classroom,” she said. “That relationship goes a long way. Building trust and respect – I think that is the biggest thing.”

Jackson said she likes that no two days are the same in her job.

“I enjoy the excitement and being around students,” Jackson said, and added, “I have the best colleagues. I’m just at a great place and a great community as well.”

When she found out she had been voted Teacher of the Year, Jackson said she was shocked.

“Just to think someone thinks very highly of me and values what I do, I’m very honored by that and very humbled,” she said.

Jackson doesn’t just want her students to succeed in academics; she wants them to leave high school with attributes like resilience and perseverance—life skills they will need no matter what career they pursue.

“They will forget quadratic formulas, but in the real world, what are those life skills that you need to have to be successful, to be a team player,” Jackson said. “Learning how to work hard and go after what you want.”