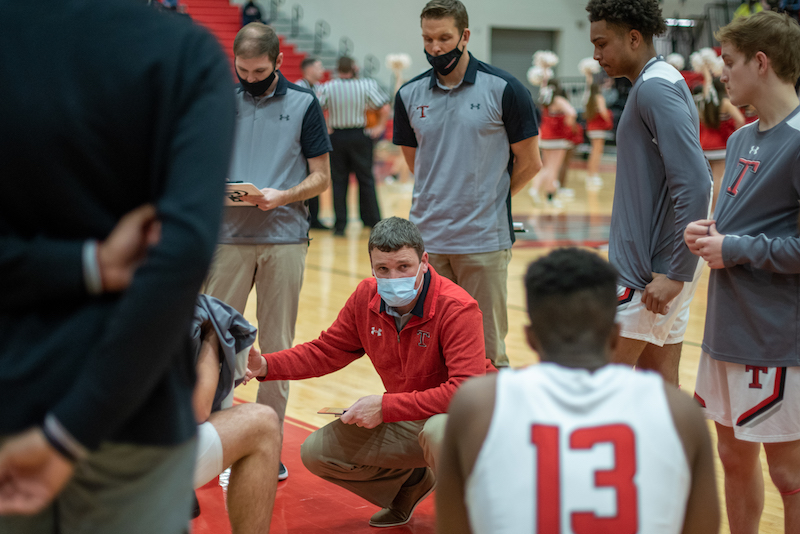 Thompson’s boys basketball team will be loaded with new faces, but the Warriors have a tight-knit group ready to make a splash in a difficult area. (File)

Dru Powell enters his fourth year at the helm for the Thompson boys basketball program and will be coaching a team that looks different from the one he inherited when he arrived in 2018.

Fully settled into the area, he’s eager to start up the new season and see what his new group can do on the court.

“We are really excited to be back in season, had a good summer and played well together in June and July,” he said. “We’ve got a very different group. We’ve only got three guys back from last year’s varsity, so we’re excited about some new faces and ready to get going.”

Powell will have a good nucleus of players that also will have been playing with each other through football season with many of the team’s major contributors being basketball-only.

“We’ve got a lot of our guys already rolling with the program, practicing, working out and ready to play,” he said.

The Warriors will have more height on the roster than in the past, but in an era of positionless basketball, Powell emphasized that his team will do what it takes to be successful and do it by committee.

“This is the type of group and the type of players where if you need a two man to guard a five man, that’s what he’s going to do to help our team win,” Powell said. “We’ve got some decent size in there, and I think that collection of guys will be good enough.”

Seniors Wesley Roberson and Landen Lawrence are part of a four-man senior class that is excited to leave a mark on the program.

When asked what it will take to have the team ready for the year, the guys were concise and to the point.

“Keep working, keep growing closer and building that chemistry and, at the end of the day, it comes down to trust. We have to trust each other to make that play,” Roberson said.

Lawrence added that showing up every day and making practices intense, while holding everyone accountable would be key as well.

Thompson sits in a highly competitive Area 5 that includes Oak Mountain, the reigning state champs. Powell knows his club will have to focus on improvements made within their own locker room to be successful.

“Our area is very strong, it’s been strong and I feel like it’s going to continue to be strong,” Powell said. “All three of those teams can beat you and win a state championship, and that’s what Oak Mountain did last year…so it’s a really strong area and we’re excited to compete against the best.”

Thompson basketball has been playing pressure defense and airing it out from long range in recent years, and that will likely continue if not go up a notch this year.

“We’ve got a lot of green lights, we’ve all got green lights actually,” Powell said, smiling as he looked to his players on either side. “We’re all going to shoot it.”

There’s a sense of opportunity in a new season of challenges and a new group of Warriors looking to prove themselves.