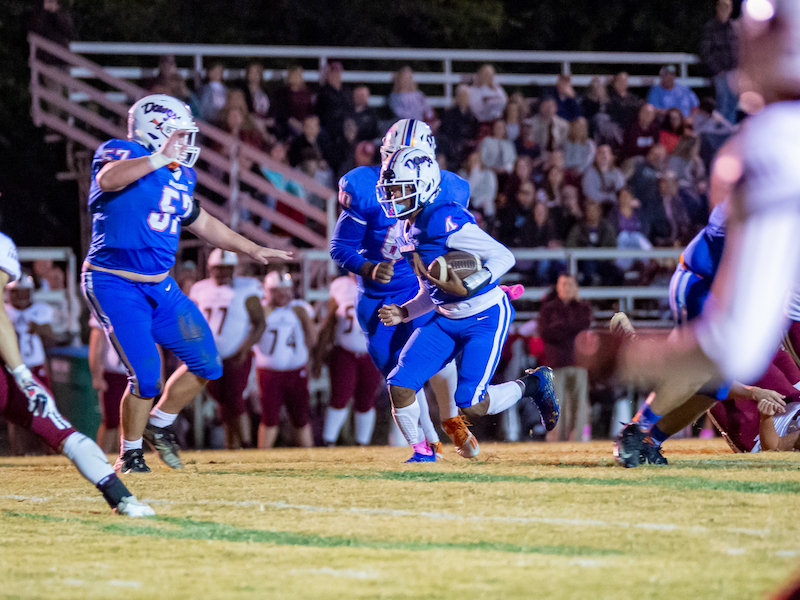 Montevallo trailed by just one point in the third quarter, but the Bulldogs couldn't close the game in an opening-round loss to Jackson on Friday, Nov. 5. (File)

JACKSON – Montevallo’s season came to an end with a 44-20 loss at Jackson on Friday, Nov. 5, in the first round of the Class 4A state playoffs.

The Bulldogs (8-3) fought back from a 14-0 halftime deficit and pulled to within one point of the Aggies (9-2) in the third quarter, but the hosts outscored MHS 30-7 the rest of the way to pull away with the win.

Jackson scored first in the game on a 3-yard pass with 4:55 remaining in the first quarter. The Aggies made it 14-0 1:44 before halftime on a 5-yard pass.

Montevallo scored on a 20-yard run by Kial Cottingham with 5:26 on the clock in the third quarter.

Then a 9-yard Cottingham run gave the Bulldogs a chance to tie the game with 2:17 to go in the third, but the point-after attempt was blocked and Jackson held onto the lead.

The Aggies returned the ensuing kickoff 85 yards for a touchdown, and added a 1-yard rushing touchdown about 3 minutes into the final quarter for a 30-13 lead.

Montevallo’s Joseph Anderson scored on a 19-yard rush with about 7 minutes left in the game, but Jackson scored the games’s last two touchdowns on running plays.