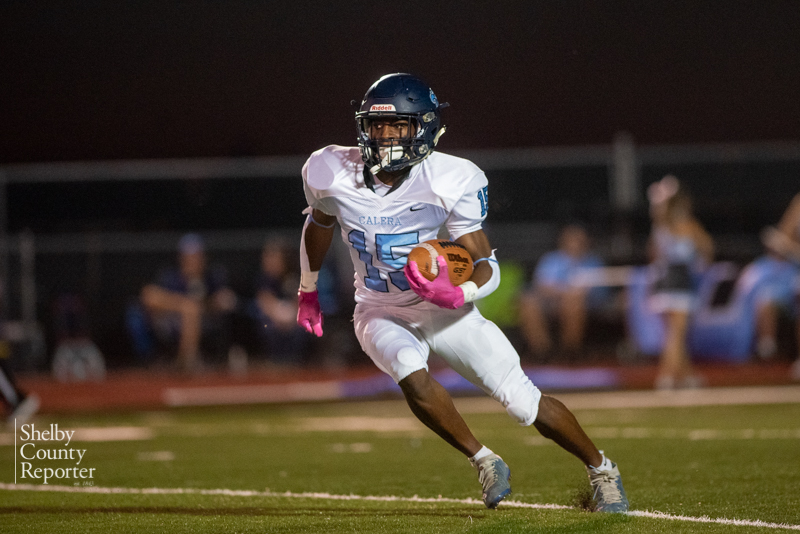 SPANISH FORT – The 2021 football season didn’t end the way the Calera Eagles wanted it to, but it ended in the first round of the playoffs with a tight loss to No. 4 Spanish Fort—setting a new standard for the future.

Coming into the season, the Eagles had won just one head-to-head game each of the last three seasons, hadn’t won a home game since 2017 and hadn’t been to the playoffs since joining the 6A classification.

All of that changed during year one under head coach Jason Hamlin, and the 41-31 loss to the Toros to end the season didn’t change that.

The Eagles finished the season 7-4 overall, went 6-0 on their home field and went toe-to-toe with a team that competed for the 6A state championship the year before in their first playoff game in Class 6A.

A team that had nothing to lose, Calera played like it on Friday night.

The Eagles quickly fell into a 14-0 hole in less than five minutes, and they could have easily said ‘We’re outmatched,’ and folded up shop.

But the change in culture at Calera was then put on display with the fight shown after that.

Braylyn Farrington’s big kickoff return set up a 5-yard touchdown pass from Preston Stokes to Matthew Windham to cut the deficit to 14-7 with 5:17 left in the opening quarter.

That duo connected again shortly after, this time on a 7-yard touchdown pass to even the game at 14-14 going to the second quarter.

Spanish Fort, however, responded with a big stretch.

Calera was able to get back down the field in the final 1:39 to add three points on a 29-yard field goal from TJ Hernandez to create a 27-17 game at the half.

Then, out of the locker room, the Eagles put together one of the most exciting plays of the night on the legs of Wesley Head. The athlete for Calera took the opening kickoff to the second half 72 yards to the house for a touchdown to all of a sudden make it a three-point game.

But Spanish Fort answered once again, like it had twice in the game already, with two consecutive touchdowns.

Calera didn’t get another chance from there, as time ended up not being on their side following Spanish Fort’s late push.

Kobe Prentice finished his final game with 143 receiving yards on 11 receptions, while Windham had three touchdowns and 32 receiving yards. Chris Cotton ran the ball 12 times for 49 yards, while Stokes closed his night with a 21-for-34 performance featuring 251 yards and two touchdowns. Farrington added 67 yards receiving on six catches.

Defensively, the Eagles were led by CJ Richardson with eight tackles, including one for loss, while Mason Green and Julius Marsh added eight and seven, respectively.

The season came to an end for the Eagles with the loss, but the shift into the future could be felt.

The change in the program was no more evident than the parade send off for the team on their way to Spanish Fort, and even more so, the crowd that made the lengthy trip to fill the visitor’s section of the stadium.

Now, the stage is set for a bright future for the Calera football program with expectations firmly in place to not only get to the playoffs, but compete for a championship.