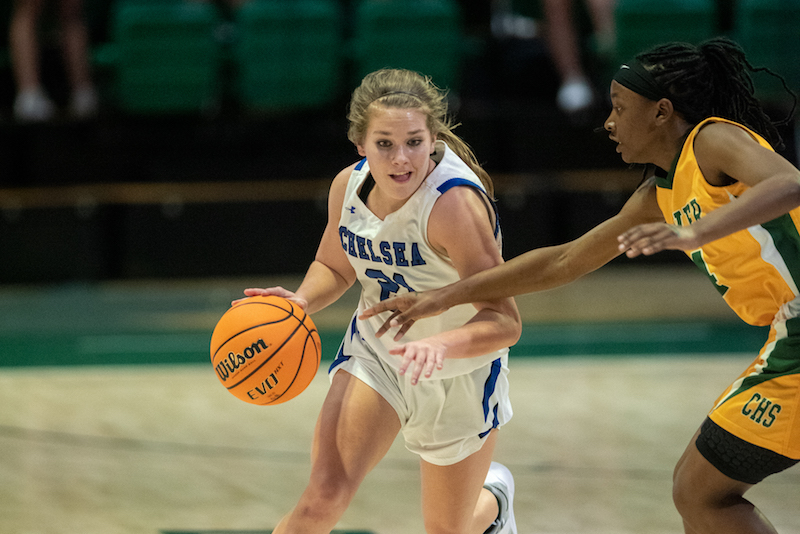 How do you follow a historic trip to the Final Four? Well, by going even further the next year, of course.

That is the goal of the Chelsea Hornets this season coming off their first Final Four appearance in school history last year.

This year’s team, however, will have some tough shoes to fill with the loss of a few key seniors, including Ellen Fleming and Mackenzie Titus, but they have five seniors back ready to take the program to a championship this season.

“We have five seniors in the program,” head coach Jason Harlow said. “They have a tough act to follow because that program last year was good, but we still have a quality basketball team. Five seniors is unique. It’s my fourth year in the program, so I’m the only varsity coach they’ve had.”

The Hornets did take a hit during the summer with the loss of junior Sophia Brown to a knee injury. As a sophomore, she earned a spot on the All-County team after averaging 8.4 points and 5.1 rebounds per game.

But others are ready to step up.

Sydney Schwallie returns to lead at the point guard position after averaging 8.1 points, 3.1 rebounds and 2.8 assists per game last year with 59 steals and 38 made 3-pointers.

She has also been a key contributor for three years now.

The Hornets will also get back Mary Cartee, who can play several positions, and will likely be needed a lot in the post with Brown out. Cartee put together an impressive junior season and is expected to have an even bigger role this season.

Beyond those two, Lexi Redd, Nia Cummings and Madison Moore are all expected to make big impacts as scoring threats and strong defenders as well.

The starting back court will include Schwallie, Cartee, Ashlee Washington and Cummings, and all of them have experience in the lineup.

“They have the character to bring this team together,” Harlow said. “I have memories from last year that will last a lifetime, but that’s something we have to put in the rearview. Everybody is 0-0 this year. We have a strong junior class that we feel like will step up.”

Several of those players were part of a junior varsity team that went 15-2 last year, setting the stage for their jump to the varsity squad this year.

“We know there will be speed bumps the first couple of months, growing pains, but we have to stay the course and continue working,” Harlow said. “If we do the things we did the last couple of years, then we’ll be in good shape come January.”

And the Hornets are off to a solid start already as one of the first teams to open their season.

In their opener, they were able to easily pull away for a 63-31 victory to start the season 1-0. Schwallie led the team with 17 points, while Cummings added 13 and Redd had 11.