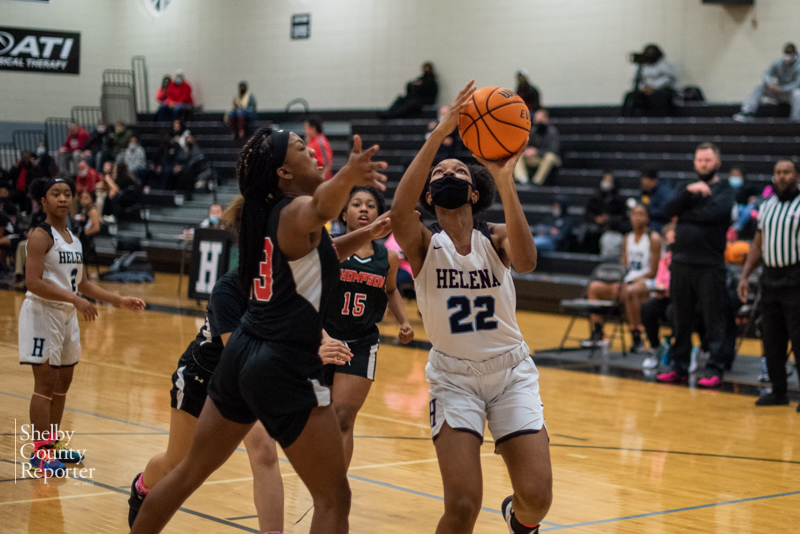 Helena’s Alana Scott, above, will be one of the team’s leaders this season, as the Huskies look to make a special run. (File)

The Helena girls basketball team fell seven points short of advancing to the Sweet 16 during the 2020-2021 season, which left the Huskies looking back on their mistakes.

That, however, has carried into the lead up to the 2021-2022 season, with a major focus on the little details that cost them in several games, including the opening round of the playoffs.

“When I was at Hoover, Scott Ware said something one time, probably in passing, that stuck with me. As coaches, the game and stuff like that is always going to matter more to us than to the players. But last year, I saw a lot more kids just honestly mad about our playoff loss because we knew there were a lot of mistakes we made in that game that were just little dumb focus things,” Helena head coach Alan Skinner said. “If I had a dollar for every time I talked about focus in practice. Looking back at last season, a lot of our worst defeats in terms of how that loss felt, the ones that were the hardest to sit with, were the ones that were the little detail things making the biggest difference.”

The Huskies will lose the senior trio of Kya Gardner, Montana Harris and Jessica Powell, who were three of the team’s leaders the last couple of years.

Harris, a member of the All-County First Team last year, was the team’s leading scorer at 13.4 points per game, while she also added 6.2 rebounds per game.

Replacing that production will be difficult, but the Huskies do return leaders in Kennedi Nobles and Alana Scott, while other new faces are expected to emerge to make this possibly one of Skinner’s best teams.

All of the players also share in the sentiment that Skinner was preaching about focusing on the small details that were costly during a heartbreaking end to last season.

“He says focus about a thousand times in practice,” Scott said with a laugh. “When it comes to games, those losses last year were little mistakes. The way we practice now is kind of reflecting that. Practice is hard. We work hard. We practice different drills and plays all the time so that when we get to the games, we don’t make those same mistakes.”

Nobles, who handles the point guard position, averaged 7.8 points and three assists per game last season, which will make her a key part of the team on both ends of the floor this season.

That’s a role she has taken to heart leading into the year by pushing the team to focus in practice.

“Our focus is a lot better,” she said. “The way the season ended last year didn’t go well, and those little things can make a difference.”

Skinner said the team won’t lack leadership this season, and it is a group of players that has intangibles and strong focus, which has him feeling good about this year’s team reaching their goals.

“We always have expectations that we want to win our area and get in the playoffs and it will balance out from there,” he said. “I don’t want them focused on one or two games in the middle of January, but to find something every day that they can get better at.”

What has Skinner feeling most confident, however, is the attention to detail this year’s team has.

“It has been leaps and bounds improved from the situations we had last year and in the different practice situations we go through,” he said. “You don’t want to waste a failure and forget how it feels. We drove all the way to Wetumpka, and a couple of missed defensive rotations ended up sealing the game. You remember how that feels and it kind of sticks with you.”

As for the style of play, the Huskies are expected to shift back to more of a press defense, while the both ends of the court will focus on the added length that his year’s team has, which should help stretch the floor.

Helena will open the new season on Thursday, Nov. 11 against Fultondale high school.