Oak Mountain ready to take next step during 2021-2022 season 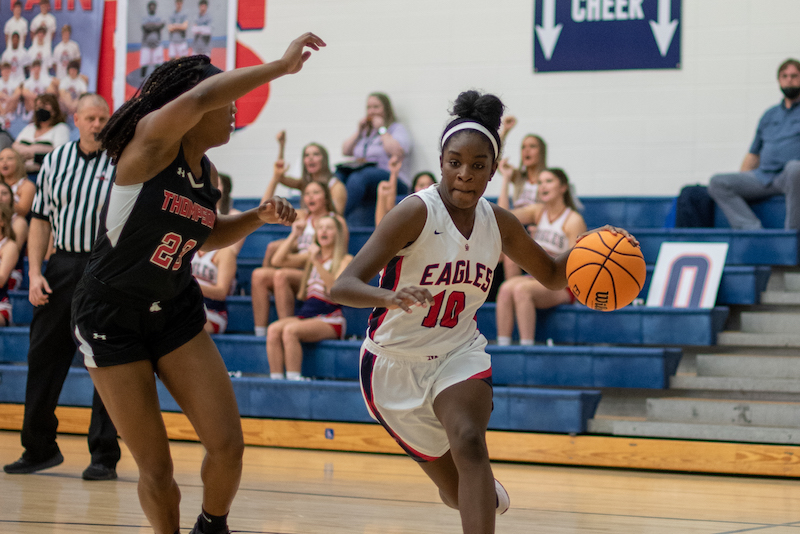 Raegan Whitaker, still a sophomore, will be one of Oak Mountain’s top producers this season along with several others, including All-County player Charity Shaw. (File)

Last year, the Oak Mountain girls basketball team punched its ticket to the Sweet 16 to complete redemption from a heartbreaking end the year before. This season, the Eagles hope to take it a step further.

Falling to Austin in a tight 36-28 game in the Sweet 16 last year, they saw just how close they were to being an Elite Eight team, which has this yea’rs group hungry.

“They’re determined,” head coach Beth Parmer said. “Last year didn’t end like they wanted it to. We felt like they should have gone further. They think that now. They feel they can. They have a little bit of a chip on their shoulders. I don’t know that we’ve ever gone to the Elite Eight, but this group wants to do that, and I think they can.”

With the return of All-County player Charity Shaw, as well as starters such as Raegan Whitaker and Abby Gordon, the Eagles feel confident in their ability heading into this season.

Shaw averaged 9.1 points per game to lead the team last year, but just as important, she averaged seven rebounds and 47 steals per game as well.

Now, Shaw is looked at as a senior leader for the Eagles, who wants to be the best player on the floor, while also leading the team.

“In practice, if I see one of my teammates doing better, I want to try harder and I tell myself, ‘I want to play as good as her and do better,’” she said.

Her goal is for that to carry over to the rest of the team to create a competitive edge that each player try to be the best player on the floor.

With that and with one goal in mind, the team’s chemistry is the best it has been in years

“We like to push each other and have fun together,” Gordon said. “We all want to go to the Elite Eight, so we’re working together to do that.”

“She is one of our outside threats,” Parmer said. “I’ve been challenging her to be more aggressive going to the basket. She’s made great strides this summer.”

Her outside shooting, however, is a perfect complement to Shaw inside and Whitaker’s ability to drive.

Whitaker returns for her sophomore year after averaging 7.3 points and 7.2 rebounds per game, leading the team on the glass.

Her presence, along with a talented Tamia Threatt and a rising young player in Lauren Schuessler, makes this year’s team a balanced and dangerous one. You can also add in Victoria Hood and a few others who will contribute heavily this season.

“I’m excited to see what this group can do,” Parmer said. “When they just get out and play, they have fun. They act goofy, which sometimes gets on my nerves, but they have fun together and enjoy playing together. They’re ready. I think we’re almost there.”

The Eagles will lack a little bit of height this season, but it’s a team that will make up for that with speed.

The quickness at every position is as good as it has been in a while, which will lead to them pushing teams offensively and pressing teams defensively.

“We want to be the kind of team where a team goes, ‘Oh gosh, we have to play Oak Mountain.’ Instead of ‘Oh, it’s just Oak Mountain,’” Parmer said. “You may beat us, but you’re going to feel it. We’re going to pressure you defensively and make sure teams know our presence.”

Oak Mountain opened the season with a 64-36 loss to Mortimer Jordan on Nov. 4 and will face a challenging schedule, but the Eagles hope it pays off again once area play arrives.