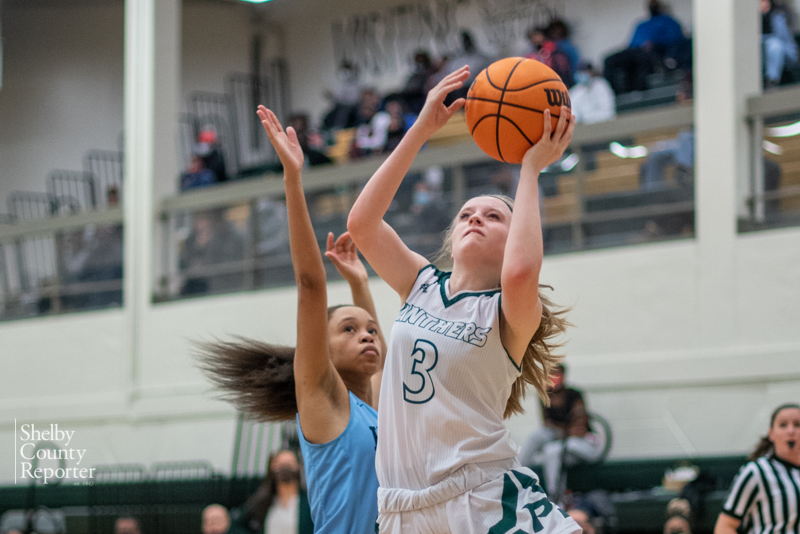 Laci Gogan will return to Pelham this year as the reining Player of the Year and the county’s leading scorer a season ago. (File)

There may not be a team with more excitement surrounding it than the Pelham girls basketball team heading into the 2021-2022 season.

The Panthers return their top two guards off an appearance in the Sweet 16 last year for the first time in school history.

They went on to lose to McGill-Toolen 48-32, but the Yellow Jackets went on to the Final Four.

Now, the Panthers are out for a run toward a Final Four appearance themselves.

“Going into this season, we have six seniors,” head coach Crosby Morrison said. “This is the senior group I came in with, my first group. I’m really excited to see their legacy continue. I’m looking to build on what we did last year with great senior leadership. Hopefully we have a successful season all around.”

One of those returning seniors will be Tate, who finished last year averaging 11.7 points and 7.8 rebounds per game. That has her feeling confident for what is ahead this season.

“I think the confidence level is very high,” Tate said. “Building off our success, it motivates me and my teammates to keep going hard every day in practice just to work more toward our goals.”

The teamwork is also part of the key to success for the Panthers as well.

When she took over the job four years ago, Morrison created the theme of #BetterTogether. Now that this group has been with her for four years, she thinks they are the definition of what she was hoping for when she created that.

“It’s a credit to them buying in every day. Coming in, we had to change the culture and the thought process,” Morrison said. “This group has continued to improve and buy in every year. Building on last year, we’re going to use that, but we’re not done yet.”

And one of those who has taken to that and is basically like another senior is Gogan, who is going into her fourth year playing as a junior. Playing with the team since eighth grade, she averaged 19.1 points, 3.1 assists and 2.8 rebounds per game last year to earn the county’s Player of the Year award.

“She is a great player for us, but more importantly, she’s a great teammate,” Morrison said. “She’s like another senior with this group. They love her and she loves them. We know she can score, but she’s been working hard on improving the defense.”

Morrison went on to mention the defense of Tate and fellow senior Victoria West as to who Gogan wants to match up to as well as the rest of the team.

“They’re going to bring defense,” Morrison said. “So if you’re going to be on the floor with them, you have to bring that energy. They play well with each other and well off of each other.”

With a strong senior class of six players and a close group of young players alongside them, the chemistry is there for this to be a special year.

“We’ve spent a lot of time together the last four years,” West said. “Even the young ones. We’ve gotten to know each other very well, and that has built a lot of trust.”

That has also led to a lot of depth with 10 players competing every day in practice for minutes in the game.

With that depth, the Panthers will continue to press teams and create chaos defensively, while pushing the ball in transition with speedy and experienced guards.