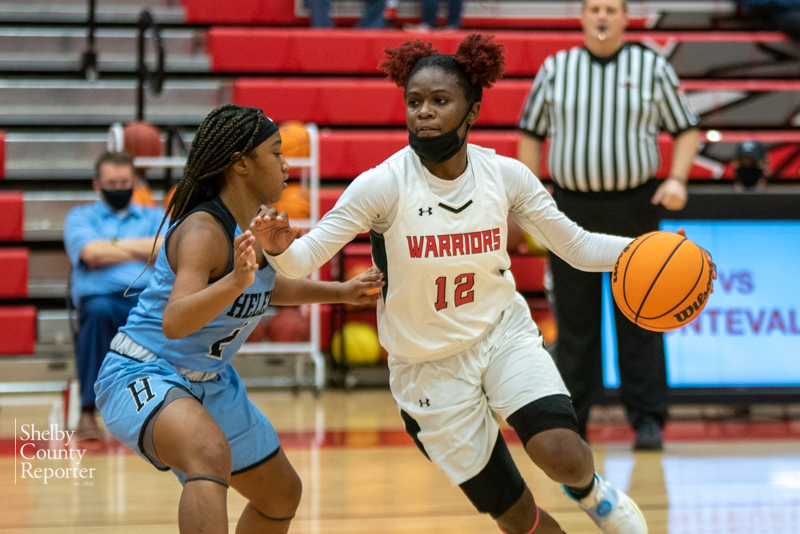 Thompson’s Alecia Reasor, above, was the leading scorer for the Warriors last year and will return hoping to lead the team to a Sweet 16 this season. (File)

If year two under Marty Smith was any indication as to the direction the Thompson girls’ basketball program is heading, then year three should be a lot of fun to watch.

The Warriors are down two starters from last year, but Smith returns much of his squad, including leading scorer Alecia Reasor, who averaged 13.1 points per game last year.

“We’ve got a good nucleus returning this year. The girls who have come back have stepped up, and we’ve got nine players returning who saw varsity action last year,” Smith said. “The bottom line for this team is we have to find a way to be mentally tough and win some games on the road.”

Thompson will head into some hostile enemy territory this season, but the veteran coach of nearly 30 years knows there’s only a few ways to grow, improve and get over that hump as a team. If the Warriors can win their first area tournament game and grab a seed at regionals, then anything is possible.

“I tell people all the time, the best team doesn’t always win the state championship,” Smith said. “It’s the team that catches the right breaks at the right time and reaches their potential at the right time—but you have to get there. Our key is to get to the regional in order to move this program forward to where we want to be.”

Smith’s philosophy of “32 minutes of chaos” hasn’t changed, and after two years, his team has adjusted well to his practices, which feature a difficult pace similar to that of their games.

“The tempo that we’re practicing at now is very encouraging, it’s exciting, it’s fun and it’s demanding,” he said, as his players nodded their heads in agreement. “It’s challenging because there’s no time off just like there is in a game. You can’t take a play off.”

As schedules and interactions between the students begin to normalize, the coaching staff has been able to combine practices, and the girls team has been able to improve while playing against the freshman boys team.

Playing against taller, more athletic competition should give the girls an edge heading into the season.

“The boys’ freshman team has given us some excellent looks,” Smith said. “Being able to practice against that speed is great, and we’ve seen growth in both programs as a result. A lot of high school programs don’t have that luxury.”

With the departures Lindsey Cook and Malaysia Samuel, Reasor will inherit most of the scoring load by far, but she has confidence in her teammates to help her put the ball in the hoop.

“(Natalie) French is definitely an up-and-coming player for us,” Reasor said. “She’s in the post, and she’s grown a lot from last year. Practicing with her, I can see her get better and better every day, and I feel like she’s going to be a keys this year. “Also, our point guard (Zyon Gaiters), she’s going to be captain this year and ball out so we’ll be OK.”

Gaiters is typically the point guard and main ball handler for the Warriors, but the junior who has started every game of her career at Thompson, said she has been working hard on her shot as well.

“That was one of my main goals this year was to get more confident shooting the ball,” she said. “Over the summer I’ve been working on it and sometimes Alecia might get moved to the point guard spot and I’ll move over to shooting guard so I can shoot the ball more like I know I can.”

Thompson has a tight-knit, athletic group that seems on the precipice of the playoffs.

They begin their season Tuesday, Nov. 9 at Northridge with tipoff scheduled for 6 p.m.