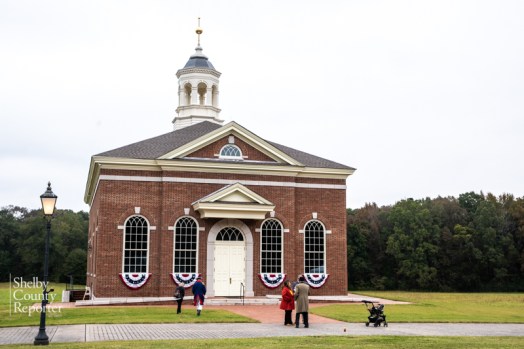 The American Village in Montevallo held a dedication ceremony on Thursday, Nov. 4 for the grand opening of the West Wing of Independence Hall, the first phase of an ongoing project to build a complete replica of Independence Hall before the country’s 250th birthday. (Reporter Photos/Keith McCoy and Daniel Holmes) 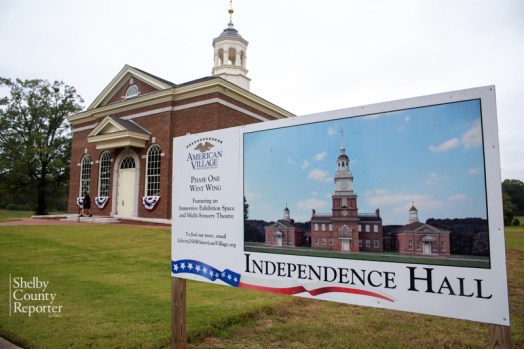 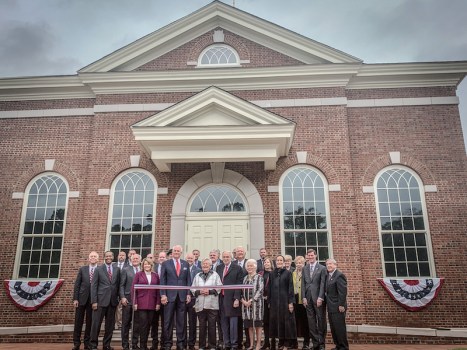 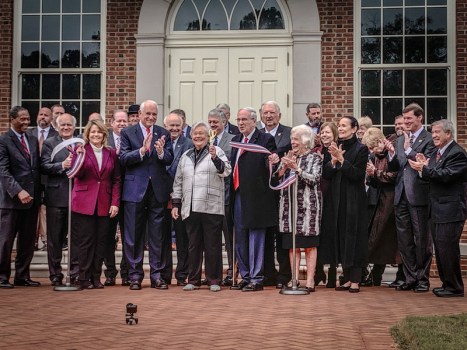 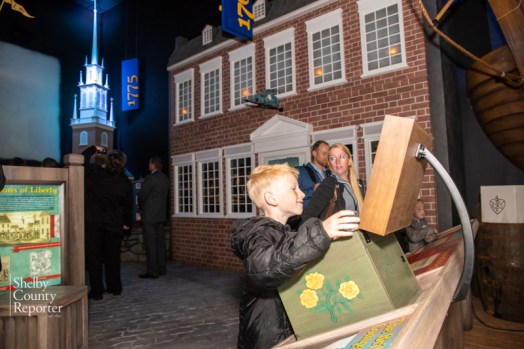 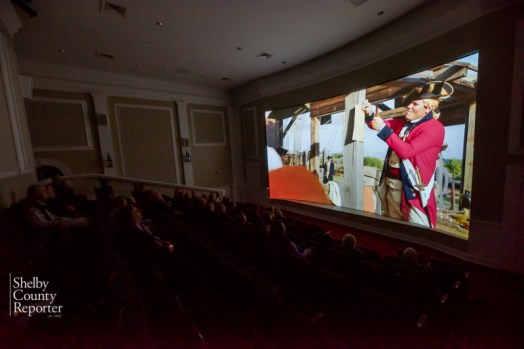 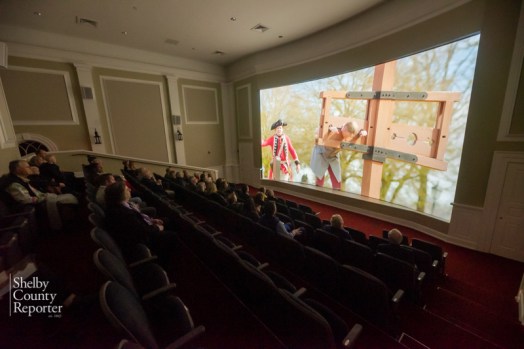 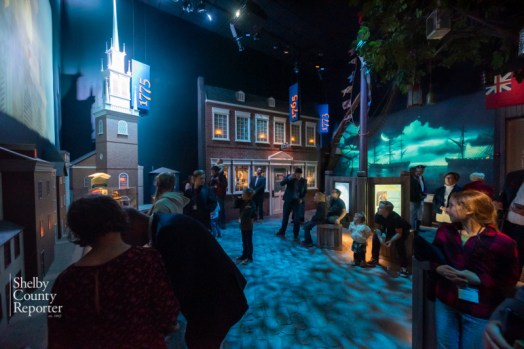 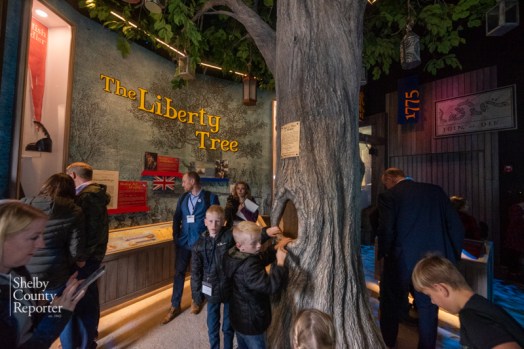 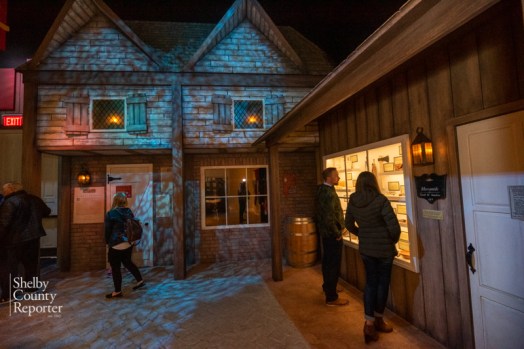 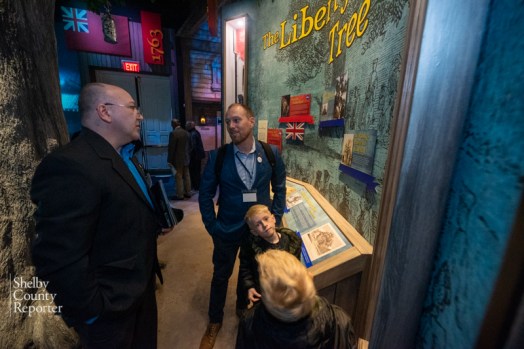 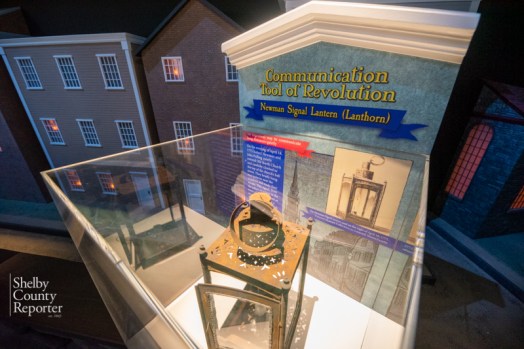 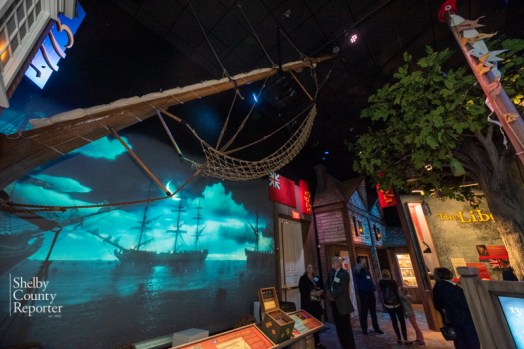 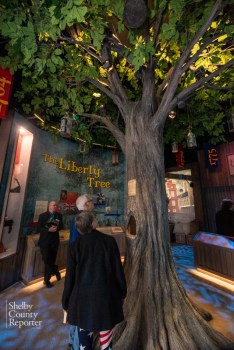 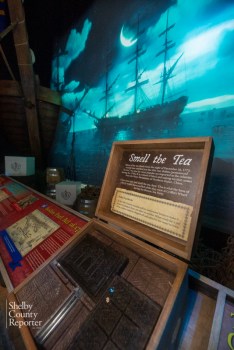 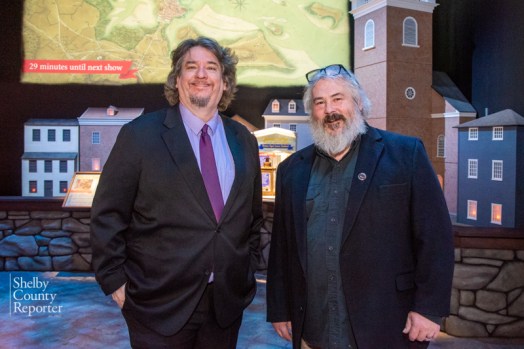 David Russell, the composer of the short film, with film director Stephen Lyons. 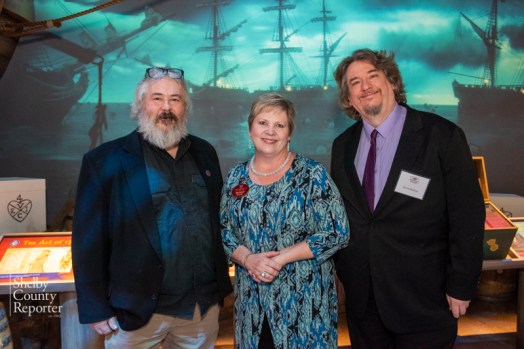 MONTEVALLO – Alabama Gov. Kay Ivey joined many other state and local officials at a dedication ceremony on Thursday, Nov. 4 to celebrate the grand opening of a new building at the American Village.

“I join our board chair and our board of trustees in extending thanks to each of you who have supported this work over the years by your presence, by your words of encouragement and suggestions, and by your generous gifts,” American Village Founder and CEO Tom Walker said. “I shall always express my firm belief that earnest labors here have been incredibly blessed by, and enhanced by, divine providence. Simply put, the right people have been at the right place at the right time to do the right things.”

With its compelling exhibits, the foyer transports visitors back to Boston on the eve of Paul Revere’s Ride.

The 104-seat theatre shows the original film “Choosing to Be an American People,” which was created for the American Village by cinematographer and director Stephen Lyons of Cinetique Images in Richmond, Virginia.

A groundbreaking ceremony for Independence Hall was held during the American Village’s 20th anniversary events in February 2020.

The new building and accompanying programs are designed to extend the American Village’s educational reach and impact by increasing its capacity to host more than 250,000 students, teachers and other visitors each year.

“We need not look very far to see the need for the American Village,” said Dr. Jack Hawkins, board chair of the American Village Citizenship Trust and chancellor of Troy University. “Today, the Village is needed more than ever in the history of this country. Indeed, it was Churchill who made the statement, ‘We shape our buildings, and then our buildings shape us.’ We know that Independence Hall will shape the lives of thousands and thousands of young people as they come to this place to learn the greatness of America, and it is a great place.”

When the American Village opened in November 1999, only four buildings existed: Washington Hall, inspired by George Washington’s Mount Vernon; the Courthouse, modeled after Colonial Williamsburg’s Courthouse of 1770; Founders Hall, which served as the first administrative building for the venue’s staff; and the original barn, which remained from the period when the land was a working cattle farm.

Now, Independence Hall joins more than 20 buildings on the American Village’s 188-acre campus, including replicas of the president’s Oval Office and the East Room of the White House; a colonial chapel reminiscent of Bruton Parish Church of Williamsburg; Concord Bridge, which spans a one-and-a-half-acre lake; and the National Veterans Shrine, patterned after Philadelphia’s Carpenters Hall.

Since its opening nearly 22 years ago, the American Village has hosted more than 750,000 students for educational programs engaging them in interactive learning experiences relative to America’s journey to independence.

Ivey thanked Walker for his work to bring his vision for the American Village to fruition.

“I firmly believe, and I know, that here in Alabama, we have not lost sight of our values and love for our country,” Ivey said.

The West Wing of Independence Hall opened for public visitation on Monday, Nov. 8, and is included in the general admission price of $11 for adults, $10 for youth and students, and $9 for seniors.

Admission is free to children ages 4 and under, veterans and active military members.

In addition to its education programs, the American Village hosts public programs on Memorial Day, Independence Day and Veterans Day, along with the annual Festival of Tulips.