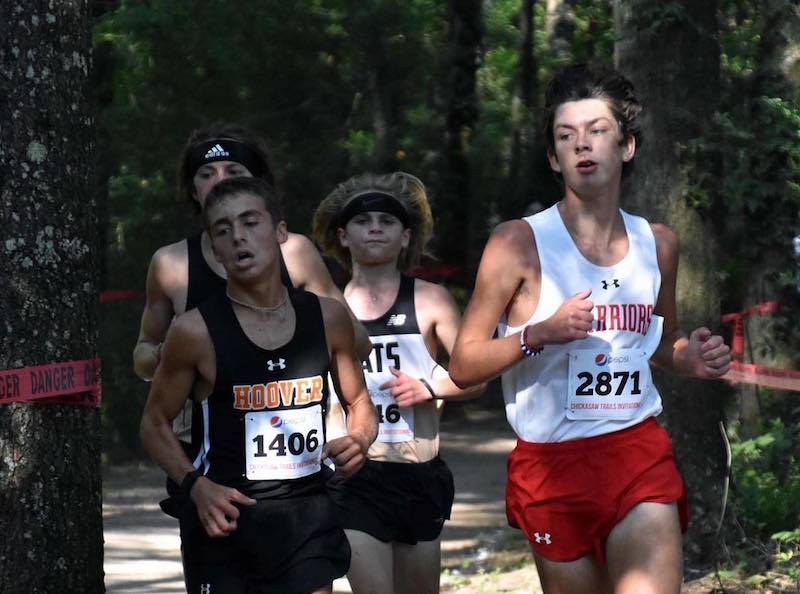 Thompson's Jackson Hamlin was one of many highlights at the Class 7A State Cross Country Championships on Saturday, Nov. 6. (Contributed)

OAKVILLE – As they did much of the year, Spain Park’s Mackenzie Culpepper and Thompson’s Jackson Hamlin highlighted local runners when they headed to Oakville Indian Mounds Park on Saturday, Nov. 6 for the Class 7A State Championships.

The two were the highest finishers individually at the meet with Culpepper earning the only top-10 finish of any local Class 7A runner.

The senior finished seventh in the individual standings after claiming second in the section championship a week earlier. Her time at the state meet, however, was faster than that of the sectional meet and was one of her fastest of the season thanks to crossing the finish line in 19:06.49, which was her third-fastest time of the season.

It brought to an end a special season for the senior, who finished inside the top 10 five times and inside the top three four times. She also set a personal record with a time of 18:46.30 this season to win the Dew It On The Trails event and had two wins this year.

As for Hamlin, it marked a special end to his senior season as well.

During his final season, he finished inside the top three a total of three times and never ran a race slower than 16:49 the entire season. Running a difficult schedule he finished inside he top 30 of all but one event, and that one event was one of the toughest races of the season where his lightning-fast time of 15:53.88 earned him 42nd.

As a team, the Thompson boys were the biggest highlight of the Class 7A meet. After qualifying their entire team for the first time in school history, the Warriors took home eighth in the team standings.

A big reason was the added help of three other strong finishes outside of Hamlin.

Cameron Prosser also added a finish inside the top 40, taking home 35th after finishing the race with a time of 16:32.58.

Teammates Matthew Hamlin and Jaxon McEuen both finished just outside the top 50 in 57th and 58th, respectively.

Spain Park posted consistent finishes in the boys race as well with three runners finishing just inside the top 50.

The Oak Mountain Eagles were led by Josh Stidfole in the state meet. The senior finished 40th with a time of 16:38.66. Matthew Womack was the other runner in attendance for the Eagles, and he finished 63rd with a time of 17:04.28.

In the girls race, Delaney Vickers added a top-40 finish for the Jaguars after running the race in 20:03.27 to claim 36th in the standings.

That helped Spain Park’s girls have the highest team finish of the event for local teams, claiming seventh overall.

Oak Mountain added two finishers in the top 50 with both Catarina Williams and Faith Scardino putting together impressive races.