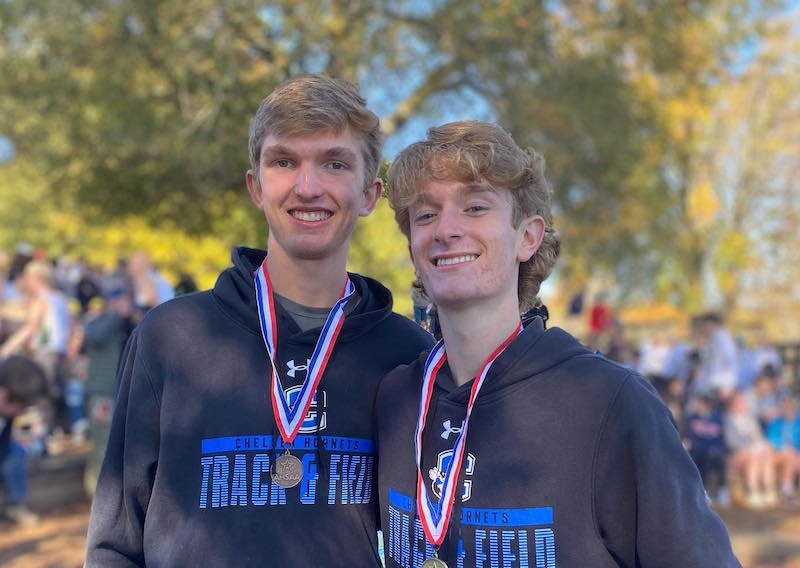 Chelsea's Miles Brush, right, won his second Class 6A State Championship in a row on Saturday, Nov. 6, claiming the race by nine seconds. He helped the Hornets finish third as a team for their highest finish in school history. (Contributed)

OAKVILLE – It almost seemed inevitable that when Miles Brush traveled to Oakville Indian Mounds Park on Saturday, Nov. 6, he would walk away a state champion.

The Chelsea senior entered the race with five consecutive first-place finishes, including the sectional championship a week earlier and had only finished one race with a time slower than 16 minutes (His section championship time of 16:23.42).

So when he hit the course, he built off his previous success and put together another clutch performance to repeat as the Class 6A Cross Country State Champion.

Brush ran the race in 15:23.96 to claim the championship, which was just two seconds off his pace set in last year’s win, while he finished nine seconds ahead of second place.

It brought to an end a special close to the season for Brush, who finished with six consecutive wins with his lone non win coming with a sixth-place finish at a national competition in his first event.

But just as impressive for the Hornets was their finish of third in the overall team standings, which marked the highest finish in school history under first-year head coach Trey Lee.

Behind Brush, Elijah Williams closed out a special season by finishing 13th, while Thomas Ludwig, Andrew Fielding, Camden Thomas and Hudson Williams all finished inside the top 50.

Williams posted a new personal record in the race, finishing with a time of 16:10.20 to play a major factor in school history for Chelsea, while Ludwig put together his fastest finish of the season with a time of 16:38.53 to also play a factor.

Behind Chelsea’s boys, it was Helena who finished the next highest in the team standings by claiming 10th.

The Briarwood Lions finished one spot lower in 11th as a team and were led by Brandon Dixon in 33rd with a time of 16:47.07.

Michael Kuper was Pelham’s highest finisher in 84th with a time of 17:43.43, which helped the Panthers finish 21 as a team, while Calera was one spot lower in 22nd thanks to Michael Jones’ finish of 118th behind a time of 18:16.41 in a race that finished close to 250 athletes.

The success didn’t stop in the boys race for the Hornets, as Cady McPhail closed out a special season with a top-five finish.

As a team, however, it was Briarwood who highlighted the girls meet. The Lions were led by Mary Grace Parker, who finished inside the top 10 thanks to claiming seventh behind a time of 18:46.74.

Bela Doss and Lena Anne Parker both finished highly for the Lions as well. Doss claimed 22nd behind a time of 19:46.62 to close out her sophomore season, while Parker finished 33rd with a time of 20:14.24 as an eighth grader.

Ty Cason grabbed a top-40 finish for the Hornets in addition to McPhail. Cason took 39th as an eighth grader, running the event in 20:26.32.

Pelham had two runners finish inside the top 50 thanks to impressive performances from freshman Lacey Lambert and eighth grader Emily Wester.