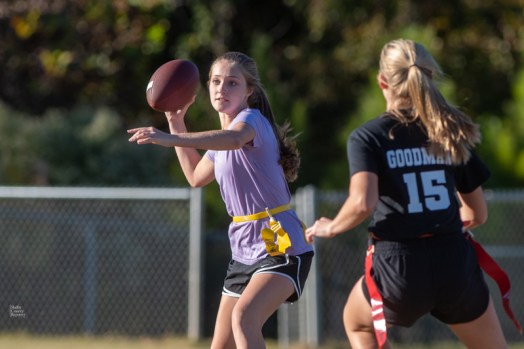 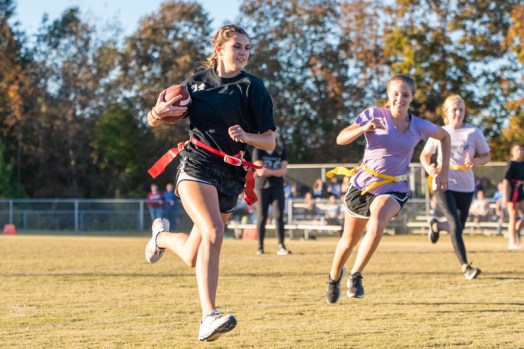 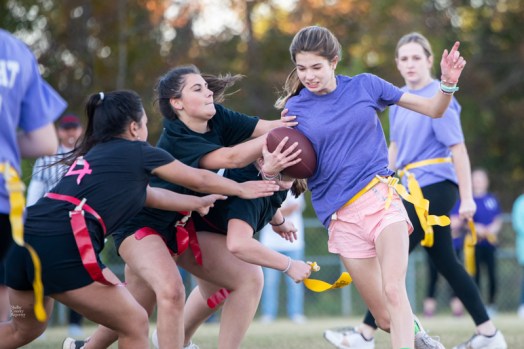 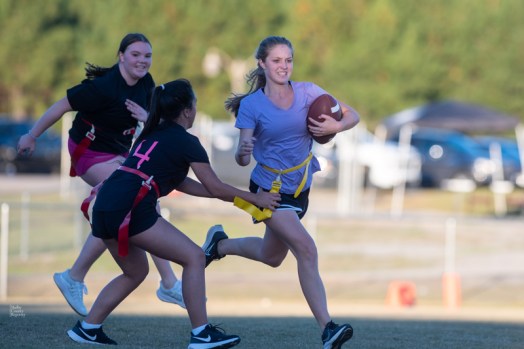 HELENA – On Sunday, Nov. 7, the Helena Belles held their annual Powder Puff game to raise money for a charity of their choice. This year, the Belles chose the Helena chapter of the Miracle League, an organization dedicated to making sports accessible to mentally and physically disabled individuals of all ages.

The organization has been working tirelessly to raise funds for a proper field that will be accessible to everyone of all abilities and disabilities, and Helena Belles President Christie Glawson gleefully announced to the crowd on Sunday that sales from the Powder Puff tickets raised $1,600 for the Miracle League’s mission.

Mary Liden, Director of Helena Miracle League, was ecstatic when she heard the news.

“That is fantastic, that just made my day,” she said.

“These events mean everything to us,” she said. “Our kids go to school with these girls and they know these girls. Just the fact they want to give back to this program is just amazing.”

The Miracle League began as a way to give children with disabilities equal opportunity to participate in year-round sports activities while engaging them with the other kids their age. Today, the organization has several locations across the country, and Liden said they will never discriminate.

Liden was the director of another Miracle League location when she made a life-changing decision.

“I was having to drive to Moody an hour away from our home, and I did that for about 10 years,” she said.  “I just decided every child deserves to be able to play in their community with other children that they go to church and school with.”

She approached the mayor of Helena with the idea of bringing a Miracle League field to the town. Liden said she fully expected a “no” answer, but was pleasantly surprised when he said yes. There was, however, a catch.

“He just explained we wouldn’t have the funds to pay for it, and we would have to raise the funds ourselves,” Liden said.

Liden went to work immediately, canvassing the Helena community and getting the word out to help begin fundraising. She received a warm welcome from everyone particularly families of physically and mentally disabled children. Helena’s community has a large population of special needs individuals, and the idea of having a sports field everyone could enjoy spoke to the masses.

“The City of Helena donated the land to us, and then Shelby County came in and built our ADA accessible bathrooms for us,” Liden said. “Now all we need to do is raise the funds for our field, and we have a budget of $1.5 million to get everything done.”

Liden said despite the intimidating budget goal, she will never give up. Until the field is built, the Miracle League is playing at Joe Tucker Park on the dirt field. Liden said it is an adequate place holder except when it rains.

“We’re still accepting new players,” Liden said. “And we will take everybody, they don’t have to live in Helena. They can come from Pelham, Hoover, Alabaster, wherever. We just want them to come play ball with us in a safe place.”

Cacciatore said to have an organization like Miracle League is “huge.”

“My son grew up watching his siblings and cousins play sports and he always wanted to participate, but he couldn’t because ability-wise he was just not able to,” she said. “When we found other Miracle Leagues and when they came to Helena, it was so huge because we were having to drive out to Calera.  Having it in our hometown and not having to drive 20 minutes away for him to play on a Tuesday night just means everything.”

She added seeing the positive shift in conversation regarding disabilities is another thing that warms her heart.

“It’s normal to them spending time with and seeing kids with disabilities versus, like, when I grew up they were often kept to the side, which is horrible,” she said. “But the fact now our kids are included in everything, it’s such a relief to us as parents that our kids are accepted and loved.”

The Miracle League is always open to sponsors and donors to help make their plans come true. Liden encourages people to volunteer, even if it’s just one night a month. She said at the end of the day it’s all about helping the kids.

“We want them to be in a safe environment where they aren’t being judged or feel like they’re being looked at like they don’t belong,” she said. “This is for them; It isn’t just for my son, it’s for everyone who has a disability.”

For information about the Miracle League in Helena, Liden encourages people to reach out to her at (615) 300-3047, or visit the Helena Miracle League Facebook page to donate.