Maxine was born March 18, 1930, in rural Fayette County, the first daughter of the late Leon O’Lenthus and Lillian Williams Holliman. She went on to become a well-known professional woman in Birmingham in the 1960s. 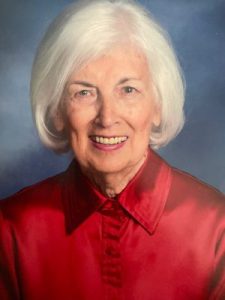 After graduation from Fayette High School, she attended Alabama College, then the state college for women, now the University of Montevallo. Maxine was a striking young woman, tall, fashionable, and intelligent, and Montevallo provided her the opportunity to make new friends and to participate in many rewarding activities. She attended college two years before going home to help support her family, after her father became ill.

After her father recovered in 1951, she accepted a job in Washington, D.C., with the FBI.

In 1956, she moved back to Alabama, taking a job as a receptionist at a law firm in Birmingham, Smyer White Reid & Acker. Later she became a legal secretary and office manager there.

While in Birmingham, she enrolled in modeling school and modeled for many organizations in the area.

In 1972, she joined Pitney Bowes in Charlotte, N.C. Later, she worked at the company’s branch in Nashville, as well as branches in Jacksonville and Tallahassee, Florida. She won a number of company awards for her administrative work and sales.

In 1979, she launched a new career in real estate sales in Tallahassee, and she remained in the real estate business there until she retired and moved to Montevallo in 2010 to be closer to family.

Her family thanks the staff at Fair Haven for the kind attention and care they showed her.

Friends can make contributions in her name to the First Baptist Church of Montevallo or to the University of Montevallo.