No. 5 Briarwood’s season ends in 2nd-round loss to No. 1 Clay-Chalkville 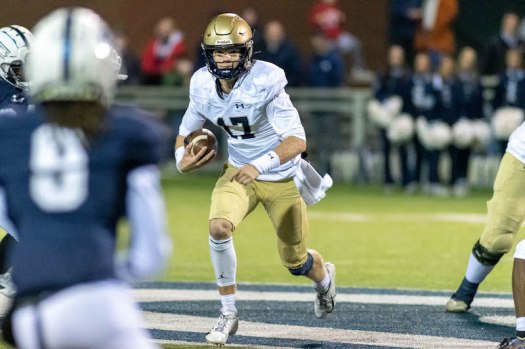 Briarwood quarterback Christopher Vizzina looks for space against the Clay-Chalkville defense. He had another special game, but it wasn't enough in a 56-21 loss to the No. 1 Cougars. (For the Reporter/Neal Wagner) 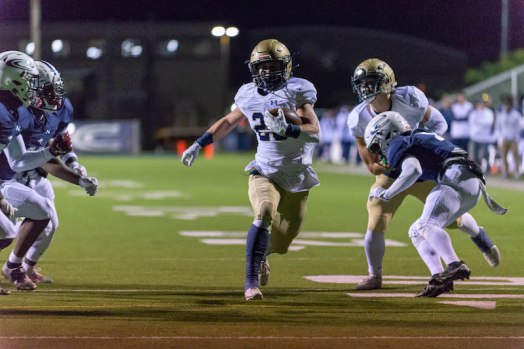 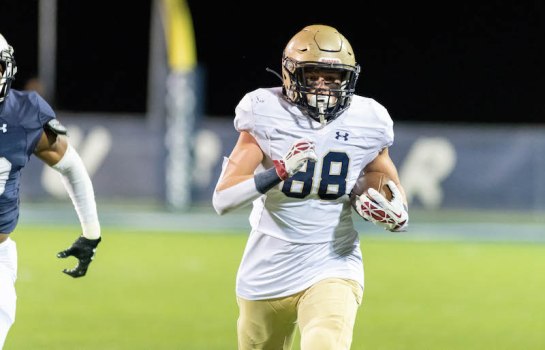 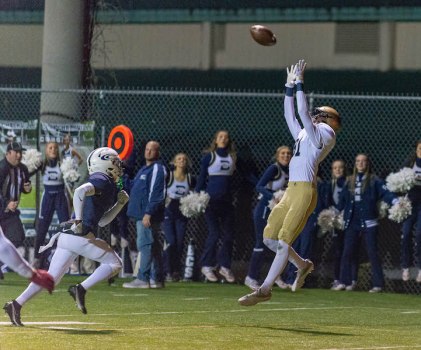 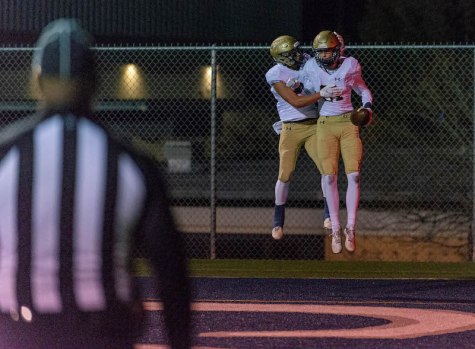 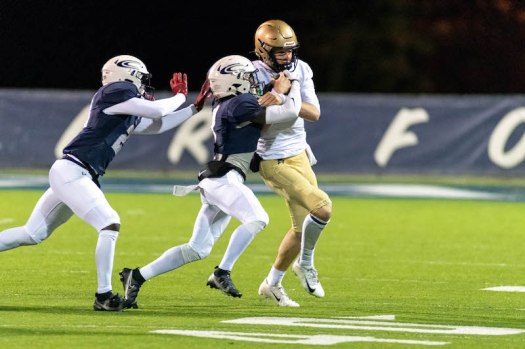 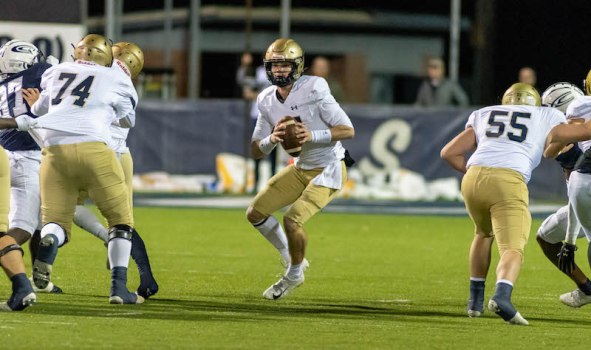 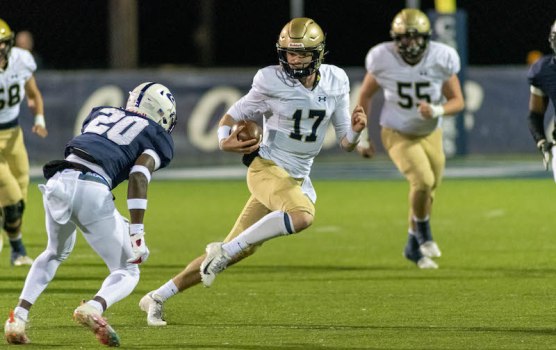 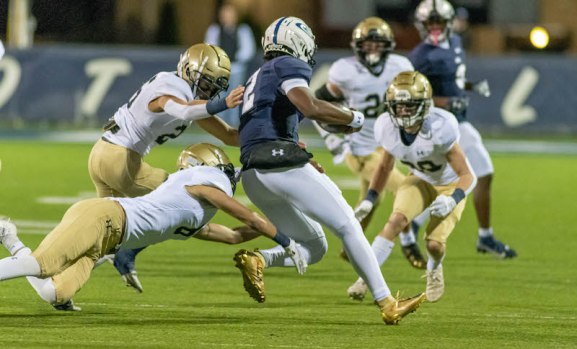 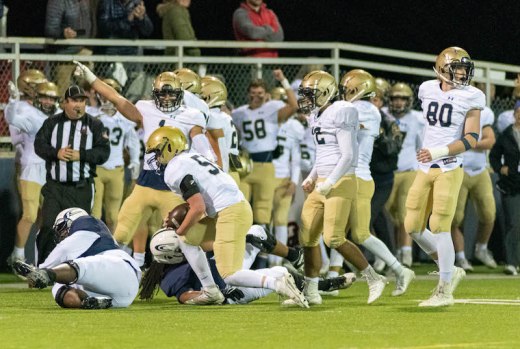 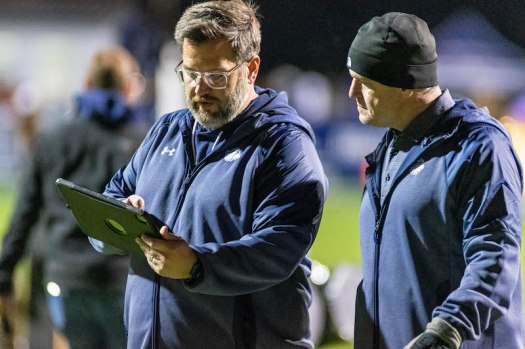 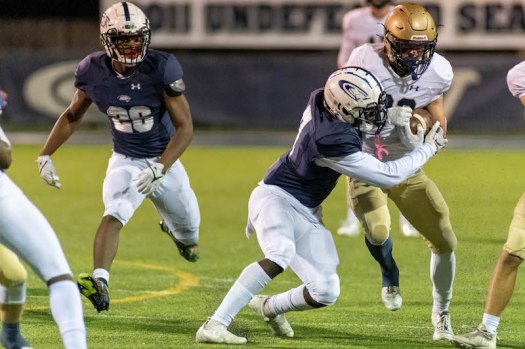 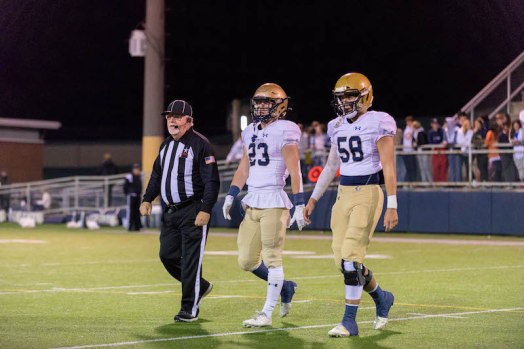 PINSON – Another impressive season in the 6A classification came to an end for the Briarwood Lions on Friday, Nov. 12 after a second-half surge from No. 1 Clay-Chalkville led the Cougars to a 56-21 victory.

“I mean, you know, they’re a great team,” Briarwood head coach Matthew Forester said after the game. “I’m really proud of our team and the way they fought, but Clay’s got some weapons and they did a very good job. I can’t thank our seniors enough for how well they led us throughout the year. A 10-2 record in 6A is not an easy thing to accomplish, and we just ran into a good team tonight, but I’m incredibly proud of this team and the way they fought tonight.”

The Cougars came out of the gate roaring, as a 57-yard catch from Mario Craver set up an opening-drive touchdown and put the home side up 6-0.

Briarwood followed the Cougars’ touchdown with a scoring drive of its own, breaking through early stops from the Clay-Chalkville defense en route to Luke Reebals running in a 14-yard touchdown for a 7-6 lead.

The next drive was a big showing for the Briarwood defense, which after allowing a fourth-down conversion within the 5-yard line, came up with four straight stops and sent the Cougars offense off the field after 16 plays.

The Lions went three-and-out after the turnover on downs, however, and Clay-Chalkville capitalized quickly when Jalen Mbakwe brought home a punt return touchdown to retake a 14-7 lead.

The Lions then rode the run game after they got the ball back. A Reebals run set Briarwood up in Clay territory before Christopher Vizzina took a great block and ran with it for 49 yards and a touchdown to tie the game at 14.

Clay-Chalkville answered on the ensuing drive on a screen pass to Marquarius White, one play after Christon Black reeled in a 43-yard reception, which extended the Cougars’ lead 22-14.

With just 2:42 remaining in the half, both teams managed to score before the halftime break in an exciting finish to the half.

Briarwood ran an efficient seven-play drive, with Reebals running down to the Cougars’ 34-yard line.

A pass interference penalty on the next play eventually led to a 19-yard touchdown pass from Vizzina to Jay Butler.

The Cougars answered in just two plays, however, with a 40-yard touchdown pass to a wide-open Nathan Owens, and after another two-point conversion, Clay-Chalkville took a 30-21 lead into the locker room.

Briarwood’s offense was bottled up the rest of the night and didn’t score in the second half.

After a punt to start the half, Clay put together a 15-play scoring drive behind a goal-line rushing touchdown for a 36-21 lead.

On their next offensive drive, the Lions turned the ball over on downs, as Butler’s fourth-down catch couldn’t overcome an 8-yard loss on second down after the Lions had to fall on a loose ball.

Clay-Chalkville, however, added three more touchdowns before the night ended to seal Briarwood’s fate, including a goal-line touchdown from Edward Osley and a pick-six, as the final score read Cougars 56, Lions 21.

“I think it just snowballed and one bad thing happened, and all the sudden, we’re behind the chains and having to throw the ball more to try and get quick scores and it just didn’t go our way,” Forester said of the second half. “The guys battled so hard, and I’m so proud of them.”

It was an emotional scene on the field postgame, where Lions players, coaches and fans embraced one another with hugs and kind words as reality began to sink in that this would be the end of the road for this year’s Briarwood team.

Forester said he was proud of how far his group of young men had come.

“I’m so proud of these seniors, they led so well, they worked so hard for all four years and the legacy they left, they left a really impactful legacy so super proud of them for that,” he said.

While Briarwood’s season ends in the second round with a 10-2 mark, Clay-Chalkville advances to play Gardendale at home next week in the 6A quarterfinals.