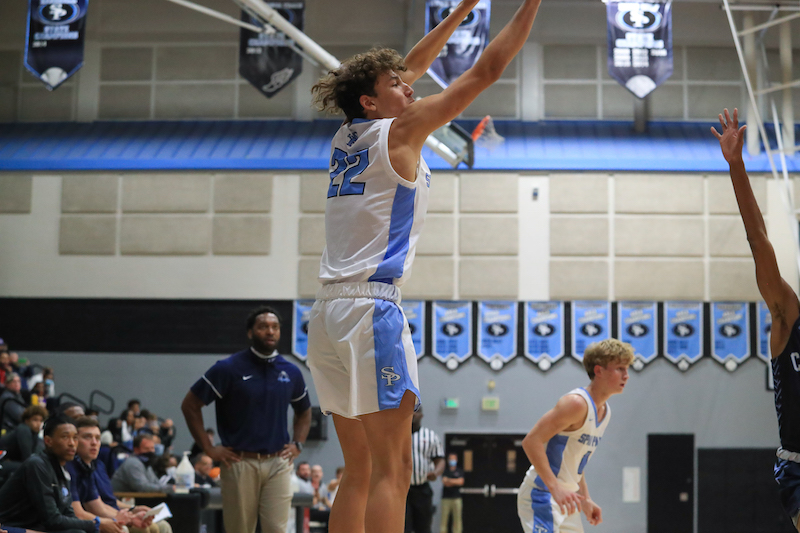 BIRMINGHAM – With the Spain Park Jaguars entering the season replacing several key contributors, the hope was to show growth for new inserts into the lineup on Thursday, Nov. 11, and that’s exactly what they got.

The Jags ultimately lost on a 3-pointer in the final seconds to drop the opener 58-57 to Grissom, but they saw production and clutch play from several players down the stretch.

Down 56-54 in the final 20 seconds, Spain Park got a big play from Josh Harrington to take the lead. Harrington powered through contact for a layup and then drained a free throw for the three-point play to make it 57-56 with 10 seconds left.

Grissom, however, came back down the court and Butta Johnson crossed over before hitting a clutch 3-pointer with 1.5 seconds left to make the difference in the final score.

The Jags did show balance with leading senior returners Harrington and Colin Turner posting 13 and eight points, respectively, while junior Zach Gray stepped up in a big way with 14 points to lead the team.

It marked an impressive showing against a talented Grissom team in the Jaguars’ first game of the season.

Grissom, however, entered with one game under its belt and it showed in the early going.

The Tigers, who beat Hazel Green 84-46 to open the season a week earlier, used their confidence early in the game to build a 13-11 lead at the end of the first quarter.

The Jags were able to take the early lead at 6-2, but Grissom responded with a strong run to end the opening period.

The second quarter saw the Tigers build on their offensive confidence with a 17-point quarter, while the defense matched its first-quarter effort to take a 30-22 lead into the break.

Spain Park, however, got a chance to face some early adversity in the season, and the Jags responded.

They started the second half on a 5-0 run to quickly trim the deficit down to three points.

From there, they battled right alongside the Tigers, which led to a 45-40 game in favor of Grissom going to the final quarter.

Grissom never could create the separation needed to put the Jags away, and with 4:20 left to play, Gray hit a 3-pointer to make it 47-44.

That was the first of many big 3-pointers for Gray down the stretch. After the Jags fell behind by five again at 56-51, he hit another big shot from beyond the arc.

This time, he drained it with 22 seconds left on a must-make shot to cut the deficit to 56-54.

Then, after getting the ball back, Harrington gave the Jags the lead with his and-1 with 10 seconds to play.

After trailing the majority of the game, the Jaguars had finally jumped in front.

The Tigers, however, didn’t waist the effort they had put in up to that point, as Johnson hit the clutch game winner.