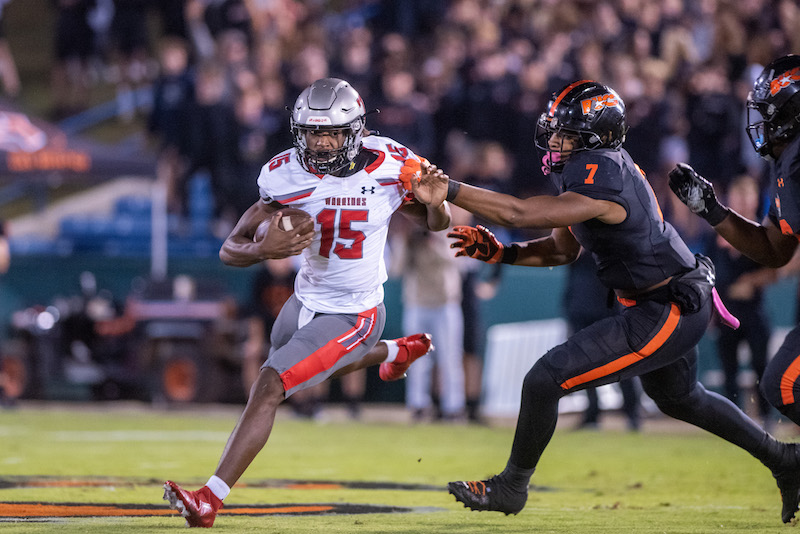 Thompson quarterback Conner Harrell is expected to return as the starter for the Warriors this week hoping for a shot at redemption after losing 24-21 on Oct. 22. (Reporter photo/Keith McCoy)

For the fifth year in a row, the rematch is a go.

This Friday, No. 2 Thompson will travel to the Hoover Met for a Class 7A semifinal showdown with No. 1 Hoover and a spot in the state championship on the line.

The matchup will take place one month from the regular-season battle between the two that saw the Bucs, No. 2 at the time, upset the Warriors 24-21.

It was a game Thompson led 21-10 at the half, but starting quarterback Conner Harrell didn’t take a snap in the second half after injuring the thumb on his throwing hand late in the half.

It couldn’t have come at a worse time, as the Warriors had arguably their best quarter of the season going into the halftime break.

Without Harrell in the second half, however, they couldn’t find that same magic, seemingly starting to doubt themselves offensively, while a tired defense was on the field the majority of the half.

Hoover quarterback Bennett Meredith capitalized, not batting an eye en route to leading Hoover to 14 unanswered in the second half, including a touchdown in the final seconds to seal the win.

Now, Thompson gets a shot at revenge with Harrell back, while Hoover is dead set on getting back to the state championship for the first time since 2017.

That was the last time the Bucs beat the Warriors in the semifinals, with Thompson winning the last three in this exact same situation.

For those thinking Thompson is just going to waltz into the Met and get revenge with ease, let me squash that right now.

Nothing about this game has been easy for either team the last five years, and the game just a few weeks ago showed these are arguably the best two in that span.

Whoever wins this game will have to go out and earn it.

Seeking revenge can drive you to focus and play hard, while looking to claim your spot back atop the thrown can give you the hunger necessary to work hard; but to win, it simply comes down to execution and likely a few breaks you aren’t expecting.

Many point to Harrell’s injury as to the reason Thompson lost the first game, and while they did play a major role in the outcome, it wasn’t the sole difference.

Bennett Meredith and his receivers were the difference.

Thompson had an 11-point lead at 21-10 and hadn’t given up more than nine all season.

At that point, you expect the defense to come out more prepared and motivated to close the game out in the second half.

It was hard to see the Warriors giving up more than another touchdown with the way they had played all season.

And the Warriors did still find ways to make life difficult at times, but the Hoover offense didn’t back down.

With pressure in his face most of the night, Meredith stepped up and fired throw-after-throw despite getting hit hard on many of them by Peter Woods seemingly every time.

Meredith, however, stood in and didn’t shy away. 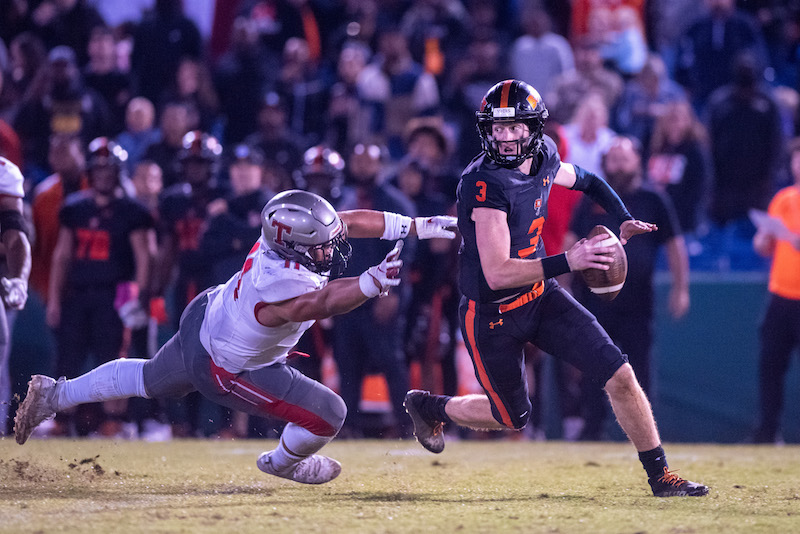 It also helped that top target RJ Hamilton was back to help build his confidence. The star receiver, who was injured a lot of the year, stepped in and had 10 receptions for 152 yards.

Those two, along with tight end Jabari Gaines, who had the game-winning touchdown catch in addition to one other, helped the Bucs pick up the win.

It was all because the offense faced the pressure of the Thompson defense with a strong game plan of Meredith standing strong and getting rid of the ball to his talented wide outs.

So now, what is the game plan for each going into this crucial showdown?

Thompson will clearly be trying to find ways to pressure Meredith and get him off his game early, while playing tight to receivers. The Warriors have to be focused on shutting down the pass and making Hoover run the ball to try to beat them, which nobody has been able to do successfully all season.

As for Hoover, they’ll be looking for any way possible to find creative ways to handle that pressure of Thompson’s defense.

The other big looming factor in this game is that of Harrell.

In that second quarter of the first game, Harrell and the Warriors looked unstoppable with the 21 points they put on the board.

Coming out of the locker room, the talk was how they got the ball first and would be looking to make it 28-10 and pull away.

We don’t know what would have happened with him in there, and now, we get to see him again, but will he be himself.

With his right thumb heavily wrapped, will he be able to run the ball if needed and protect it? Will he be able to throw on the run? How will his deep ball look from an accuracy and touch standpoint? Will his passes have the same zip?

Last week, he came out in the second half for the first time since his injury and looked like himself going 10-of-13 for 111 yards and one deep passing touchdown.

That, however, came with the Warriors up 24-7 and not as much pressure as he’ll face starting this week.

That said, the positive for Thompson’s offense this time around is that they can at least feel confident in whoever is out there, something the Warriors struggled with the first time around.

Sims has proven he can at least give you chances to score and now has experience rather than just being throw into the fire in the biggest game of the season like he was a few weeks ago.

With what I saw last week, Harrell should be good to go and will likely be fine for the entirety of the game, but if Sims is needed, this time, the offense would be more confident.

And that’s where the biggest improvement has to take place.

While Thompson’s loaded defense will be as motivated as it has been all season to play as fast and physical as possible, the offense will have to find a way to be more productive against a Hoover defense that is giving up 13 points per game and held the Warriors to their lowest total of the season by a large margin in the regular-season matchup. 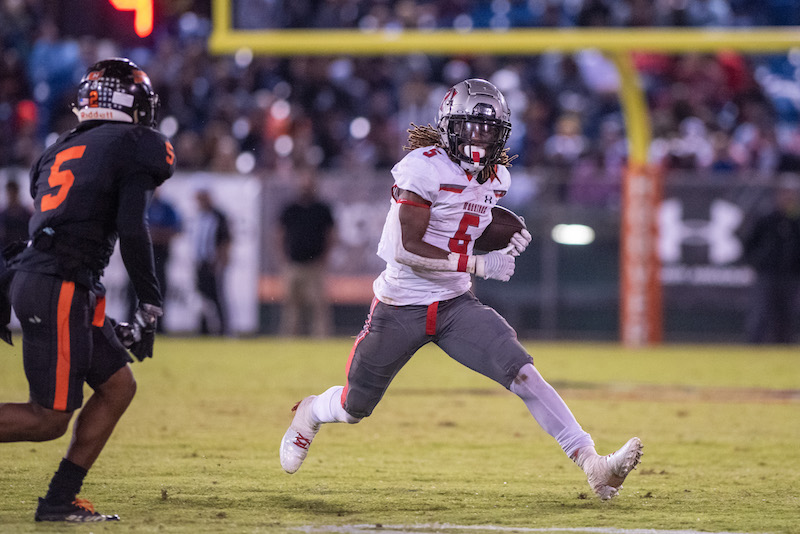 Justin Pegues will look to continue a hot streak for Thompson’s offense when he suits up for the Warriors Friday night. (Reporter photo/Keith McCoy)

With the talent on that side of the ball, it’s a unit that has to perform up to its skill level. Justin Pegues has to remain as evasive as he has in all facets of the game, while Ryan Peppins has to emerge as the leading receiver he is and Jaylen Ward needs to continue to have a strong finish to the season as a major downfield threat.

If that happens, and Thompson can find its way into the 30s or 40s in this game, that will make all the difference in the outcome because of the defense they have.

Whoever comes out and is able to execute that goal will win.

In the last nine matchups, it has been rare for either to score less than 21, with that happening just once to each team.

So expect this game to be similar to the first from a scoring standpoint with a slightly low scoring first half, and the winner coming out stronger on the offensive side in the second half.

Both teams want to get off to a good start, but I’m not really sure that matters, as we’ve seen double-digit deficits overcome in the second half multiple times the last several years, including this year’s matchup.

It is also tough to predict form a revenge standpoint.

So where does that leave us?

Ultimately, I think we have another thrilling game that either team can win.

Thompson is out for revenge, which is scary to think about when you look at the talent on both sides of the ball, while Hoover once again won’t be scared with plenty of motivation on the Bucs’ side as well.

But it is so difficult to beat a team twice in one year, especially one as talented as Thompson’s.